Lest we forget: Cylinder numbering for the four, according to Mr. C.W. Waller: 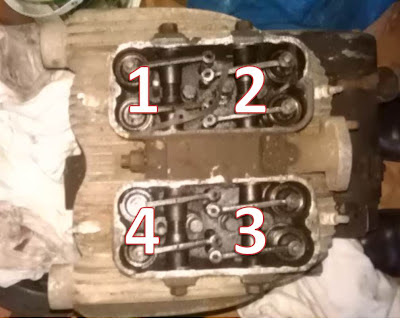 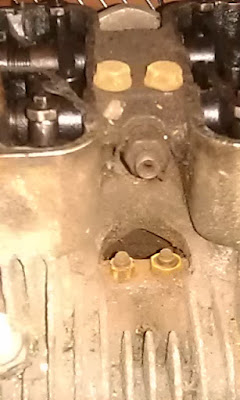 Next job is to lift the head. We remove the four sleeve nuts inside the rocker boxes; we loosen the twelve nuts around the outside of the head and, using a 1/4" BSW ring spanner especially reduced to fit in a confined space as shown in the picture on the left we remove the final four nuts.

A curiosity here. The front two studs were both fitted with two nuts - one with a regular 1/4" BSF nut, the other with a reduced hex 1/4" BSF nut. One is tempted to think that was to allow a bit more room to throw a wrench around, but I suspect it was more a question of convenience - whatever came to hand. The two nuts were I guess fitted to protect the threads.

In theory, according to the book the next job is to lift the head and place two 1/8" wooden strips between the head and the block, to allow us to raise the head and then to actually remove the nuts from the twelve studs. 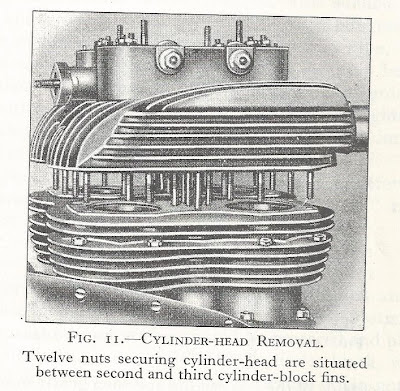 The operation will be something like that shown in the picture from the Floyd Clymer Ariel Motorcycle Owners Handbook (3rd Edition) shown as Figure 11 below.

Well, I hope it will. It hasn't happened yet. The head is stuck fast with the adhesion of decades of setting time of a whole tube of Hermetite, by the look of it.

I have taken the hide mallet and waved it around near the engine in a vaguely threatening manner, but I don't plan to do anything else with out a bit more thought and a plea to the AOMCC forum members.