As I've mentioned before, I have a very nice continental-looking battery box that came with the bike. Here it is: 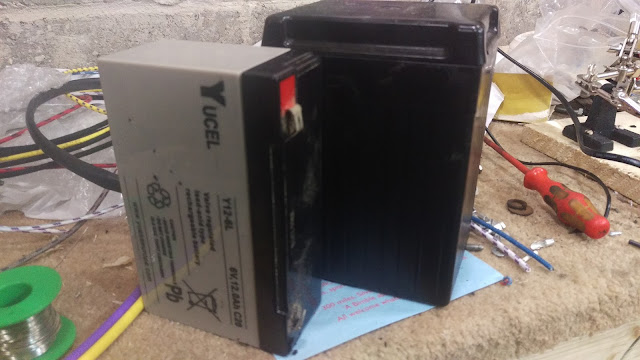 The original PUW7E battery specified has a 10 Ah capacity, which is the peculiar way in which our industry has chosen to illustrate the energy capacity of a battery - it means it is capable of delivering a current of 10 Amps for an hour, or 20 Amps for half an hour, or 5 amps for 2 hours - you get the idea.

My little Lucas E3HM dynamo gives me 40W at some speed, but I don't know what speed - something like 6.5 A So, in order to use my bike for a reasonable period of time without being charged (for when I choose to ride at 10 mph in a traffic queue on the M25 (when did you last see a W/NG do that?)) I need a battery of sufficient capacity to deliver sufficient current for the time I am riding so slowly that the battery is not charging, without running flat and plunging me into darkness.

So how much current do I use? Let's work it out:
Which gives us around 11 Amps, allowing for infrequent use of the stop light and horn. A 10 Ah battery will be flat in 54 minutes. Reasonable? No. The headlamp bulb is too big. What about this:
I don't have a Lucas PUW7E battery, nor am I likely to find on - and in fact, why would I want a rubber box full of sulphuric acid attached to my bike? I will use the Yuasa 12 Ah VRLA battery I have on the shelf...

That will give me 2 hours of operation of a 35 W halogen before it goes flat. Since a year or so into having the Bantam, Beattie has been using a sealed lead-acid battery - the electrolyte is treated to form a gel, so it can't flow out, and the chemistry is altered somehow (I'm not that clever) so that when the battery is charged and would normally produce free oxygen & hydrogen, the gases recombine as water, replacing the lost liquid in the cell. This is really neat for a motorcycle, because it means you can fit them wherever you want (they are really small), they don't drop nasty acid all over your bike (how many rusty battery carriers have you seen?) and because they are made for things like burglar alarms, they are really cheap. The SQ Four has had two of them on board for a few years now.

The downside is you cannot abuse them as you can a traditional wet battery - if you overcharge them and lose the electrolyte, you can't replace it.

The thing is, I came to use one of these things the first time because I realised the rudimentary (putting it kindly) charge control system on the Bantam was boiling the original wet battery - so I added a modern solid state regulator/rectifier (from the marvelous Rex Caunt Racing) and was able to use a gel battery. The one on the Bantam is tiny - about 3.4 Ah I think, at 12 V, and has coped perfectly for several years. It even remains charged through the winter, something the old wet battery could never do. The SQ4 has two, combined to give 20 Ah and controlled with an V-Reg regulator.