Yearning for another British bike after the Matchless (read about it here) I found my AJS Model 30 as a wreck in a Sussex garden, in about 1984. It didn't look like this:

But, just like this pretty bike, it was a genuine original bike, a 600 cc parallel twin still with the tin chain case and with the Girling shock absorbers with the clevis ends that replaced the 'jampot' shocks from the previous year.

It was a rideable wreck when I got it, and all these years on it is a job to ransack the memory for parts I bought and & work I did. Moving house recently I did find a collection of photographs of the bike in the 'before' state, some of which I will reproduce here when I get around to scanning them.

It was registered under its original number, MAP984, and the V5 came with the bike. I was living in Herne Hill, South London at the time, so getting to Russell Motors in Battersea was no problem; Joe Francis Motors in Eltham was still trading then and that wasn't much further away. I'd learned all about these shops during my Matchless rebuild, and as I was living in London I could make use of Hamrax Motors as well. 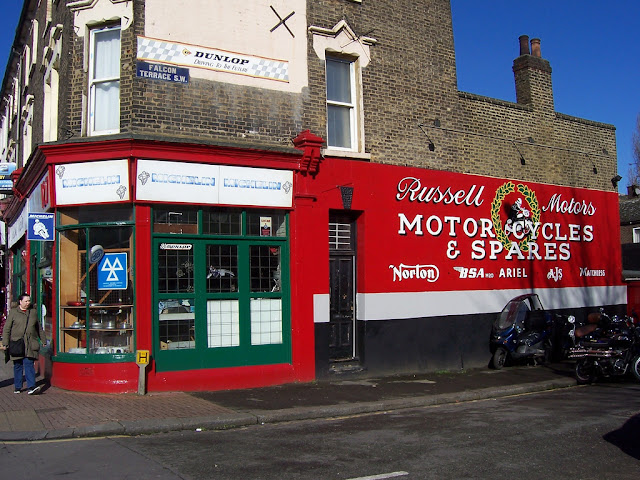 It seems incredible now, but I restored that bike whilst I was a student at the Polytechnic of the South Bank, studying mechanical engineering. I was already in the AJS & Matchless Owners Club, and having a lot of experience gained from the G2CSR this next restoration held no fear.

The original mudguards were in a terrible state (worse than these) as you will be able to see when I find the 'before' pictures.

I bought some fibre glass mudguards from club.

I had the monobloc carb resleeved, bought a set of exhausts and a seat from Armours, and I had the frame & tinware painted at Joe Francis; with the tank now resplendent in its blue paint, I replaced the moth eaten tank panels with a replica set of chrome tank panels that did not fit.


During it's time at my Mum's, I recall I had to change the clutch on my 998 Mini Cooper. This done, I can vividly remember testing the clutch at the end of a long, tiring day, easing my foot up with the car in gear, feeling the bite. Unfortunately, rather than taking the car out of gear prior to lifting my foot off entirely, I let it lurch forward into the garage, and right into my gleaming Model 30.

That will be another set of fork stanchions then, and I took it back to London. It appeared at our final year degree show on my stand.

After graduating, we made a long camping trip in Wales. The dynamo failed somewhere in Gloucestershire and I spent the next few days with a friend on a Laverda Jota for a headlight and another on a C90 for a tail light. Fortunately no-one noticed I had no lights.

That year I was sporting a dashing range of double-layered lumberjack shirts: 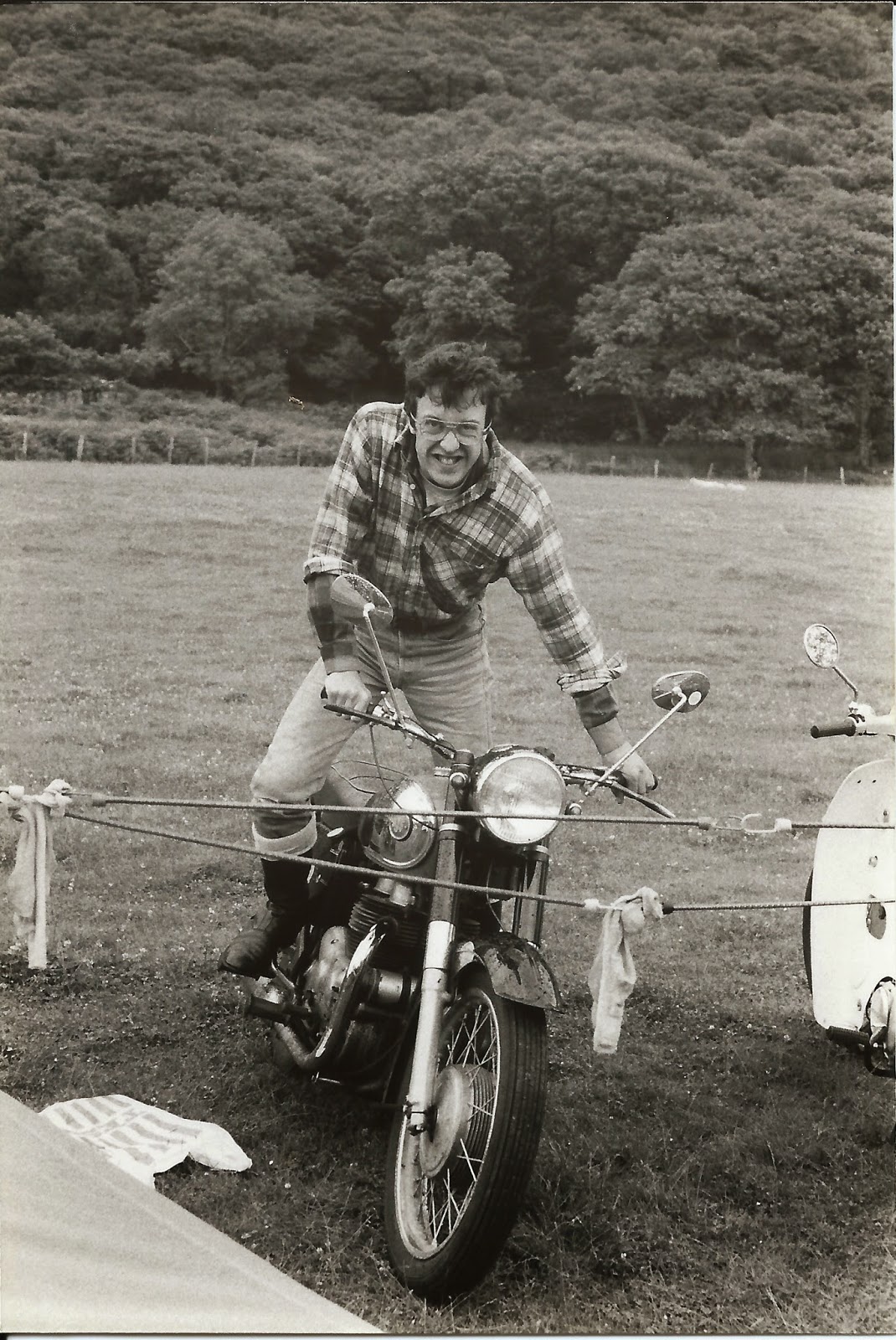 The bores were wearing out: the was a lot of burnt oil smoke in the Elan valley 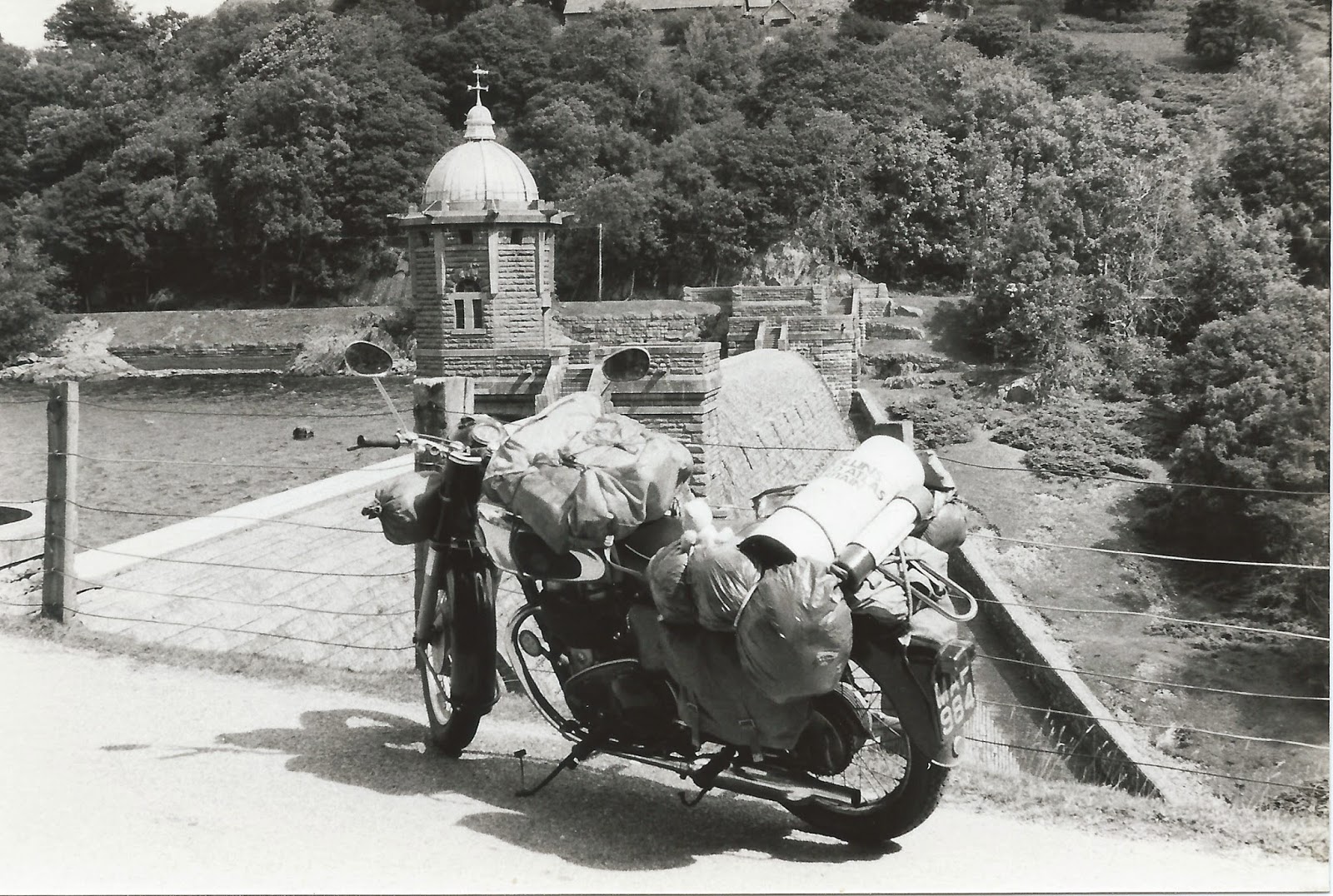 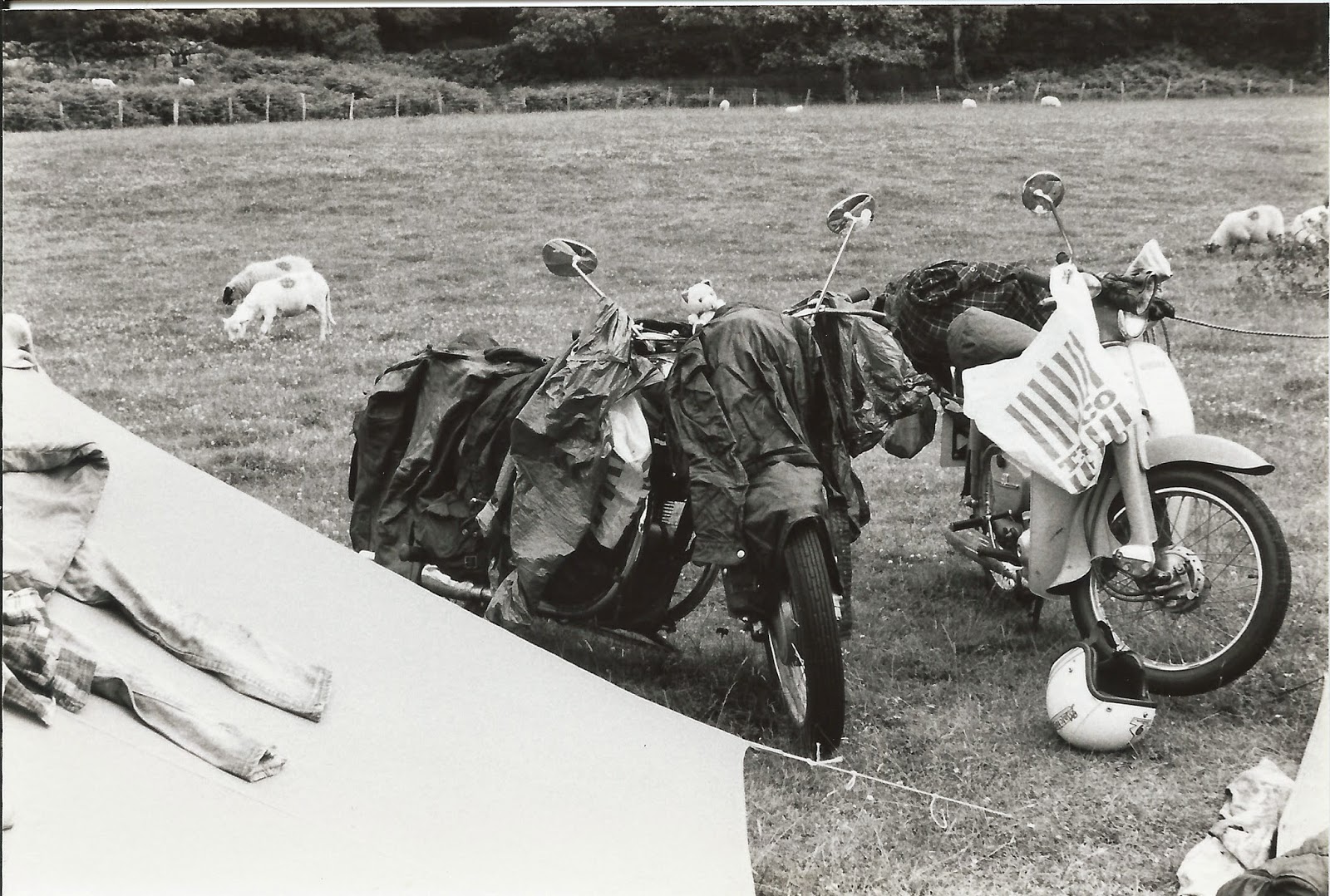 Early morning view from the tent: 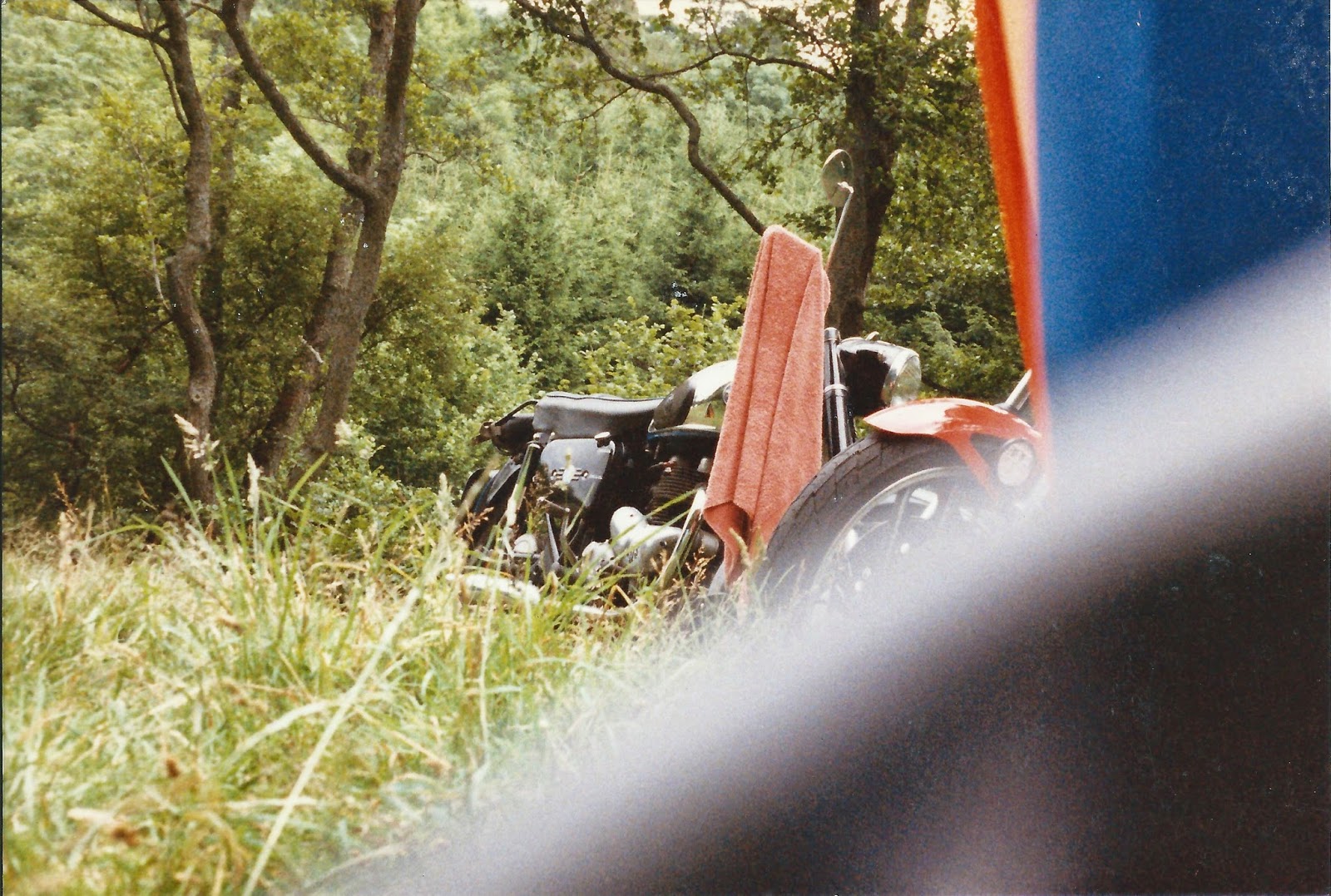 That's me, fresh young graduate of about 23: 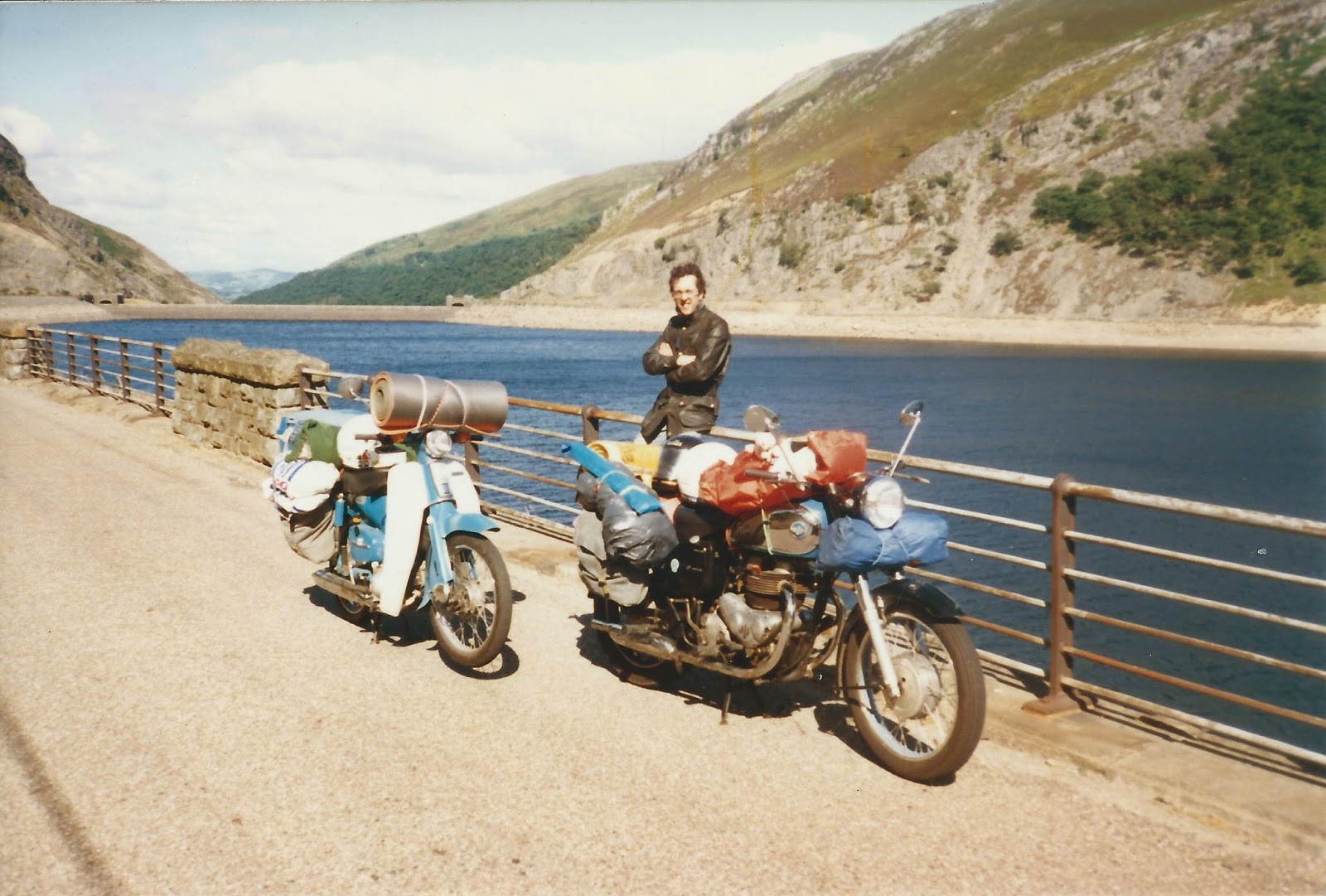 It was while chasing around these lovely reservoirs that I began to realise that wherever I went, I smoky haze seemed to follow. A rebore was on the cards. 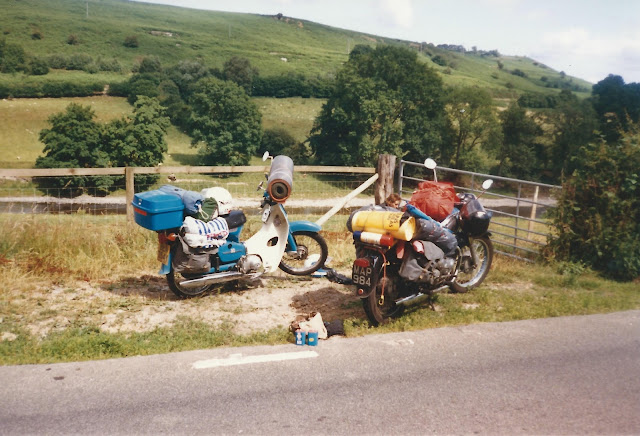 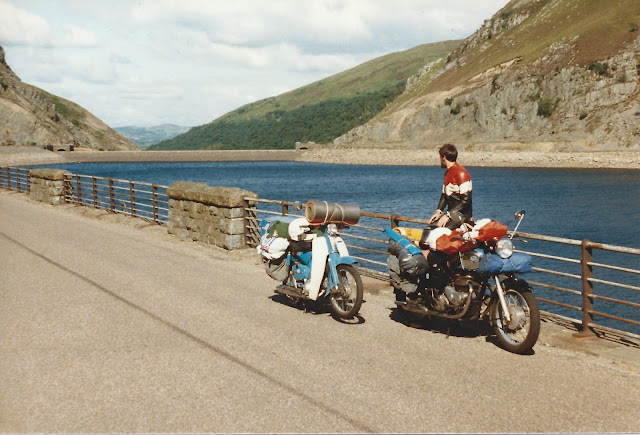 Later on in the same trip; by the time we got up to Harlech the weather had turned a bit ugly. 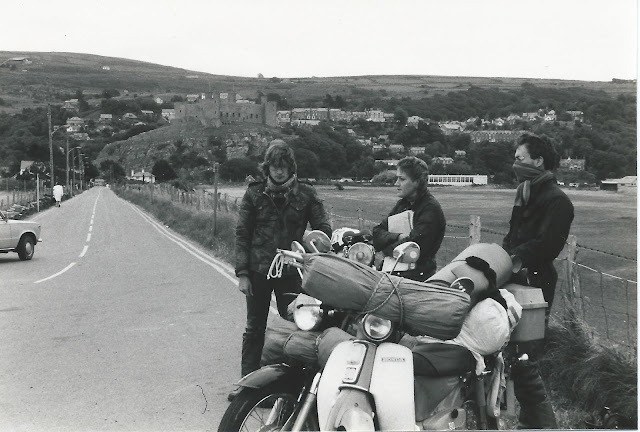 Later that summer I had the rebore done and made a few trips to Brighton and the south coast, and leaving London for the last time I made a very wet trip to Norfolk to start a job at Lotus, which the AJS handled faultlessly.


We lived on Carrow Road for a while, next to the football ground, and April was parked outside. I used her for work occasionally (for the short ride to Hethel) and she came with us when we bought our first house. The house was a Victorian terrace with a shed in the back garden, and it was a right pain to get her out each day and like so many blokes with kids on the way I sold her on... my last bike for a few years, until an eBay mouse clicking accident bought the Bantam my way and that, as they say, is another story...