W/NG - a bit of routine maintenance

I spent a bit of the afternoon doing some routine maintenance on the W/NG, using the excellent on board tool kit: 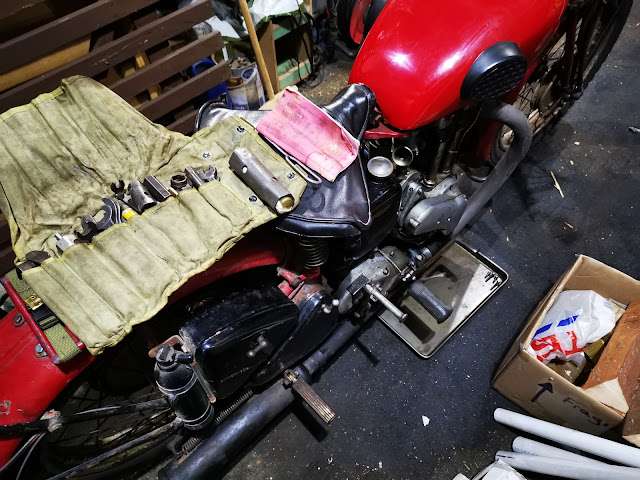 I was surprised to find the tappets had a bit of movement in them, though it was tea time before I could attend to them.

The clutch was a bit oily, but only in the cover, reflecting the fact that the chaincase was over-full. The pressure plate lifts level though, and the new plates have settled into the basket nicely. There is about an inch of oil in the chain case

All the chains tensions are good, including the magneto chain:

I put a cup full of oil, and many pumps of the grease gun in the gearbox. The lead light is very useful: 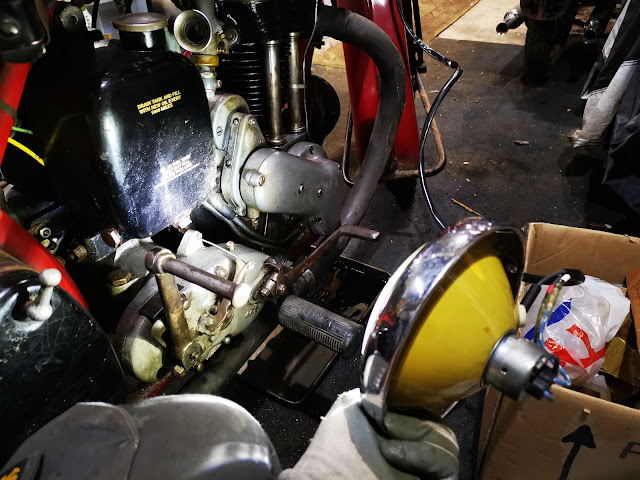 Oh, and I fixed the horn by squashing the adjuster lock nut slightly. It has an odd thread, 0.209" x 36 tpi which I found by luck on eBay - it's a bicycle tyre valve core thread!

Posted by CharlieCeng at 19:02 No comments:

Son Thomas and I had planned to do the VMCC Round Norfolk Run back in June this year, only to be discouraged by torrential rain - the run went ahead, but the ride down to the start point at Seething would have seen both of us soaked to the skin before we had even started. - So, we decided on a run to sunny Hunstanton instead!

We took the W/NG and the SQ4 on a 100 mile run around Norfolk - by the end of the day both bikes had done 145 miles from different starting points. 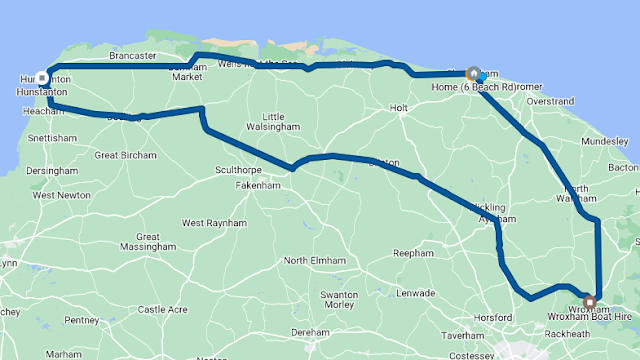 The SQ4 performed perfectly on it's new tyres, with scarcely a drop of oil lost and returned 50 mpg. The W/NG on the other hand was a bit tricky to hot start a few times (I've forgotten the technique), shed a lot of oil over the back tyre (over full chain case) and the horn fell off, which was easily fixed with some spare bolts from the panniers. We filled it up, to find it was doing about 100 mpg! 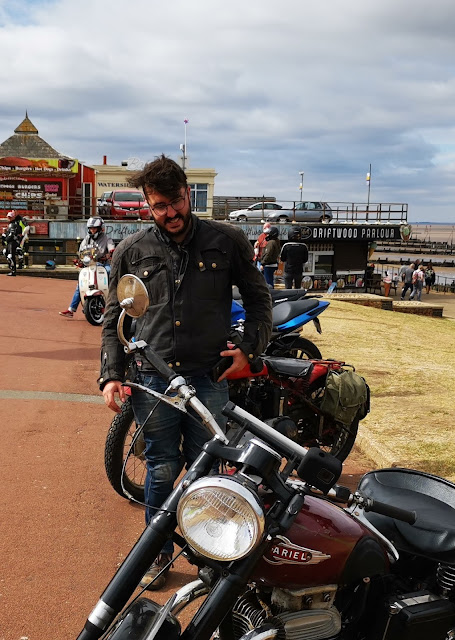 We had a great time, and we will do it again soon.

Posted by CharlieCeng at 20:30 No comments:

Email ThisBlogThis!Share to TwitterShare to FacebookShare to Pinterest
Labels: Norfolk

One of the things I have always admired about these old machines is the ease with which you can remove the wheels. OK, so I do have a QD rear wheel on the SQ4 and the W/NG is a little more difficult but at least I have two stands and can remove both wheels at the same time! Try doing that on a modern bike. 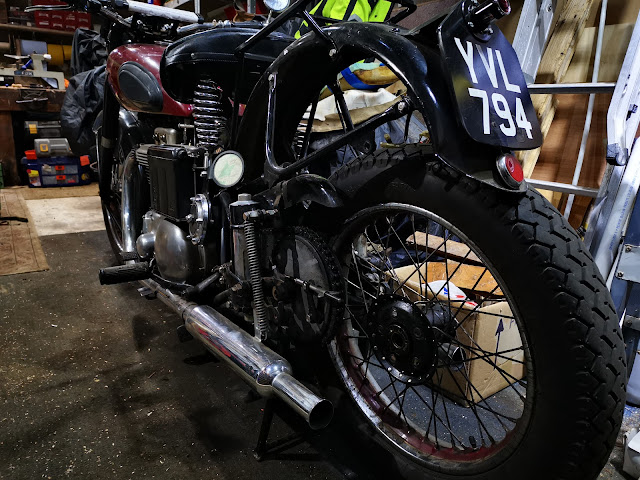 Something that is less impressive is the front brake cable adjuster, which doesn't fit any of the toolkit spanners - it appears to be 2 BA across the flats, but it is a pattern part so perhaps that is the reason. I have a 2 BA spanner in the toolkit especially for it. 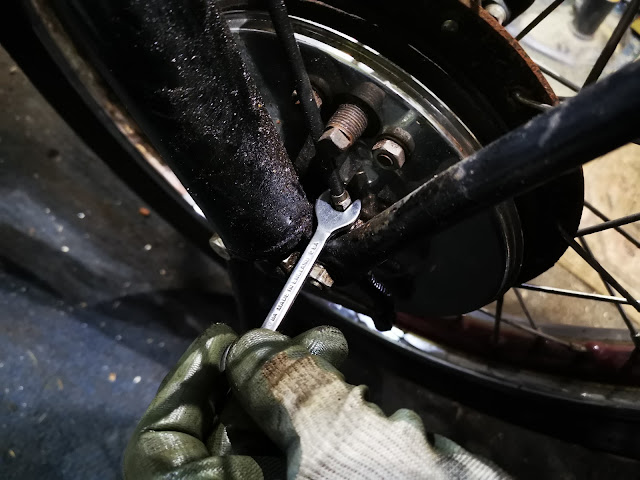 The front stand is very useful, though you have to lift most of the engine weight to use it. The trick is to make sure it is slack enough to swing down, and then tighten it up again. 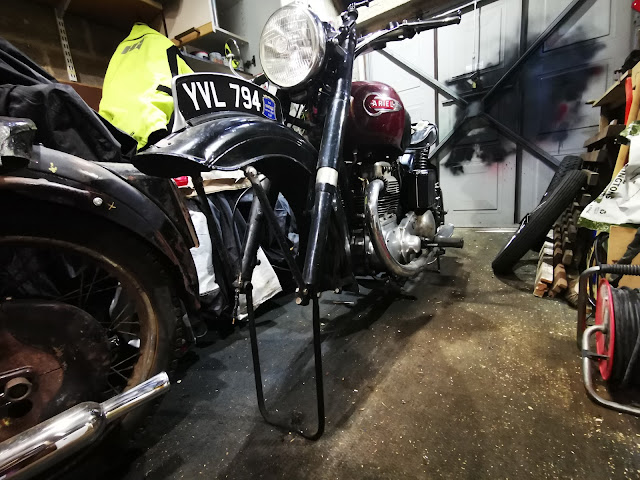 The reason for all this was that the Avon Speedmaster & SM MkII tyres are now 9 years old and it's time to replace them. I've bought a set of Avon Roadrider MkIIs, just like I put on the CX500 back in 2019. 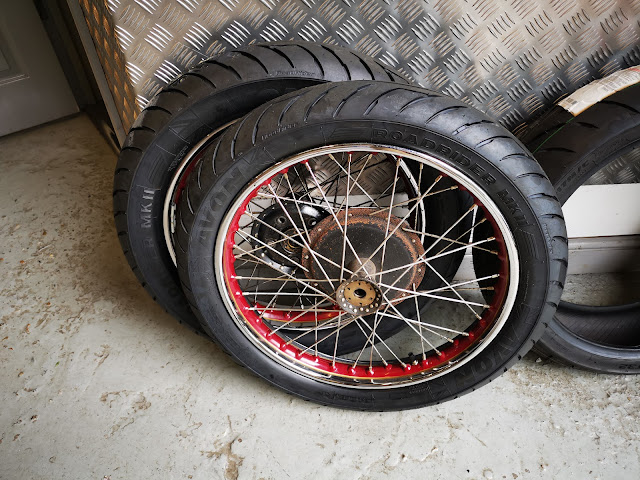 I might tackle that damaged paint on the brake drum before they go back on. But then again, I could just as easily do that when it was on the bike and get riding it again! 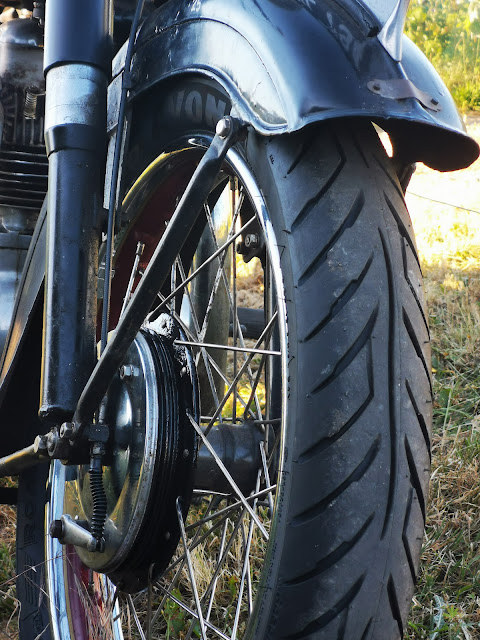 For the record, I am running these at 28 psi and 36 psi, at least for the moment.

This may be a seminal moment in the history of my SQ4. For years it's had an oil leak which I have always assumed to be poorly sealed pushrod tunnels at the head joint. However, having addressed a problem with a leak from the oil tank cap, something else which it has always done, I resolved to look at the drip from the rocker feed pipe.

The oil tank cap has always had a weep from the breather: 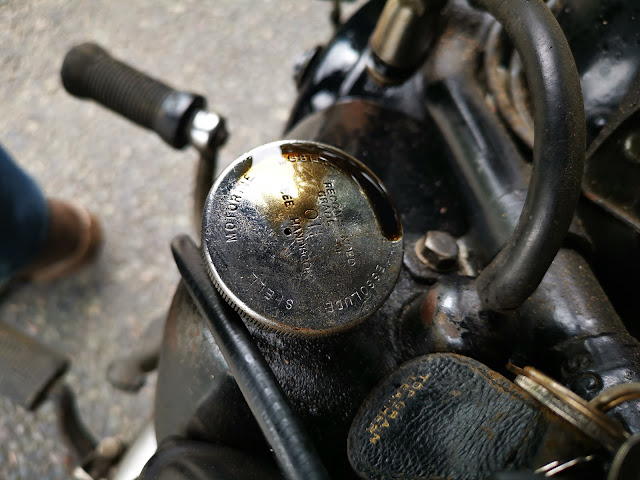 Which translates to a wet leg on a long, fast run: 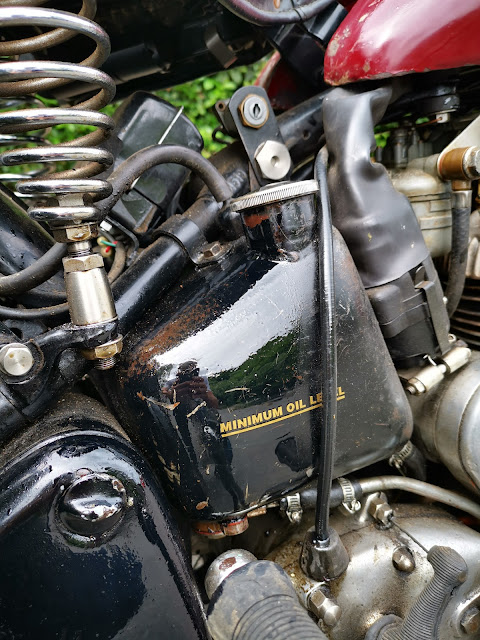 Looking at that first picture, I got to wondering why the cap has a vent hole when the tank has a piped breather that I have taken past the rear wheel. Surely the cap should be sealed? 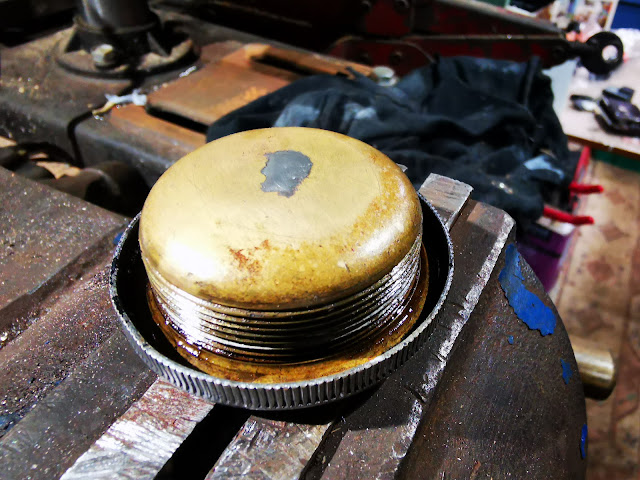 A blob of solder will sort it.

Onto the rocker feed. I ran the engine cold (75 psi on the gauge) and as the oil warmed up the leak appeared:

Now, my bad - I forgot to take a camera to the workshop when I fixed it. It turned out the tube was not pushed into the fitting at all - it was just held in place with a fillet of solder at one end, and had been like that for years - probably eight years. It's been leaking for most of that.

Posted by CharlieCeng at 20:13 No comments:

The FH kit came with a lot of original Ariel cables, most of which were pretty rusty but which still had their original adjusters and nipples. The cable layout changed with the advent of the swinging arm bikes, in that the mid-length and gearbox end adjusters moved up to the handlebars for the front brake and clutch. The thing is, most of the handlebars out there use the later 5/16" BSF adjusters, but Ariel used the earlier 1/4" adjusters to the end. Guess what? Levers with 1/4" adjusters are like hen's teeth!

So what to do? after looking at eBay for ages, and noting that Draganfly are out of stock I decided to modify what I had by sleeving the existing 5/16" thread. The issue is that putting a 1/4" thread inside a 5/16" thread leaves very little wall thickness, so the part would be weak. Here's how I set about it: 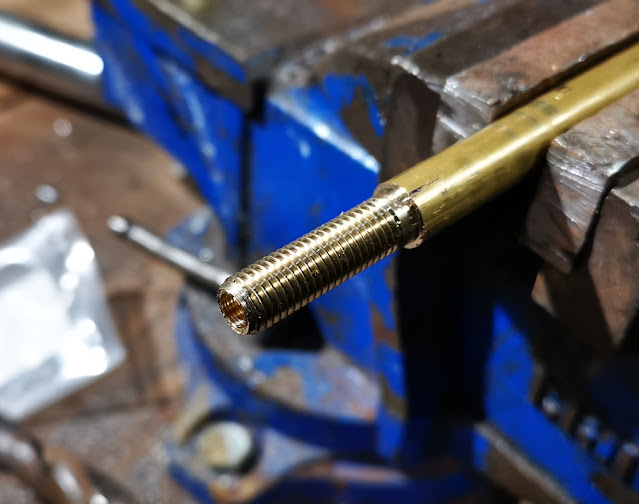 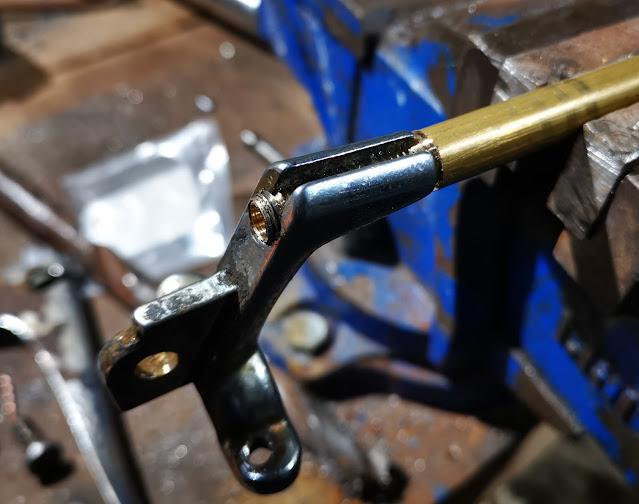 Next job it to file the ends flush, and tap the hole. Currently I don't have a tap long enough to go all the way through, but it's long enough for the adjuster. Cut the cable slot with a hack saw and a needle file: 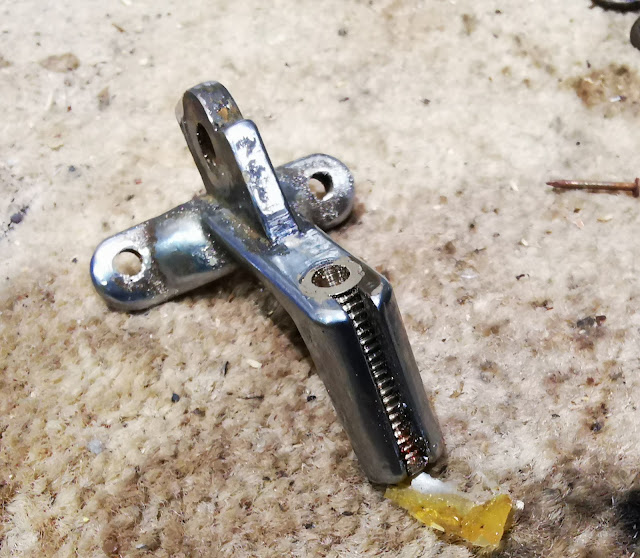 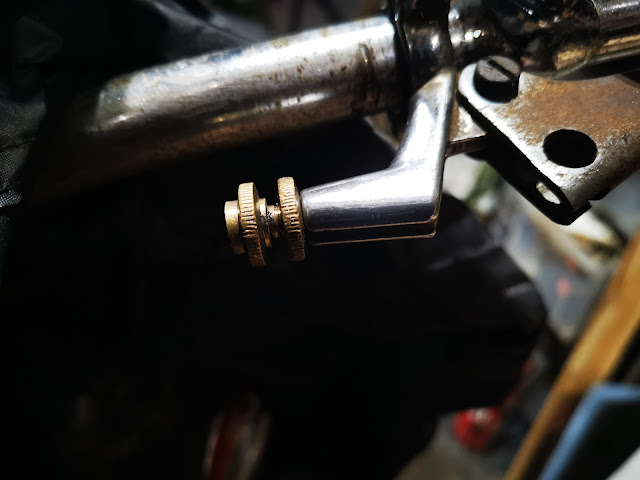 Posted by CharlieCeng at 09:43 No comments: