I'm sure this thing is going to follow me to my grave. Something as simple as a kickstart should be a five minute job shouldn't it? As you know, I've restored the splined shaft twice already which involved overlaying weld onto the shaft and making a dividing tool for the 31 tooth serrated shaft. It seemed to take ages.

So what now? the lever fitted didn't it? Well yes it did. But look: 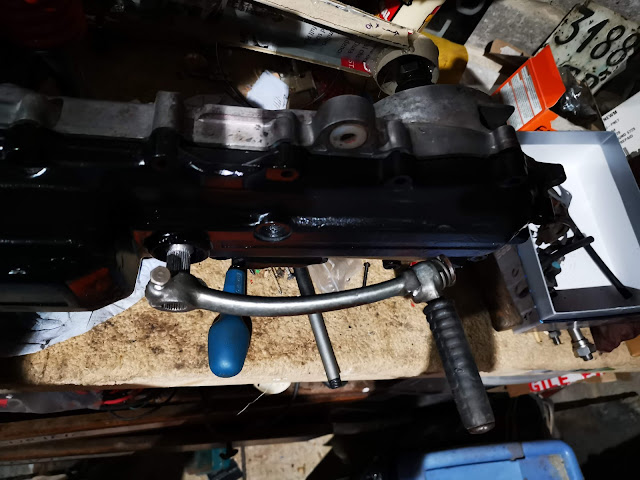 Well OK, it's a bit bent. but that's not what I mean. Look here: 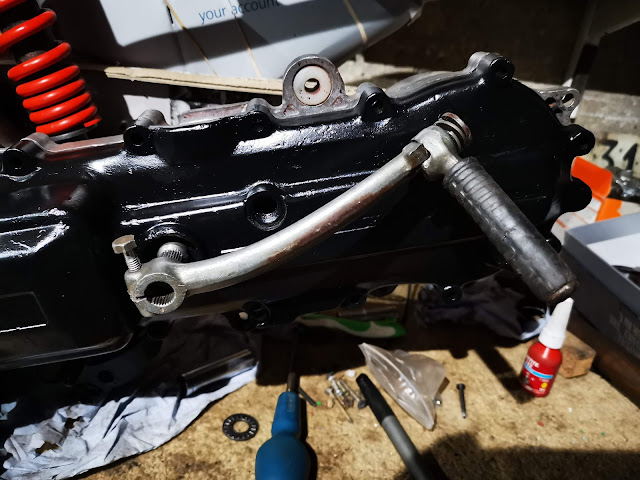 Try and kick it, and the foot pedal folds the wrong way - it's a right hand kick start lever.

Anyhow, not too difficult a job. First task is to centre punch and drill off that swage: 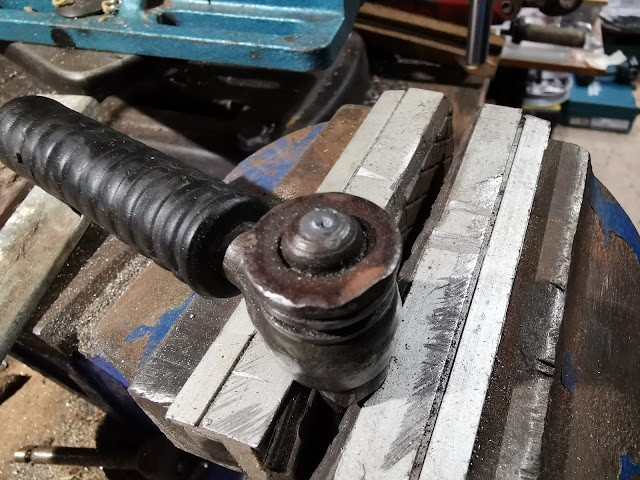 Now we can remove the foot pedal. We'll drill that pin for a screw later: 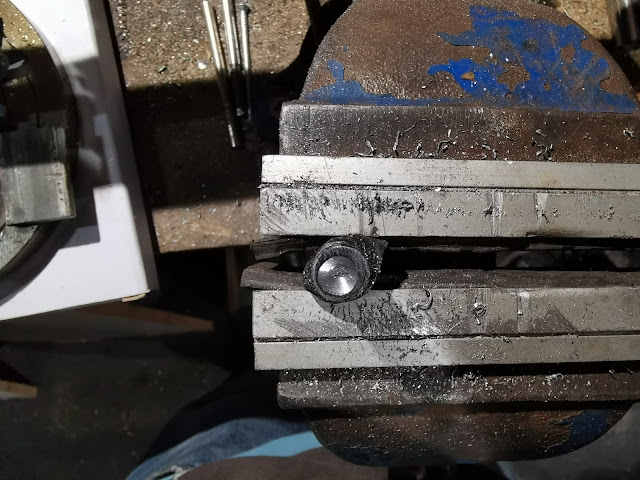 Here's the part of the lever that controls the way the pedal folds. We will need to fill that with weld using the TIG set and file up a mirror image: 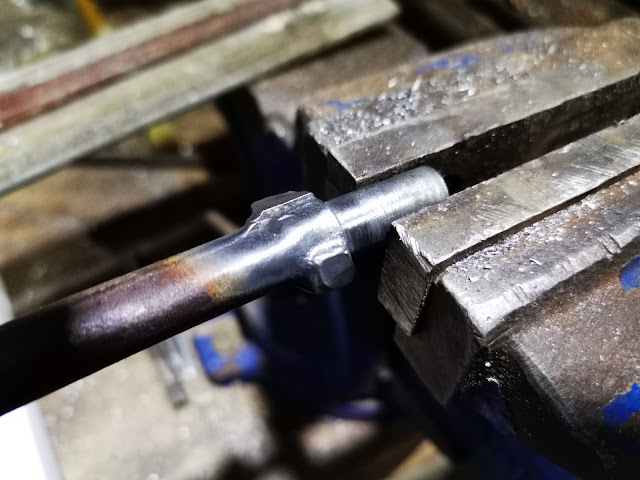 Filling stuff with weld has become a bit of a speciality recently. 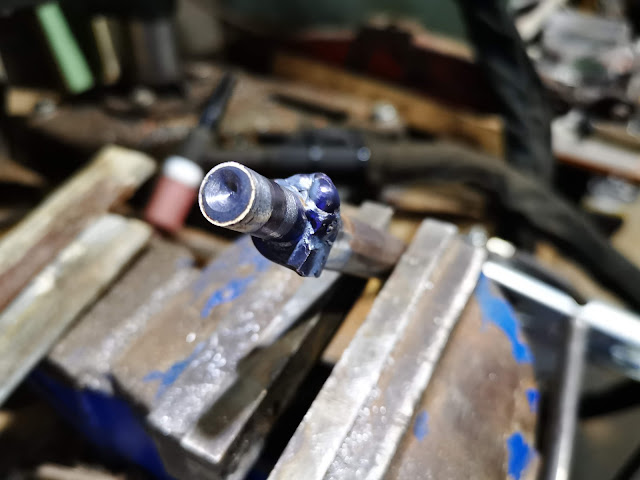 After a bit of filing, it now works as a left hand kickstart: 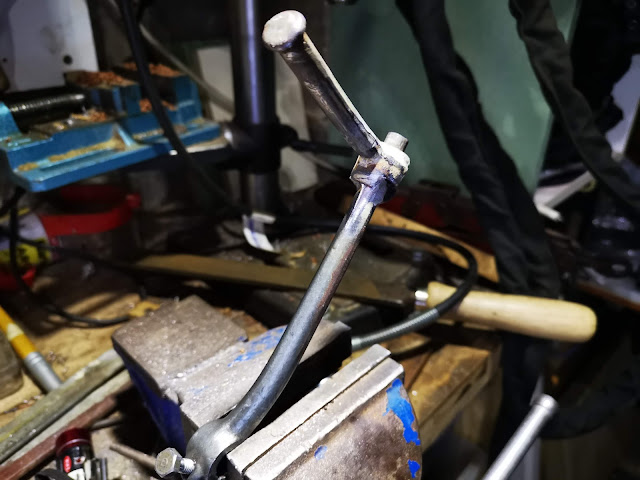 Here it is in both positions. The pedal is a bit bent, but we will fix that: 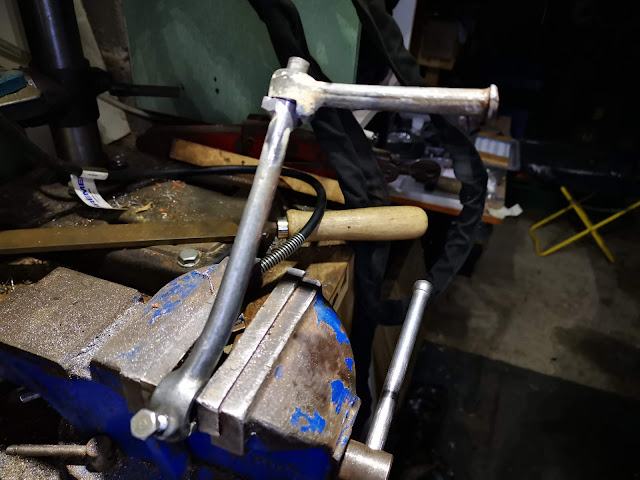 To retain the pedal, I have drilled and tapped for M6 in the end of the lever. The pedal is now retained with the original shakeproof and plain  washers by a large M6 set screw: 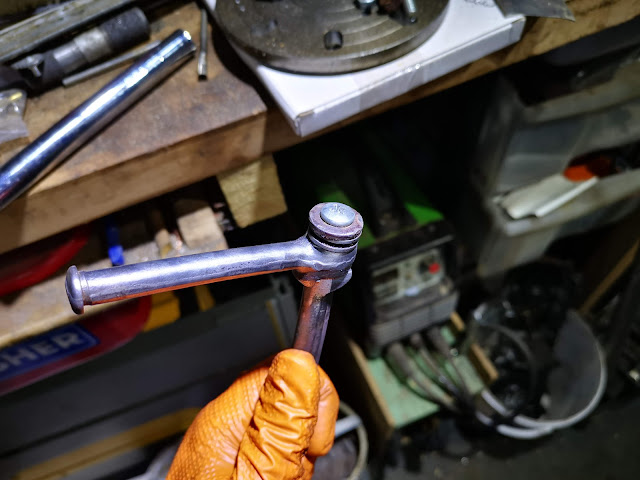 We'll paint it later, and put the rubber back on.
Posted by CharlieCeng at 13:49 No comments:

As you will have seen from my previous posts, I successfully built up the kickstart shaft from it's previous mangled stump and cut the splines on it only to find that I had misunderstood the spline pattern Honda had specified - in my defence, the kick start lever shows maybe 24 of the 31 splines the shaft needs; I had estimated 32. You can see the difficulty in the picture below: 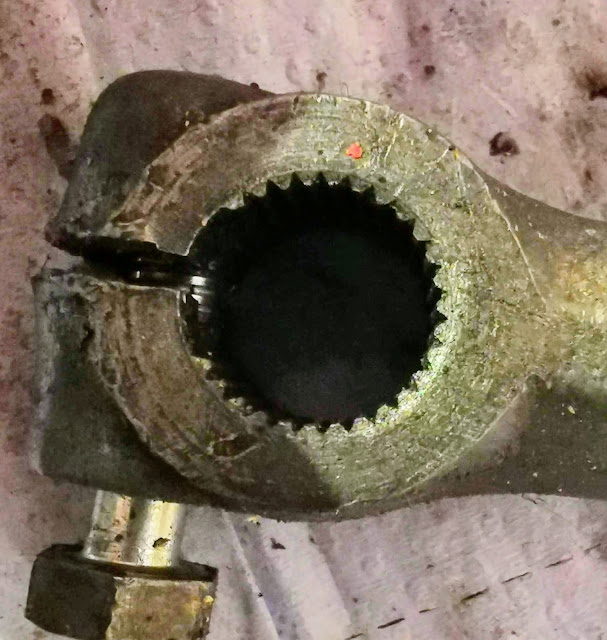 I had another Honda kickstart shaft knocking about from a PC50 which fitted the QR50 lever beautifully. When I found it, (after I had cut the new one, by the way), I discovered that it had 31 serrations, rather than the 32 I had assumed. After a lot of research, I found a drawing which matches the PC50 sample perfectly:

Building it up again was pretty straightforward. 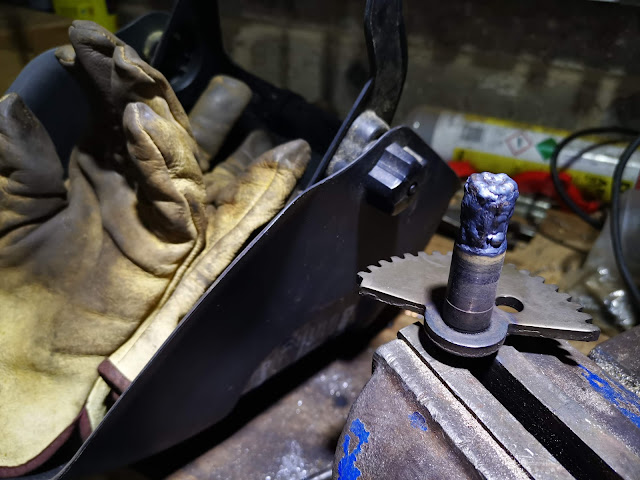 What was much more of a problem was the fact that I had nothing to divide the shaft into 31 serrations - no 31 tooth gear, no 62 tooth gear and certainly no 93 tooth gear...

So, I'd have to make one. I took a chunk of aluminium I had knocking about and put it in the rotary table. Thirty-one divisions equates to 11.86° per division, which is not too difficult to resolve on the rotary table. I set up a small centre drill near the edge of this material, and drilled 31 holes around the edge, incrementing the rotary table by 11.86° each time: 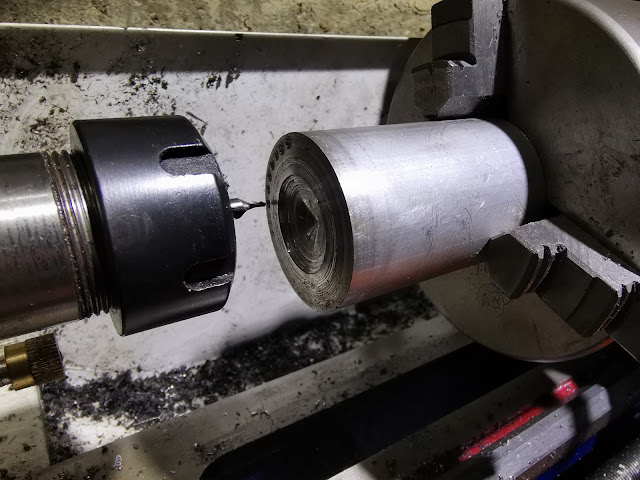 That done, the next job is to move the three jaw chuck from the rotary table to the lathe spindle, trim the outside diameter and prepare the 12 mm centre bore. 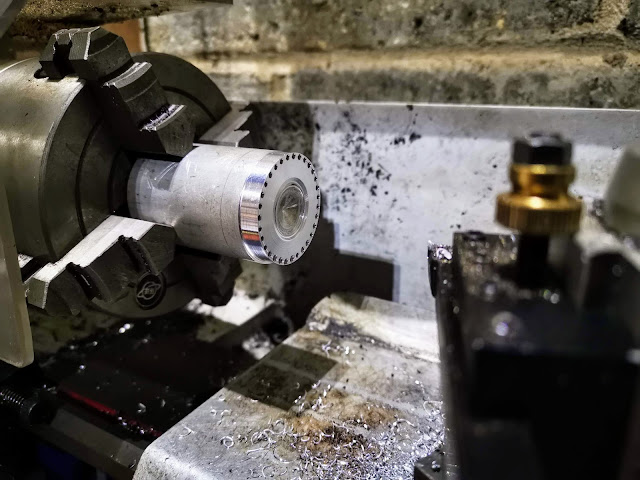 Then the next job is to trim the outside diameter to start turning those holes into grooves. Really, the holes are only for angular positioning - they are not deep enough to provide the finished grooves and will be adjusted with a file later. The next time I do this however, I will run a drill through each hole while the work is still in the rotary table - that will save a lot of filing: 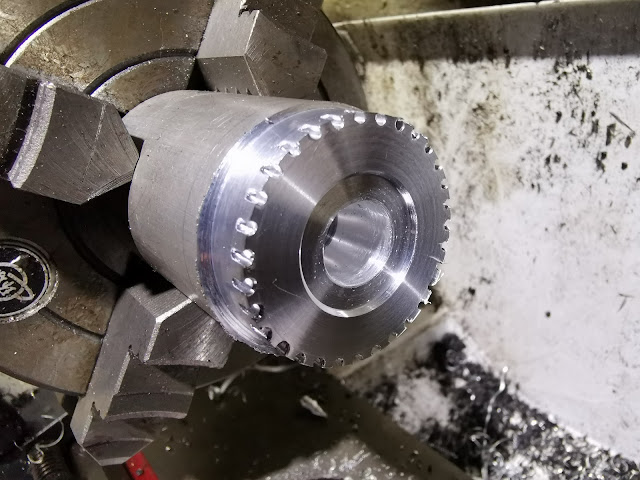 A little while later, we have the fledgling grooves exposed. The next job is to part off: 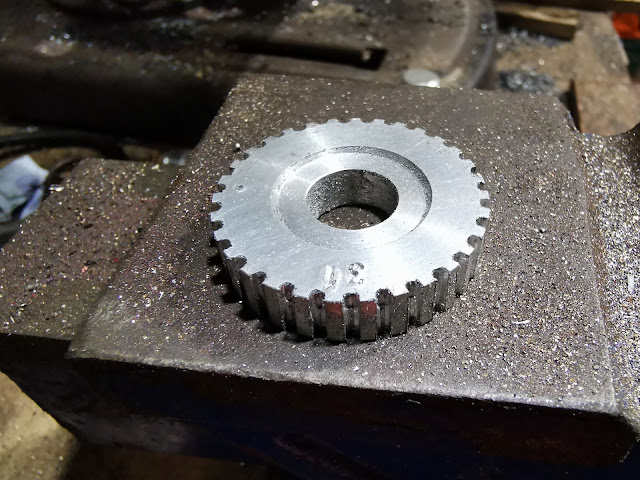 Of course it's not as easy as just parting off - I've extended the drilled holes using a hacksaw and needle files to form square-bottom slots the dividing pin will fit into neatly - we don't want it slipping out when we are trying to cut serrations.

I also dot-punched one of the slots so I could count them - I counted them several times to convince myself there was indeed 31. There was definitely 31, so I stamped the wheel to remind myself.

Next stop, prepare the shaft. This time, I managed to chip the carbide insert almost as soon as I laid it on the end of the shaft - carbide tips don't like intermittent loads, so I will use an HSS tool next time I try to machine an overlaid shaft. 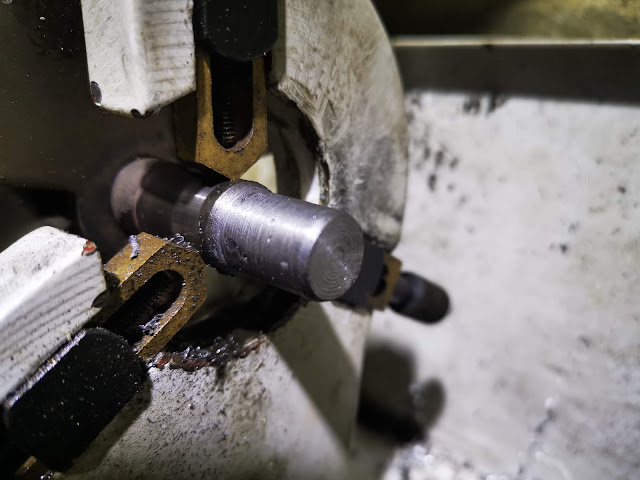 This time, I am going to cut the splines in 0.125 mm (5 thou) passes to make sure the alignment is correct before going to full depth - full depth is about 0.9 mm. That saves straining hands and loading the machine, so the cuts should be more accurate. Here goes: 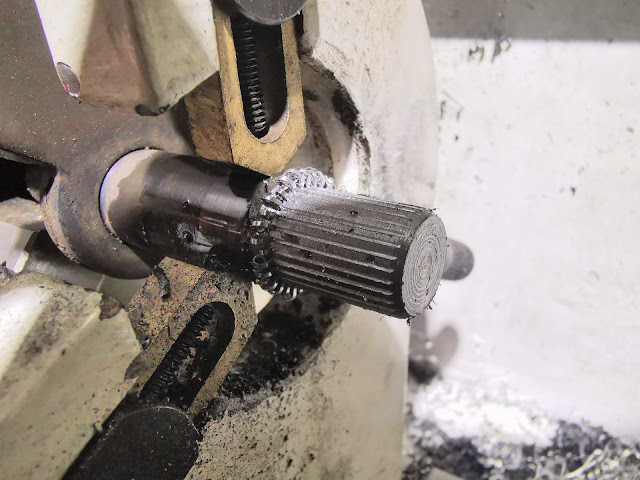 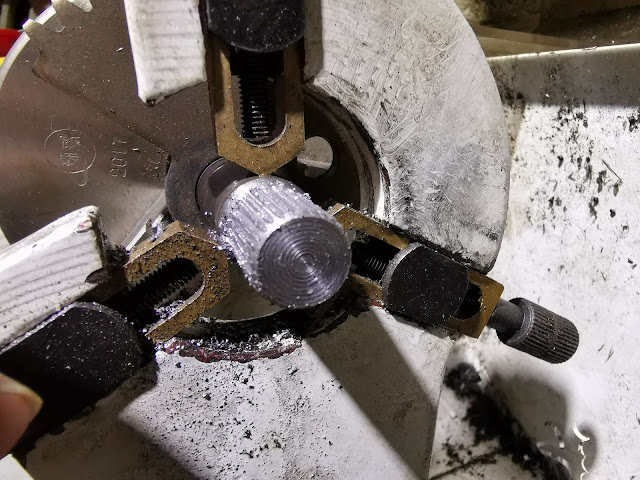 Almost finished now, but have a look at the crests of some of the splines. A couple of things happen when cutting these splines and I'm learning how to avoid the problems they cause:


Have a look at the spline at about 10 o'clock - there's a groove cut in the top of it: 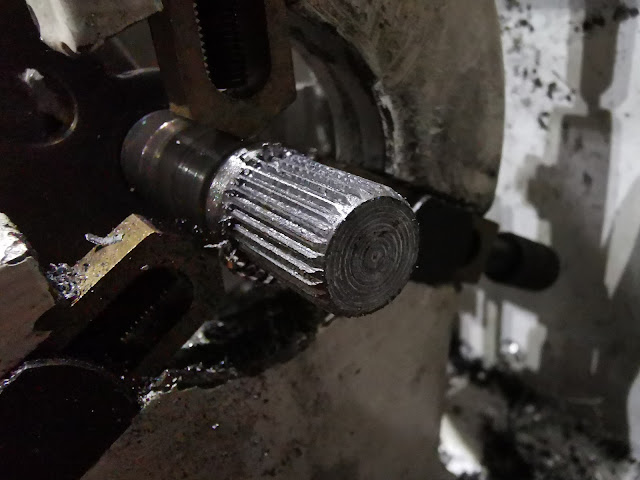 So that's it. Finally, it fits; whether it will withstand a hefty boot is a tomorrow problem. 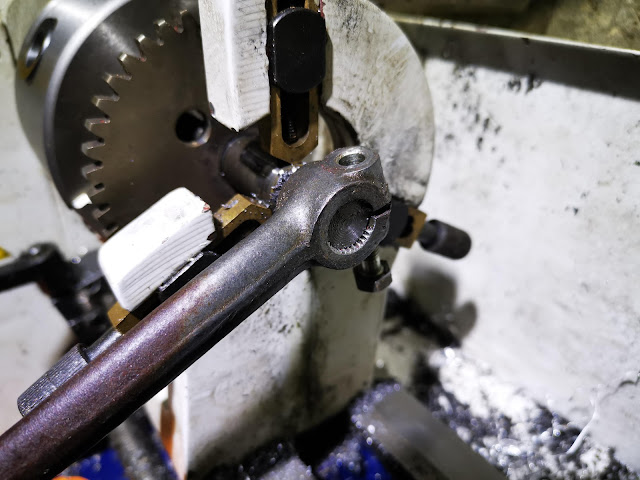 Posted by CharlieCeng at 21:44 No comments:

From new, the cross slide has shown itself capable of lifting at the gib strip, causing over-long turning or milling tools to judder. Adjusting the gib has been tricky - it's a balance between being too tight and having too much play. This is the cause: 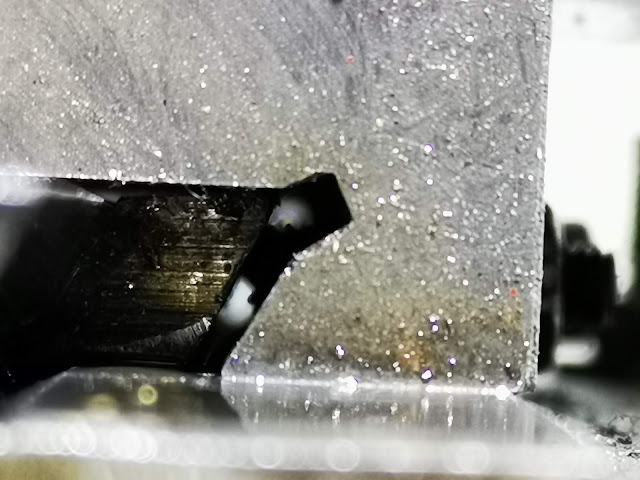 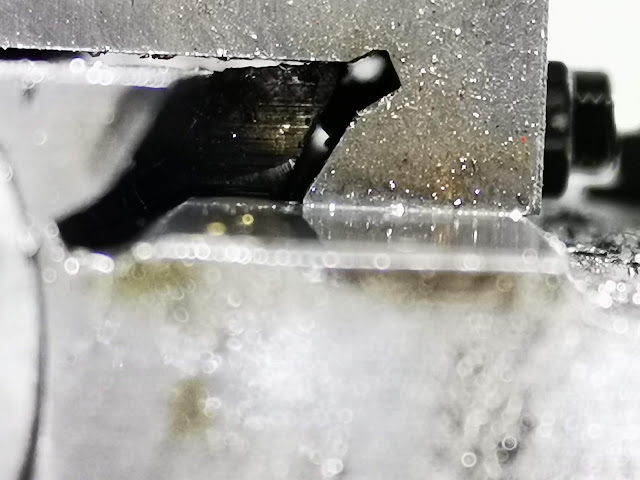 You can see that the gib is very poor - it is too wide (the gib should be tall and thin, not short and thick), but we can't do very much about that without making a new cross slide. Secondly, there is too much clearance above and beside it.

The main problem that this causes is apparent when milling, boring or general turning with a long overhanging tool. Obviously the cutting load going into a tool should be passed into the tool post and then into the slides, but if the tool is long, the forces will generate a turning moment which will lift the right hand side of the cross slide. If the the gib is too thick, or there is too much top and bottom clearance, the gib will rotate in it's slot allowing the cross slide to lift on the gib side.

We can do something about this, by making a new one which fits; a better solution is to make a new cross slide with a much narrower gib slot, but for now I will file up a new gib strip from brass. Brass is self lubricating and easy to file, so it will prove the principle. 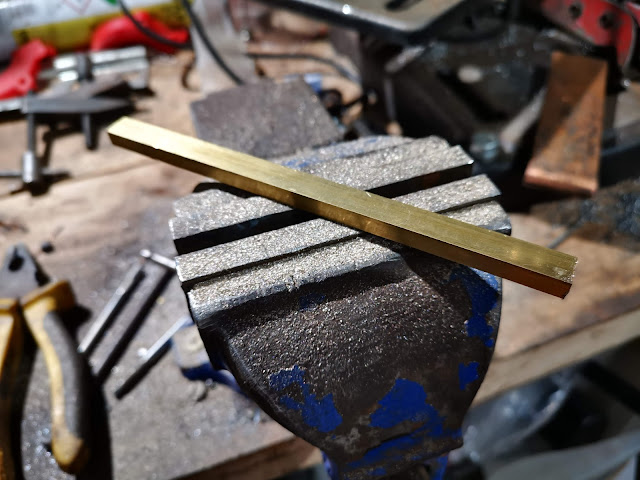 We can file it to shape quite easily, by coating it with Dykem and using the odd leg calipers to mark the line to file to on each side. 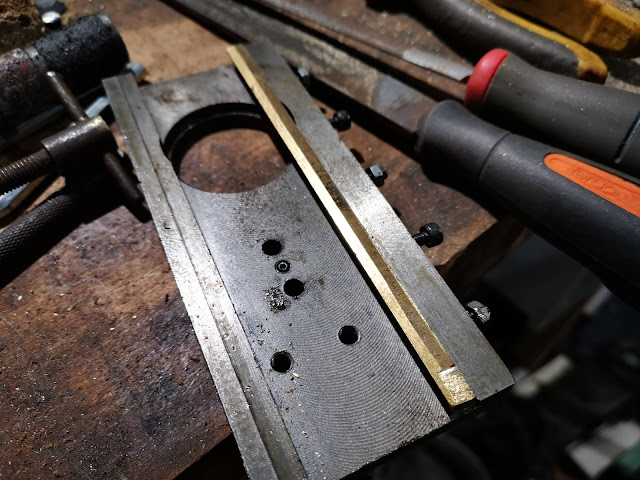 Once close, we can fit it in position working from one end until it slides in. 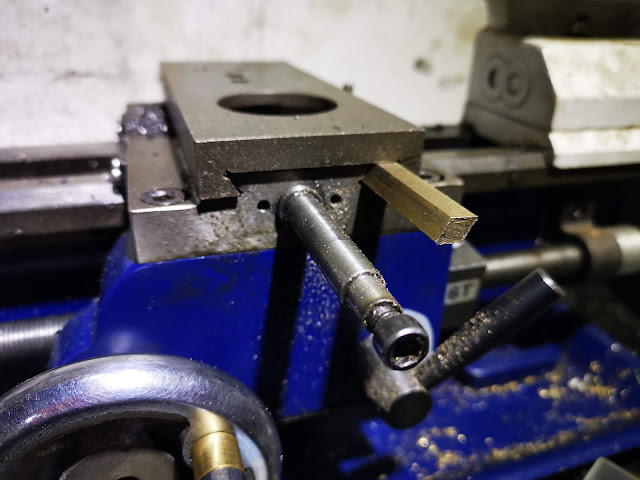 Next job is to spot the dimples for the screws through the existing holes. 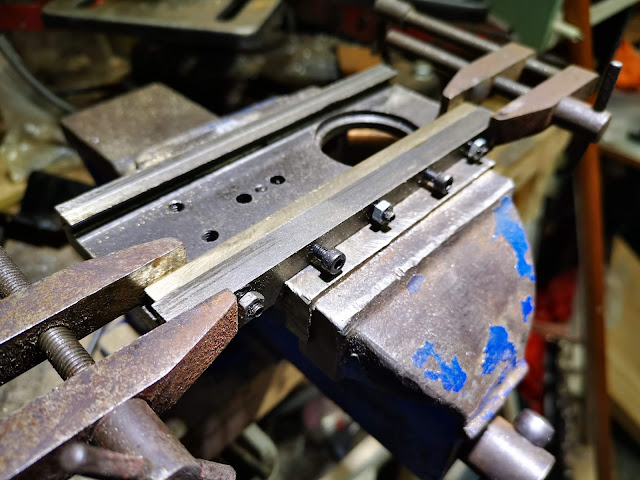 I've actually used dog-point grub screws this time, in deep 2.5 mm holes to improve support for the gib. This arrangement feels very smooth now, and there is very little clearance in the vertical or horizontal directions. 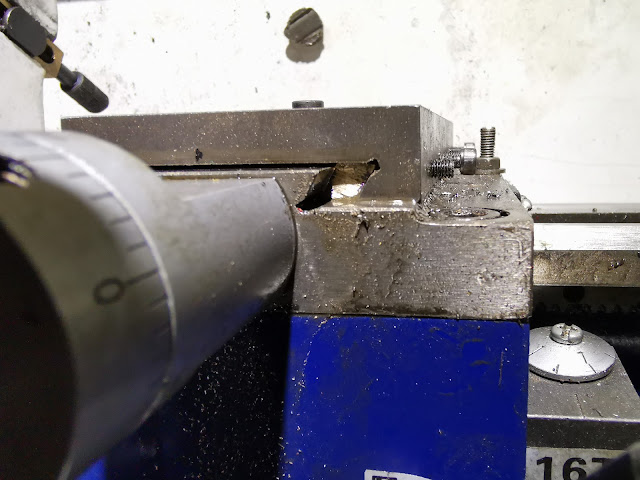 Next step is to test it, but I can tell it will be much better.
Posted by CharlieCeng at 10:33 No comments: