Shaking Down the SQ4

A beautiful day and a bunch of spare time - the opportunity I have been waiting for to sort out the remaining SQ4 jobs and shake it down ready for the summer.

First off, check the oil in the primary case, which is all OK; the primary chain is suitably tight as well. Next, add 200 cc of SAE 30 to the fork leg we repaired, then tyre pressures, fuel and oil levels and then finally get out on it to warm it up for the oil change. A trip along the coast road on a hot day reveals that the rear chain is still rubbing on the lower guard, and after six miles of caravans & Bank Holiday tootlers the rear brake starts to feel unusual - a kind of vibration through the pedal. I was approaching Salthouse at the time, and I decided that this was only a shakedown run and that I ought to turn back. On a hot day, I reasoned, the oil will be hot enough to change after 12-13 miles.

That was when it all started to go wrong. I managed to follow a bus and two caravans out of Salthouse, and by the time I had put another mile under the wheels the misfire had appeared. Power was really down and I had to drop to third on all the hills. Forgetting what the Four can be like in hot weather I was worrying about the ignition system, but managed to crack on home - I was overtaken by a military M20 at one point, as I could only manage 20 mph. At least my newly refurbished speedo was working perfectly, as was the charging system. Oil pressure was over 50 psi all through the trip - dropping to 25 psi on tickover which I was very pleased with, but remember it is still running Penrite Shelsley Heavy 40W-70.

Back home, I put the bike back in the workshop and drained the oil tank, the sump and removed the filter. Sitting by the oil tank, I could hear the fuel boiling in the float chamber, and my Infra Red thermometer revealed that the float chamber was at 80°C and the carburetter body, near the cylinder head flange was over 100°C - and remember, I had already spent 15 minutes draining the oil at this point.

So, I must fit that Phenolic spacer and maybe a carburetter heat shield. There is probably enough room for about 4-6 mm of phenolic - I have a 3 mm spacer at the minute. I may have to change the carburetter mounting studs but I think I will test out the spacer with half-nuts before I go to the bother of making new studs. 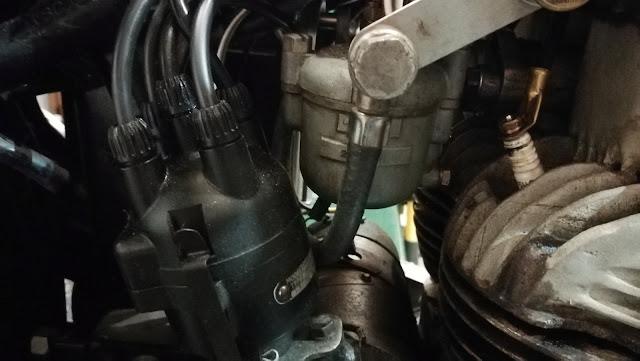 Looking briefly at the brakes, I probably have the rear nipped up too tight; the drum was smoking hot. The front had a bit more play when I got back and was working normally showing no signs of overheating. I will remove the rear wheel in a day or two.

So, after cleaning up the mess, I proceeded to remove the oil tank to exchange it for one with a good filler neck thread. I'll repair the old one in due course. All nice and tidy in there:

Fitting the new tank reminded me what a tight fit they are. My old tank had a relieved area under the frame tube, so I recreated this with a panel beater: 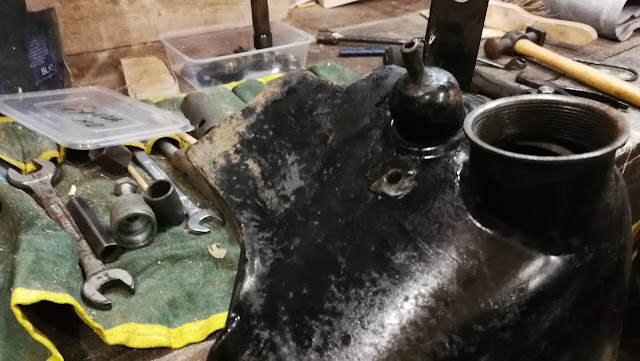 Next, having spent an hour winkling it into place, I remembered that the gearbox top nut has to be removed to get enough clearance to allow the bottom mount back into place. All fixed and back together now.

This year I will be mostly using... Penrite Shelsley Medium 25W/70: 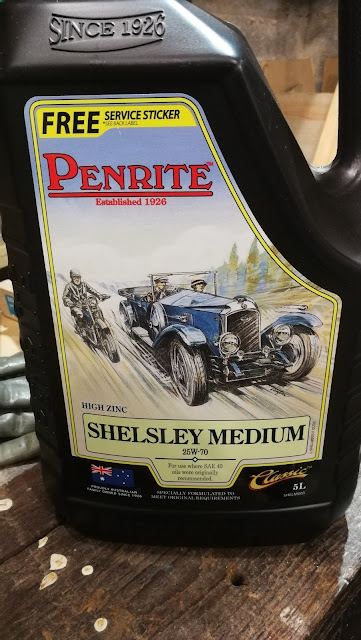