The summer is coming, the days are warming up and we need to get happy with the Square Four. Regular readers will know that it's overheated the carburetter and the chain is rubbing on the lower chain guard, but I have also noticed that the steering has been a little wayward - wayward in a 'I want to turn right' sort of way.

Having fitted the carburetter insulating gasket, it is time for another run out, this time to Aylsham M&S ostensibly to buy some rum. Initially we can see that the rear brake seems to be OK, while the front still needs some bedding in. The chain is still thrashing the chainguard.


After a 12 mile run down to Aylsham we stopped for rum & fuel. I was delighted to find that I could comfortably put my hand on the carburetter float bowl - no boiling fuel here today and no misfire on the whole run. The oil pressure had been at a steady 50 psig running and about 25 psig idling so I'm delighted with that, and there doesn't appear to be any leaks either.

However, getting home there is oil all over the oil tank and the toolbox, again. This is a problem that has been recurring over a few years and I have always just cleaned it off, pretending it was down to the duff thread in the old oil tank. This time however, you will recall that have replaced the oil tank for one with a good thread, so that excuse has gone.

A short investigation reveals no seal in the tank cap... Did I really never notice that in the 6 years I have had this bike? Easily fixed fortunately.

Looking at the wheel alignment again, after the bearings were replaced in the winter, seems to be a good approach to isolating the steering problem. A few minutes with a straight board reveals a wayward rear wheel and a few minutes with the bike's toolkit it is easily fixed. 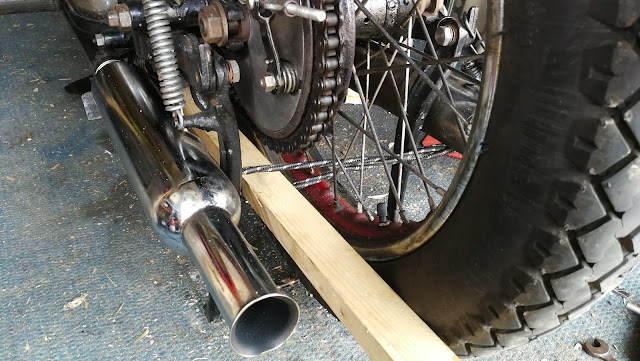 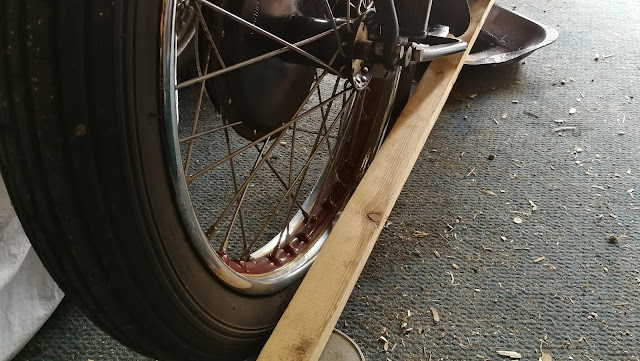 While I was under there, I had another look at the chain run and the lower chainguard. Yet another bit of judicious bending and we are done. Now we need another road test!
Posted by CharlieCeng at 14:35