Regular readers will know that I've had a few problems with misfires lately. I've cleaned the carburetter several times, reviewed and serviced the ignition system and fitted a tufnol spacer and a heat shield to reduce the carburetter temperature. This has worked to an extent, but I still have an occasional misfire. Cold, my 1951 SQ4 runs beautifully – it’s smooth and responsive. Hotter, it seems to stumble when opening up again after slowing for a roundabout or some other obstruction. This stumbling clears itself quite quickly, after which the bike will pull as it should. Occasionally you will get a cough or the feeling of holding back. 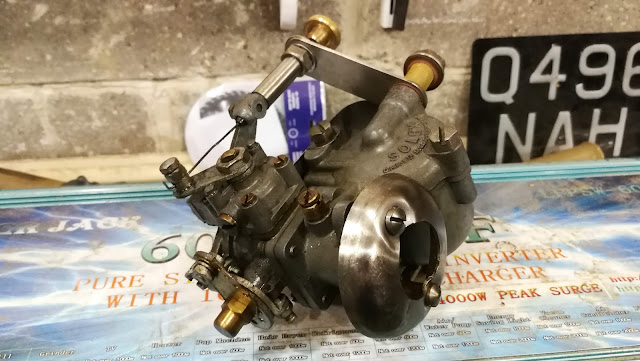 One of my theories is that the area of the float bowl casting forming the well around the emulsion tube is still exposed to engine heat, though I believe I can grip this with an ungloved hand after a run. The tufnol spacer and the heat shield have made a huge difference to carburetter temperature. 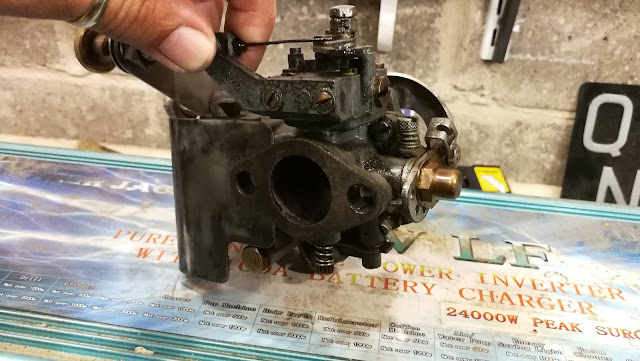 The first job was to straighten the tube. I put the straight section in the lathe, and brought a dead centre in the tailstock up to the air jet, to indicate the eccentricity. A bit of judicious bending, guided by the centre, had the emulsion tube straight again.

This is the emulsion tube, after my wiped solder repair. That crack was along most of it's length which would clearly upset the mixture. 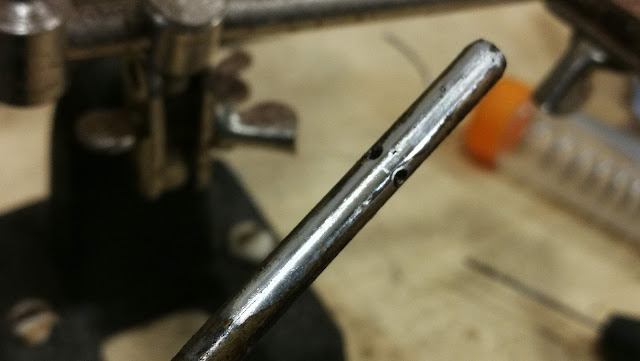 Now, David Jones has new emulsion tubes for £20 plus postage, so that would be the way to go. However, if this doesn't cure the misfire, and I think the misfire might be down to ambient temperature, I'll be glad I kept that £20 in my pocket.

We'll test it later this week. Ambient here is now anywhere between 10 and 18 C, so we may not be able to give it a proper test until next summer...
Posted by CharlieCeng at 22:45