Coming apart at the seams

Well, inspired by Mr. Frank Westworth and his tales of Thor, King of Hammers I have been caressing dear Amelias fine casings and she has finally agreed to show me her most intimate areas.

If you remember, I had released all the head fastenings and had summarily failed to separate the head from the barrel. At the suggestion of the ever helpful Brenton Roy, I released the barrel nuts which of course meant stripping down the timing chest, which all went very well.

So, one lunchtime I took hold of Amelia's head, and proceeded to lightly tap around the barrel base flange with my handly mallet, hide face of course. 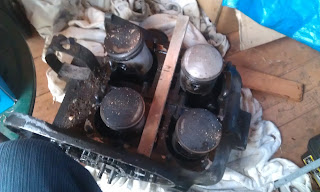 Slowly, the barrel came free and I was able to lift it, supporting the pistons on timber bearers as I went. What was revealed was quite happy, as far as I can see - nothing has been measured yet. However, someone has been in there:

As evidenced by the single shiny piston! I'm not sure what is going on there but at least nothing is broken and there is no rust. 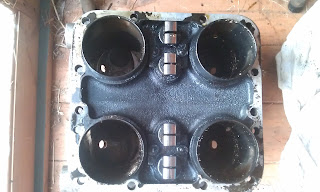 On the other side of the joint, again all seems well, but there is a lot of carbon about: 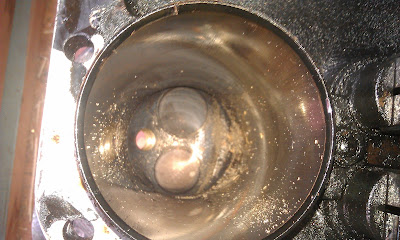 Here's each cyclinder, for the record: Number 1: 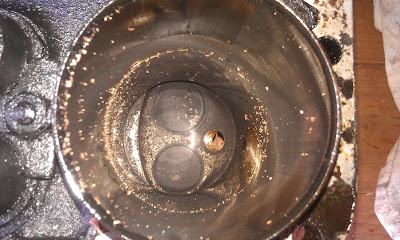 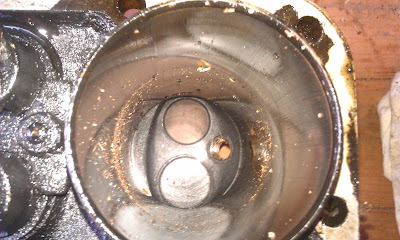 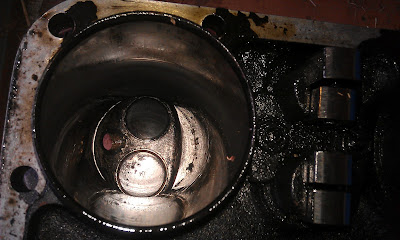 Next, we need to get the head off and measure up.

But first, now that we have the engine in manageable lumps, we will go and look at the gearbox again.
Posted by CharlieCeng at 18:44