An unexpected trip to Peterborough

With a trip to Russia impending, and only four months left on my passport there was no option but to go and spend the day fluffing around Peterborough, to get my passport replaced using the same-day service.

The 75 mile drive over from Sheringham was very pleasant in the morning sun and I was soon parked up in the centre of Peterborough, on the top floor of the Market Street car park, which commands a good view of the 12th century Cathedral. 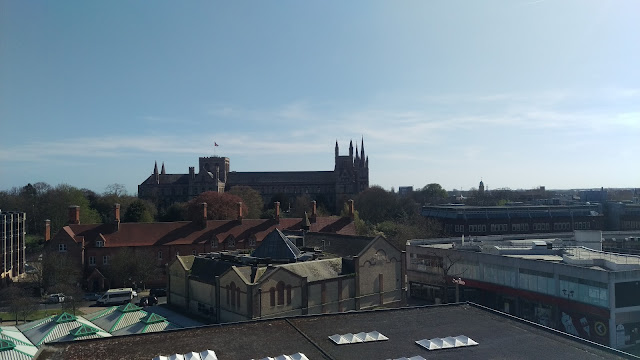 This is the west door, usually the most impressive facade of any cathedral. 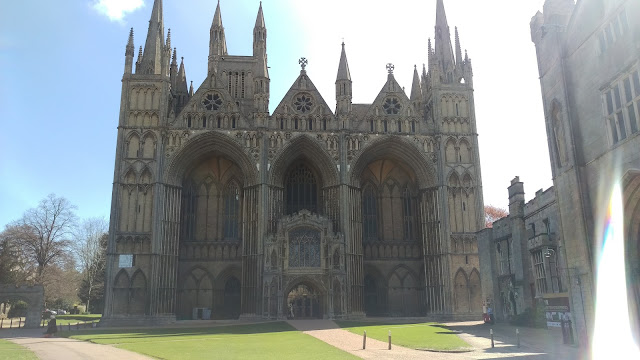 Having had my interview at the passport office, narrowly avoiding losing my favourite pen knife to the security guards I had four hours to kill before collecting it. I needed somewhere to sit down, do some emails and get some breakfast (although it was almost lunchtime), so I walked down to Railworld near the Peterborough East Coast Mainline station. Railworld is located on the site of the former LNWR Woodstone Locomotive Shed, closed in 1932, which is next to the Peterborough terminus of the Nene Valley Railway. They have a variety of international locomotives, other rolling stock, model railways, and a peaceful wildlife garden . 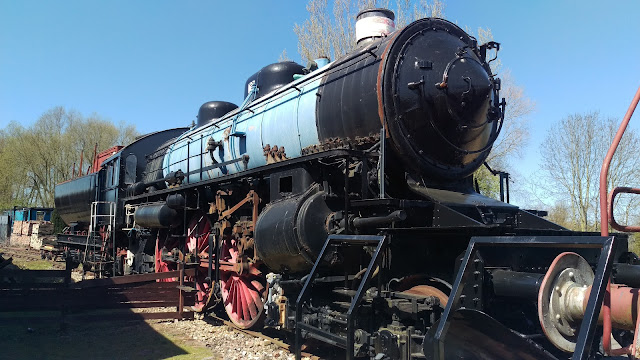 This is a Vauclain 4 cylinder compound Pacific locomotive which saw service with the Danish State Railway until the 1950's, though it is a Swedish locomotive originally. It's part of an ongoing restoration at RailWorld.

Various wagons are also stored at RailWorld in varying states of decay: 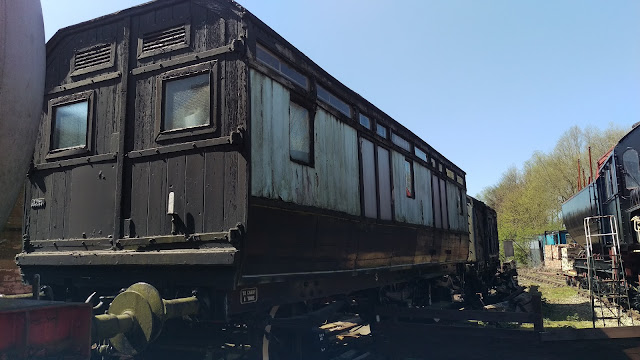 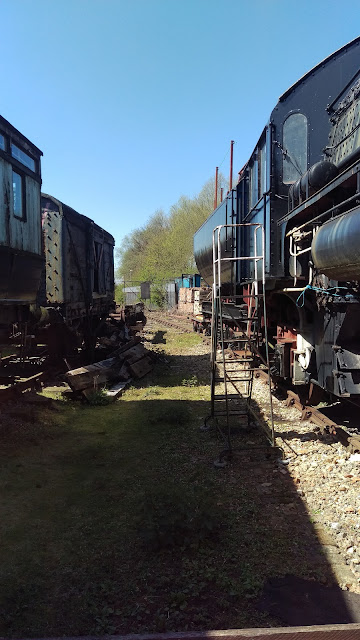 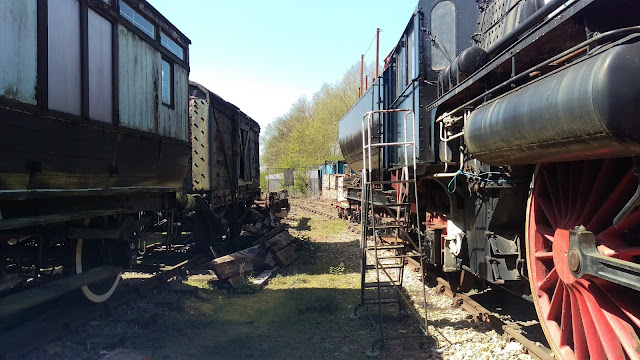 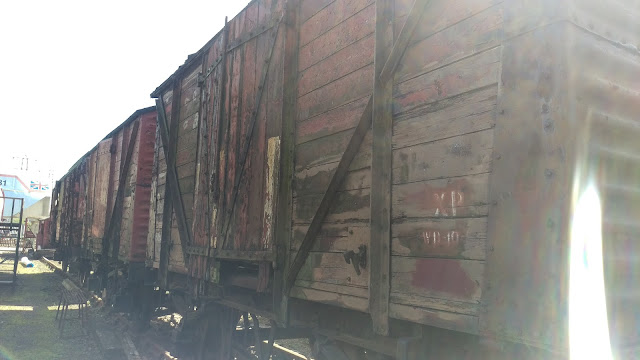 I had a walk around the Wildlife Haven at lunchtime. 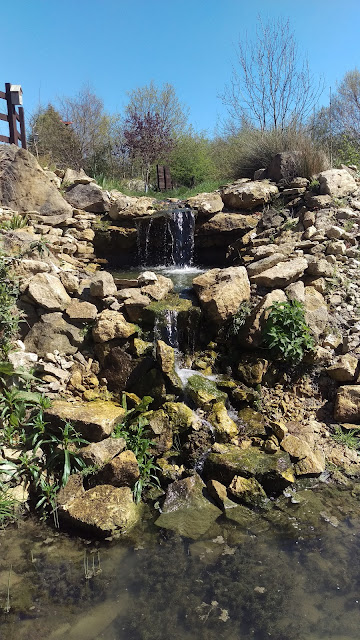 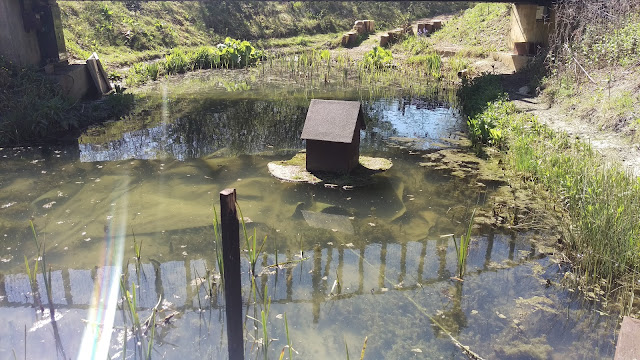 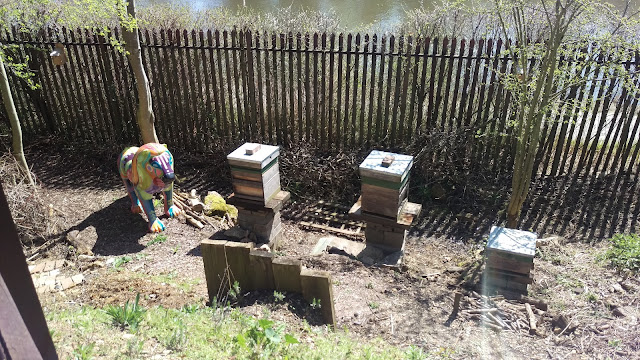 Bridges, originally part of an aqueduct from Abbots Ripton in Cambridgeshire. Each piece weighs 22 tonnes and carried the river over the railway until 1987. 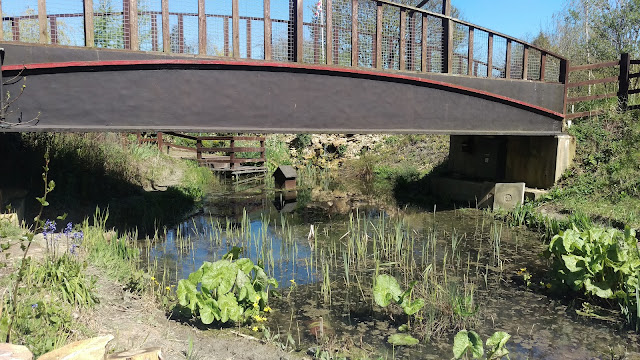 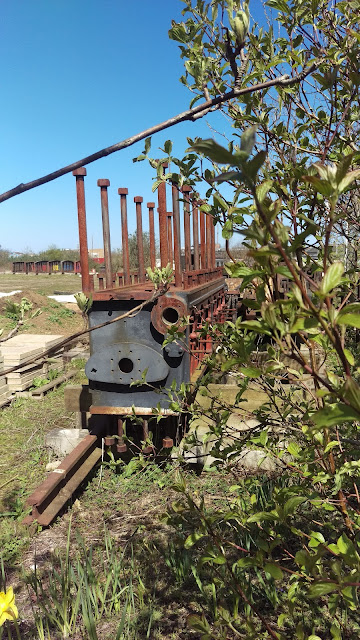 The NVR station at Peterborough is a modern incarnation, opened in 1986. The signal-box came from Welland Bridge in Spalding and there are some freight wagons to look at while you wait for your train. 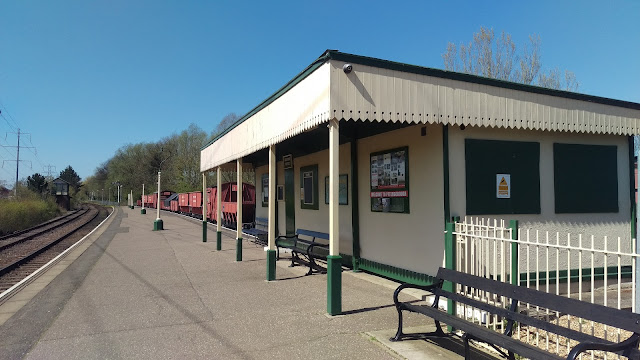 Here's my train, hauled by the LMS Black 5 45337, which I'm sure I have seen on the NNR. I was very lucky, since I happened to be in Peterborough on the first day of operations for 2016. 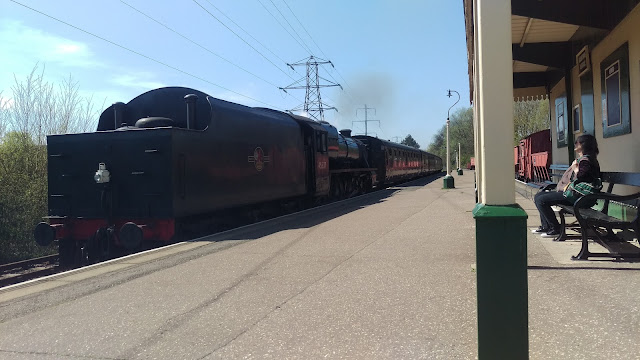 LMS Class 5 4-6-0s, known as Black 5s, were designed by LMS Locomotive Superintendant Sir William Stanier and introduced in 1934; they were built, with some modifications from George Ivatt, until 1951. There were five LMS Black 5 locomotives sent to Barry Scrapyard in the 1960s; 45337 was purchased in 1984 and was restored to working order at the East Lancashire Railway in Bury.

As the name suggests, the railway follows the River Nene away from Peterborough in a westerly direction passing through peaceful countryside and a number of small stations. 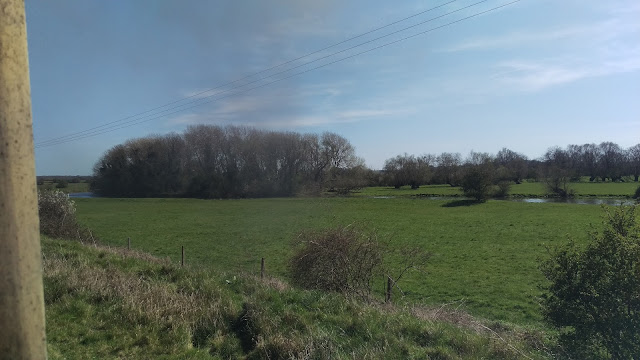 Arriving at Wansford, the NVR's main station the first loco we see is Wissington, on test after arriving from the NNR. Wissington is owned by the Midland & Great Northern Joint Railway Society and has been a regular site in our neck of the woods. It's currently on loan to the NVR to take part in their Small Engines Gala. 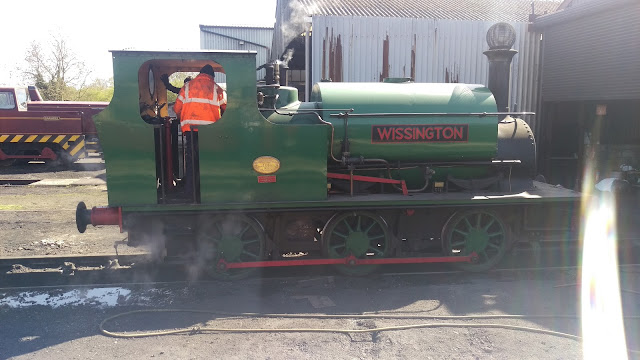 The Black 5 at Wansford, posing for a few snaps before departing for run around at Yarwell Junction: 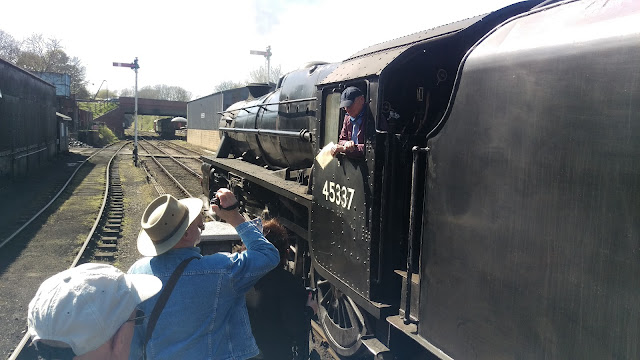 A view of the yard and station at Wansford, looking east. 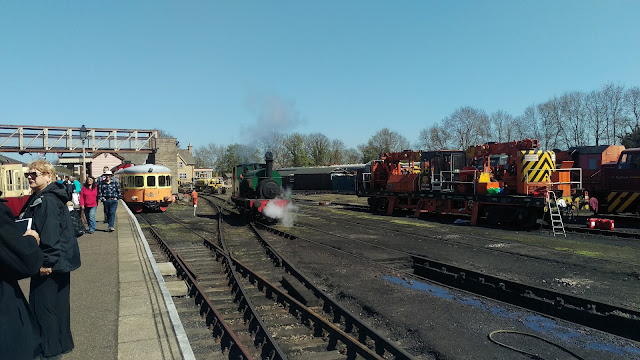 Here's something I've never seen in the flesh - a turntable! The turntable bridge was recovered from Ipswich and was built by Ransomes & Rapier of Ipswich in 1933. 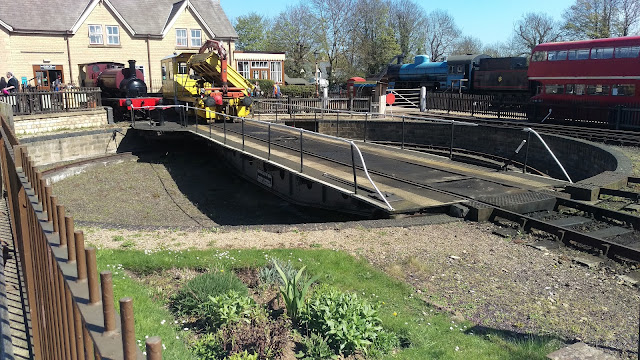 This is the Wansford signal box, grade 2 listed and sitting over the level crossing where the old Great North Road crosses the line. It's a large 60 lever box built in 1907 and it replaced three earlier signal-boxes. The signalman also controls the level crossing gates. 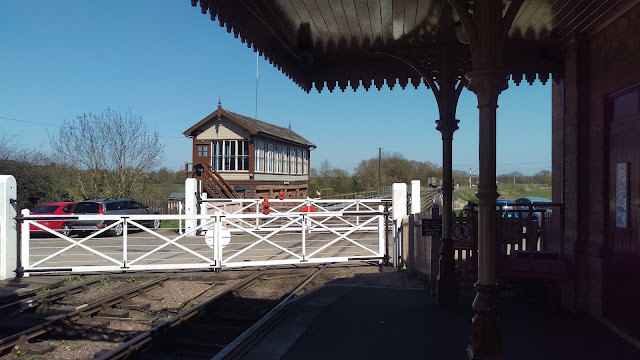 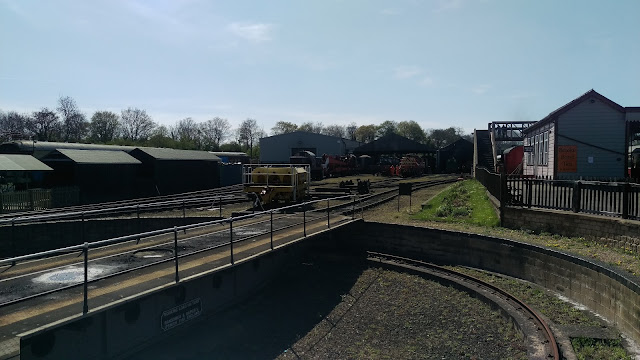 This was my first time in a heritage railway tunnel! 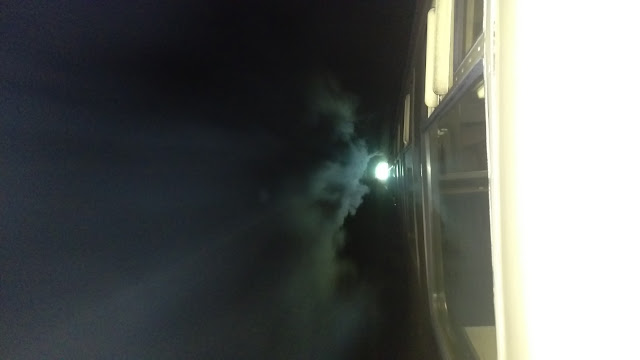 The 617 yards long. Wansford tunnel is straight and level and has no ventilation shafts. At the western end of the tunnel, the NVR have a halt at Yarwell Junction where the locomotive runs around for the return trip to Peterborough.

Here's the Black 5 back at Peterborough about to run around for the return trip to Wansford. Arriving on a weekday afternoon, there weren't a huge number of visitors about and I was able to chat to most of the train crew. A very friendly bunch who really helped me enjoy my day out. Thanks guys! 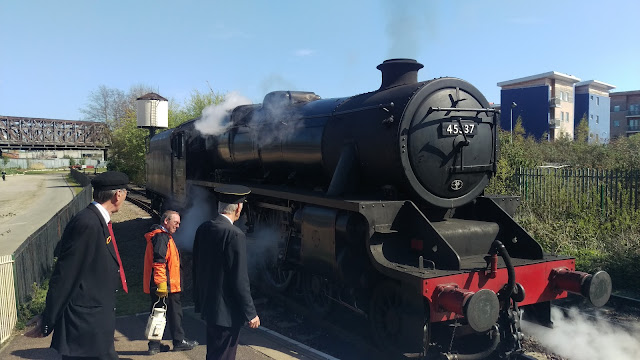 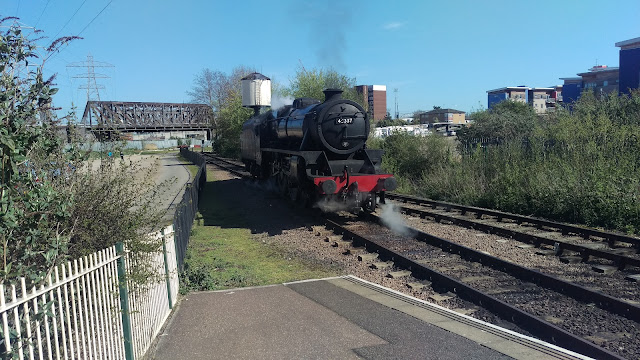 Just to counter those who suggest that I might be slightly obsessed by ancient technology, here's an example of new technology lurking in a street in Peterborough: 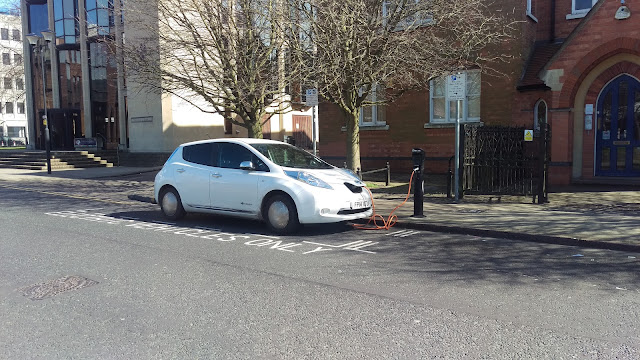