Schoolboy MOT's the MZ and makes lots of Errors

Starting the MZ to go for it's MOT proved difficult - I have not mastered this yet, though the lack of time on the road hasn't enabled me to tune the carburetter properly, so that may be the problem. We had the MOT done at H Curtis & Sons at Overstrand, so we could have a nice little blat along the coast in the sunshine, through Cromer and out the other side. 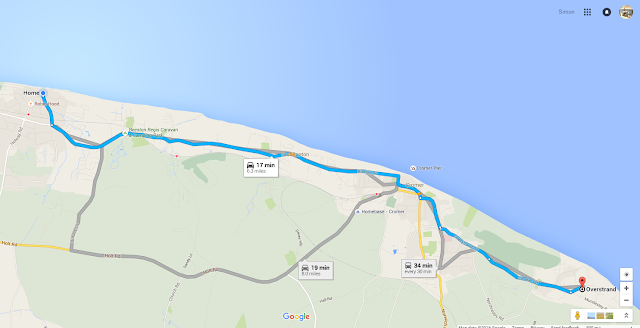 I was a bit nervous, since this is the first time I have been out & about on any MZ in about 30 years. Initial reaction is that it's very steady, and the road holding feels very safe. There was a hint of a wheel alignment problem, and the rear brake is a long way down; the front brake is also quite worn & grabby but overall the bike seems to have a good deal of get up and go and we arrived safe & sound at the garage in Overstrand.

Throughout the trip, the front brake had got progressively less noisy, though the clutch is dragging and I think that there is a bit of a top end rattle. As I was a bit early, I took the opportunity to lean out the idle mixture a bit now that the engine was warm. 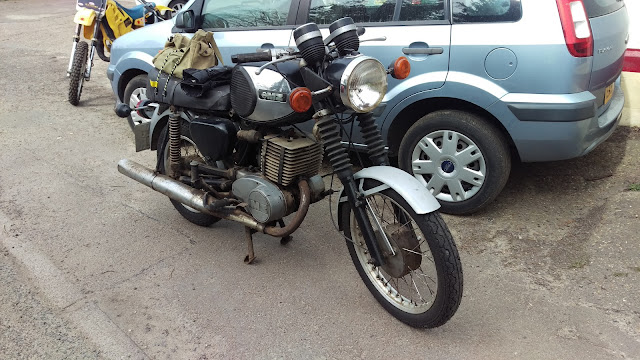 Leaving my helmet & gloves at the garage, I went for a mooch around Overstrand which has some pretty buildings, including the Methodist church designed by Edwardian architect Sir Edwin Lutyens: 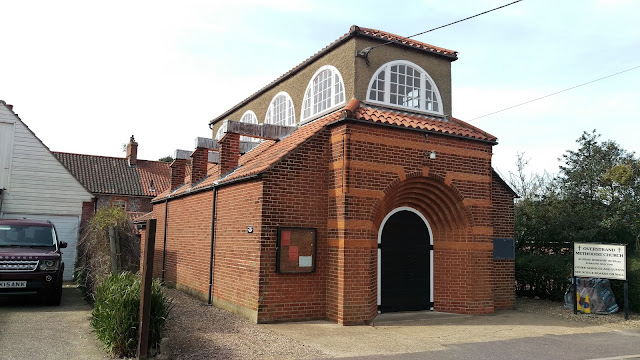 Nearer the beach, we have the ubiqutous Fordson Major draped in a tarpaulin, and rusting away. These are used all along the coast in for hauling boats about: 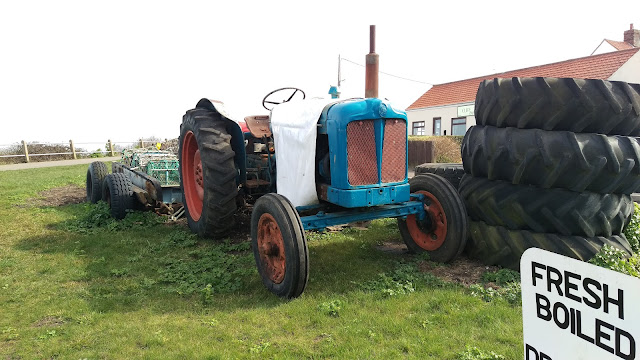 Down to the beach, with Trimingham in the background: 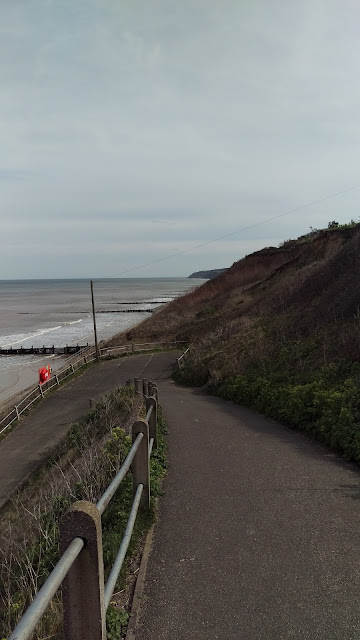 This pretty bit of Overstrand is called the Londs: 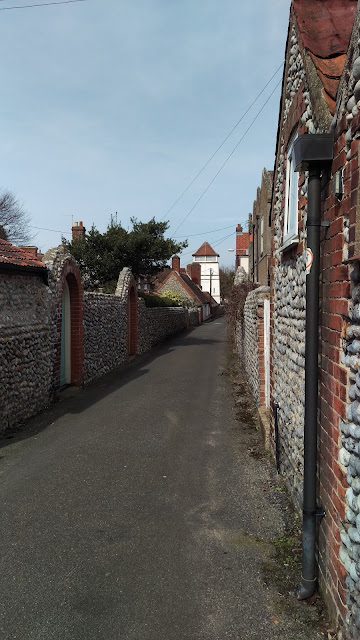 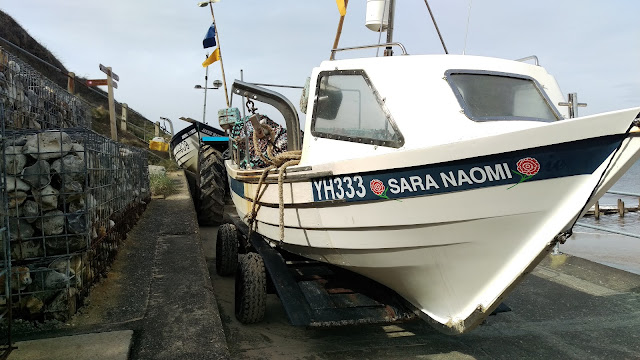 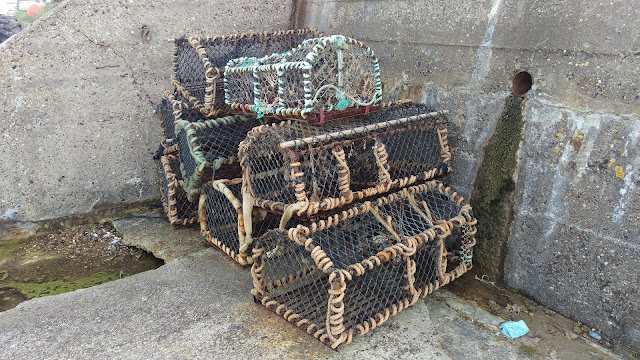 So, after an hour I wandered back to the garage to be greeted by an MOT certificate! It seems to have started for the MOT tester, which surprised me almost as much as the fact that he put it on the sidestand - it  does look a bit precarious... 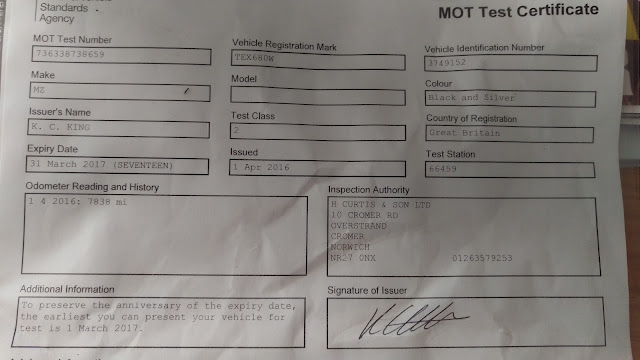 The MOT test had also found that the rear wheel alignment was a bit wayward, so I will have to fix that as he made it an advisory notice; and that was it. It started for me once I'd had a chat and got all my stuff back on.

Unfortunately, the pleasure did not last long, and some 100 yards spluttering towards Cromer saw it stop, and refuse to go on. It was fairly obvious that it was not going to move again so it was helmet & gloves off and out with the tools. It was so dead that I was fairly sure it was ignition so I started there, only to realize that I had packed the wrong size plug spanner and I had to pull off the side cover to get at the points to be able to see any evidence of sparks. A screwdriver in the plug cap revealed a relatively weak spark so I set about cleaning points, coil & condenser connections, plug cap etc. to the sound of some encouragement from people passing by on the pavement.

Bikers are a friendly lot by and large, especially if you are in trouble. A chap I now know to be Jimmy Lee Shreeve stopped to see what was up and he was kind enough to stay to the end. An interesting chap, his website is here. Besides keeping me company, he had a plug wrench under his saddle, which was a godsend. Since the last time I broke down (on the Cyclemaster, about two weeks ago) was a whiskered plug (and I didn't have a plug wrench then either - you'd think I'd learn), I was glad to check the spark plug with Jimmy's help - and it was fine. A van driver also stopped and got his tools out to see if he could help, offering to fetch anything I needed from the garage down the road.

Next the petrol tap came apart, followed by the carburetter - nothing amiss anywhere. I was just giving it a last kick before giving up and calling the RAC, when it fired, and spat back a couple of times, probably due to the serious clean out it had had when testing for sparks with the plug out. Memories of the first time I flooded the Bantam in Tesco's car park came to mind as did the serious tweak I had given the mixture screw when I had stopped earlier in the afternoon. Winding this out well beyond the normal 1 1/2 turn position had the bike running reasonably consistently, apart from the violent banging in the exhaust. This was so bad that it had become very obvious - the exhaust nut had shaken itself out. I wound it in again as best I could (no C spanner), which quietened things down considerably - so much so that I realised the top-end rattle must have been a leak starting. 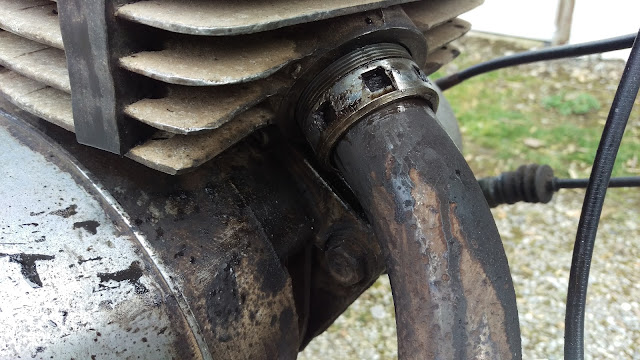 So with a farewell from Jimmy I charged off to Cromer, exhaust banging away and sounding great. Tickover was not too brilliant, but I didn't let it die and got safely back to the workshop in 20 minutes or so. Once back, breaking out the C spanner had the engine running much more quietly, but I think we still have a leak. Judging by the smoke, it's probably an engine oil seal, but I am loathe to fix that when I have the Huntmaster waiting.

So I'll use it while I sort out a few little jobs on the SQ4 prior to the summer season, and then get it onto eBay. More of that later.

So all in all, a good trip out. Best part? Meeting new folks and seeing just how kind people can be!