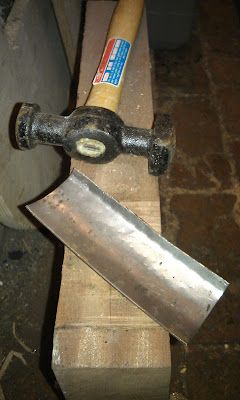 So remember planishing pieces of copper at school? making bowls & beakers surrounded by 30 other 14 year olds? well it continues in my cellar workshop, courtesy of some sheet from a local fabricator, some cheap panel beating hammers and a lump of sapele with a scoop out of it.


The plan was to make some repair panels to bridge and reinforce the cracks, then to butt weld the original material so that when the original metal, since it was so thin inevitably burn through there would be some meat behind it. 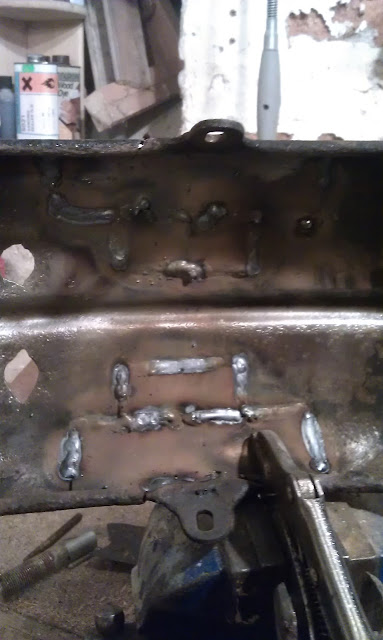 Here is the underside of the rear mudguard, with the first two patches in place. I'm quite pleased with the quality of the welds though this work is a graphic illustration of why welders are coded for the position of the weld - the horizontal welds with the torch held above the weld are of much better quality than the vertical ones! That mole grip is doing double duty, holding the patch in place and providing the earth connection. 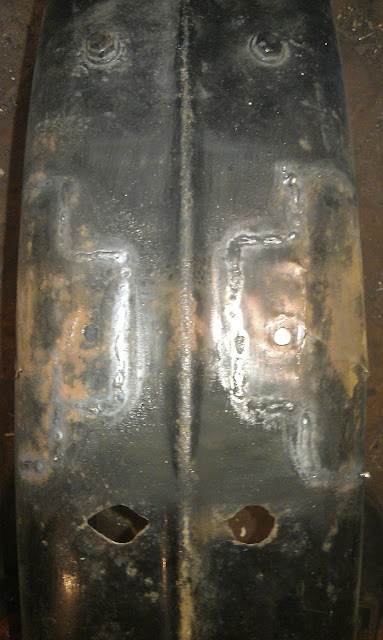 Here is the topside of the same patches.

Good penetration all the way around and no holes! Below this you can see two large holes which had been used to mount the spring pillion. The two bolt heads above are, I guess, the other two pillion seat holes. I'll be leaving these until I am sure that I don't need them! 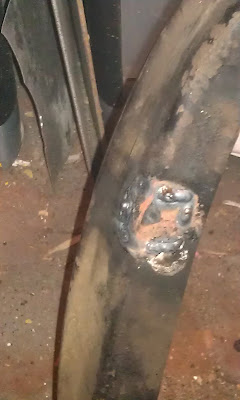 On to the outside of the mudguard. This is a small hole which appears to have been caused by the chain guard chafing on the mudguard. Looks ugly - I didn't really have the orientation right when I tried to weld this up. Nothing the flap wheel can't sort out. 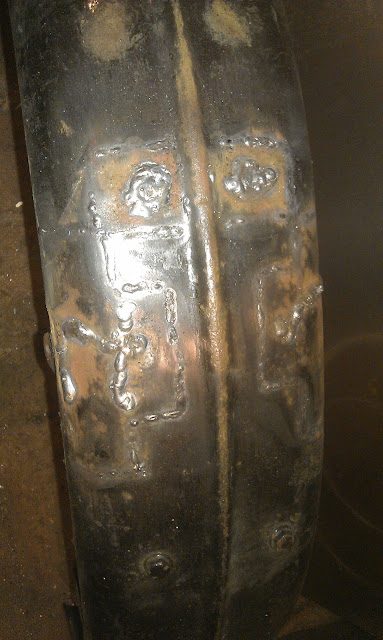 And here is the outside of the area around the upper L-stay mount, where the pillion seat mounts were. Those two holes are uppermost in the picture, below that are the cracks which have now been welded up. The mudguard is now very stiff, compared to the wet rag it was before. 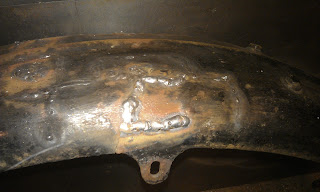 Here is another shot of the same zone, in its more natural orientation. 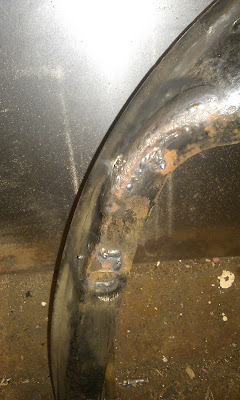 Lastly, this is the area around where the chainguard fits. There was a long crack on a fold here, where residual stresses in the material would have led to increased levels of corrosion. This was backed up with a narrow strip on the inside with continuous peripheral fillet welds, with a continuous seam weld on the outside.

So that is it. the next step is to fit it to the bike, and for that I need a delivery from Mike Peters at www.polished-stainless.com, and the special studs for the L stays from Drags.
Posted by CharlieCeng at 15:40