On to brighter things?

After the doom & gloom of the gearbox story, I fitted a few more parts and had a general clear up of the summer house - we don't want domestic bliss to be troubled by Ariel parts in the way of deck chair deployment!

The oil tank went in first: 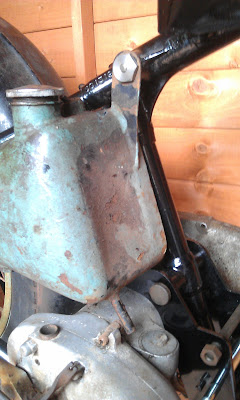 Fitting was relatively straightforward; the ding in the filler neck was not as bad as I had remembered but the dent in the front was a worry.

This was laid to rest by the ever helpful Brenton Roy, AOMCC member & correspondent from Australia who confirmed this is as Ariel intended and is there to clear the distributor.


Not so the other picture!

A Dutch correspondent, and another fellow AOMCC member, suggest that the dent in the oil tank behind the battery was probably due to an exploding battery...

We may leave that one alone, since you can't see it when the battery is in place.

However, also visible in the picture is the very nice stud arrangement from Acme Stainless, holding the oil tank in the frame lug under the saddle. 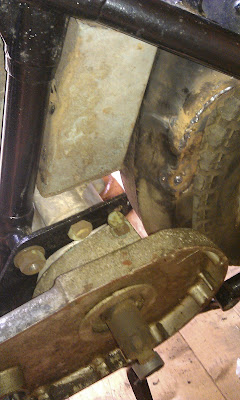 Here's the oil tank again from the battery side, with the inside primary case in place albeit loosely.

Apparently the spare hole in the engine plate is for the clutch cable. 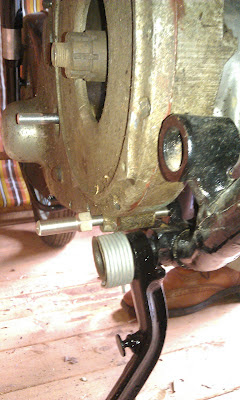 Here's a view of the primary case from behind, to try and ascertain what happens here. That shiny bit (there is only one shiny bit) is the brake lever stop, another Acme Stainless component. You can see it behind the primary case where there should apparently be a spacer. Thanks again to various AOMCC folks.


And here she is as she is today, looking a bit more like a motorcycle! 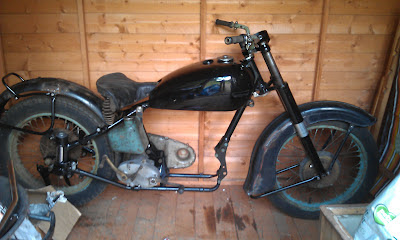