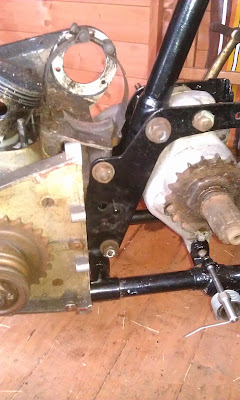 So, a day came when there was no decorating or other householdy tasks, when the weather was not too wet, and there were no pressing domestic engagements. Amelia was mobile on her own (hitherto flat) tyres and we were able to face up to the beast that calls itself chain alignment.

My plan was to fully assemble the engine plates, gearbox and primary drive and determine once and for all whether I was going to have to modify, or replace the G107 gearbox.

The first job was to finally bolt up the engine plates with the correct studs - luckily I had enough of these and all of the special ones from the boxes of bits, plus the lower gearbox bolt from Acme Stainless. This was very straightforward, only needing a small amount of help from a jack to get the bottom front engine stud in and tie the bottom frame tubes to the down tube. All nuts on, and I was pleased to see the top & bottom gearbox lugs aligning perfectly within the plates.

Small problem - the bottom gearbox bold threads in the frame lug are caked in rust - must buy a 1/2" CEI tap to clear these. Previously when I had trial fitted the primary case I had realised that neither the special brake lever stop nor the side stand bolt would screw fully home, so I took the opportunity to clean the threads on those out - 5/16" CEI. Investment in tools pays of pretty quickly. 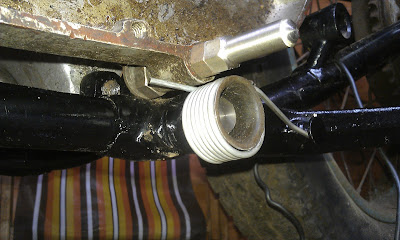 Here's the side stand trial fitted, to check it's function and to start to establish what spacer we need behind the inner primary case. Is the way that spring bears on the primary case as the designer intended, I wonder? 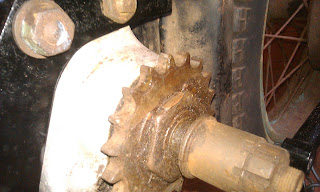 However, with the gearbox fitted we could take a look at the secondary chain alignment.  I wanted to use a toolmakers clamp to set a straight bar against the face of the  sprocket, and point it at the rear wheel sprocket. So I cleaned up the face of the sprocket in preparation. Of course, anyone who has  tried this will know there is no space to get a clamp in there! 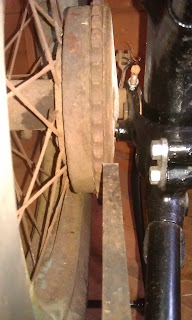 So, it had to be hand held against the sprocket, which was a bit of a challenge when taking the picture! With the straight edge held against the gearbox sprocket, and the rear wheel roughly aligned, we appear to have a match. There is a small burr on the end of the straight edge, where it approaches the rear wheel sprocket which tends to confuse the eye a little but the exercise shows us that we have good alignment there.

So, onto the next task - building up the primary drive and the clutch.

This is pretty straightforward, since we have done it before - but never with the gearbox & engine fully bolted in!

The first small surprise was that when I had the inner primary case in, I fitted the top screw (the visible one) from the outside. I then found more screws (I don't have the original ones) for the lower positions and was confused when I found no thread - thinking I was in for a helicoiling session, I looked further and on the basis that both sides of these lugs are milled flat it looks like the lower three use hex bolts and nuts. 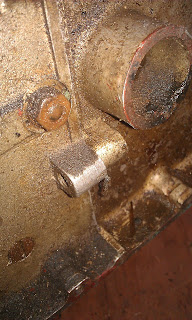 Any how, pressing on, we could then bolt up the inner case and re-fix the brake pedal stop at the bottom. 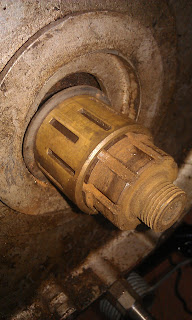 Next came the clutch race and it's thrust washers, which entailed making a special scraper to clear the gunge out of the clutch centre splines.

That all went fine.

Whilst I have new rollers for this bearing, there is no point in fitting them now - I will only risk losing them when I strip it again. 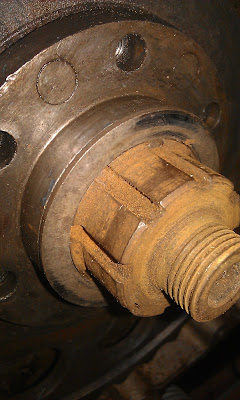 Getting around to fitting the clutch centre, here we can see the clutch sprocket has been fitted over the needle roller bearing. The  final thrust washer is in place as well, showing where the clutch centre will fit. I'm happy to see that the sprocket, bearing and thrust washers all fit and that everything is lining up for the centre to fit perfectly. 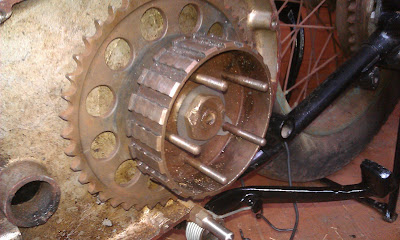 And here is the clutch centre in place, with a new tab washer. For some reason the new centre nut doesn't want to fit, thought the old one is OK. that proves the mainshaft thread is good which is the MAIN THING! 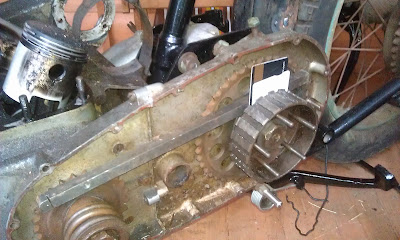 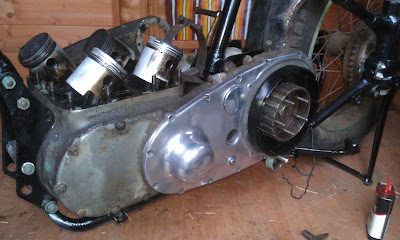 Two pictures here show the clutch basket in place with & without the clutch cover. Everything is running smoothly & freely, no sign of any misalignment here, so I think we can pronounce this potential problem, originally discussed in the Gearbox Woes post,  null & void. 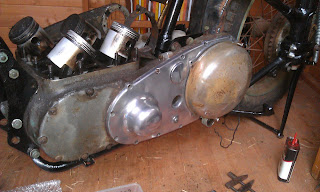 Why we have a G107 gearbox number remains a mystery. Error in the factory? Curious that it has a J51 date code, which is November 1951, several months after the bike was shipped. Replacement part? warranty item? accident damage?