To get further into the engine, we have to remove the crankshaft shock absorber. This consists of a sleeve splined to the rear crankshaft and hence driven by it. The sleeve has a external spline as well, and a section of it's length which is a plain bearing surface. The engine sprocket runs on this plain section, and is machined with a face cam. The corresponding cam profile is machined onto a further part, which is splined internally and is driven by the sleeve on the crankshaft.

In order for the crankshaft to drive the engine sprocket, and to prevent the face cams from riding over each other (resulting in no drive) the whole assembly is held together by a heavy spring. 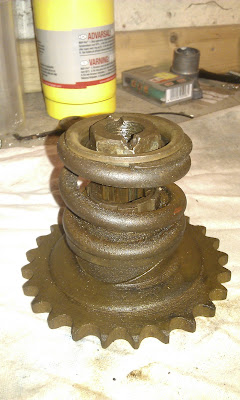 Hence if the system is running smoothly, the cams are held together by the spring - but if there is a sudden high torque the cams are free to slide over one another and compress the spring. This thus forms a transmission shock absorber, rather like the rubber cush drives commonly found in more modern machines in the centre of the clutch. 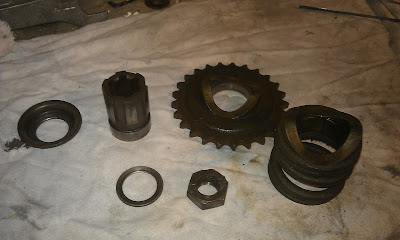 I guess that at the time these engines were designed rubbers were not ably to withstand the heat & oil found in the primary drive.

Mr Waller however lists 25T, so it must be OK!

The only thing I could find at fault was the retaining nut, which is pretty mangled and the split pin was missing. 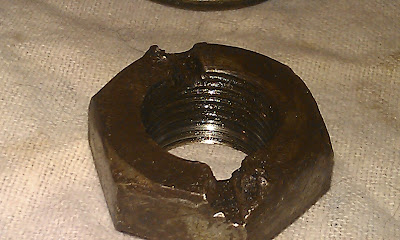