Burman gearboxes fitted to bikes of the 1950's are often provided with a gear position indicator, or neutral indicator which is always handy as there may be more than one neutral position in the box... (!)

The indicator is nothing fancy, no dial on the headlamp nacelle or coloured lamp to wink at you; it's a simple pointer or or rotating bobbin with a fixed indicator on the kickstart case. The CP gearbox fitted to the W/NG has a pointer made from sheet steel fixed to the gearbox cover, with a moving pointer, also sheet steel, fixed to the gearbox camshaft. When the two pointers align, you have found neutral in its normal position between 1st and 2nd gear. It will also tell you if you have found the other neutral that can appear in these boxes, between 2nd and 3rd when the bike is going nowhere and the clutch is engaged, and the gear indicator is pointing forwards...

The W/NG gear indicator was incomplete - it had the fixed pointer, but the moving one was missing. As found: 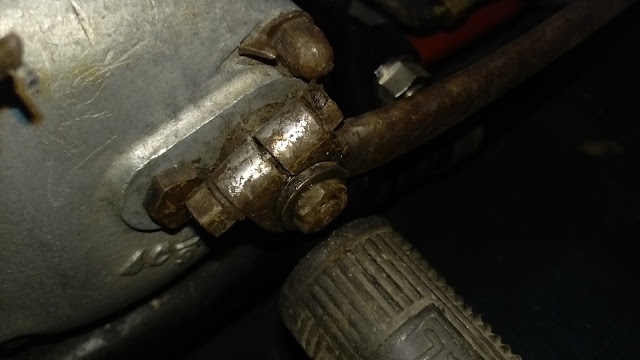 With an appeal on the AOMCC forum, I soon found what was supposed to be fitted to W/NGs of this era. A kind member, Ian Scott, found an original indicator in 'patinated' condition that was just right: 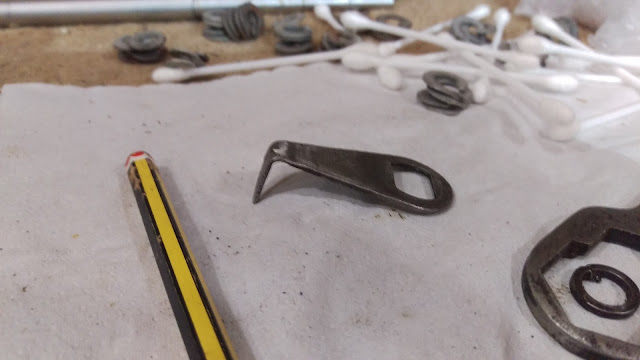 This was easily fitted. The nut shown here retaining the indicator should, according to the factory parts list be a domed nut; this one has obviously been there for years and I have no intention of changing it: 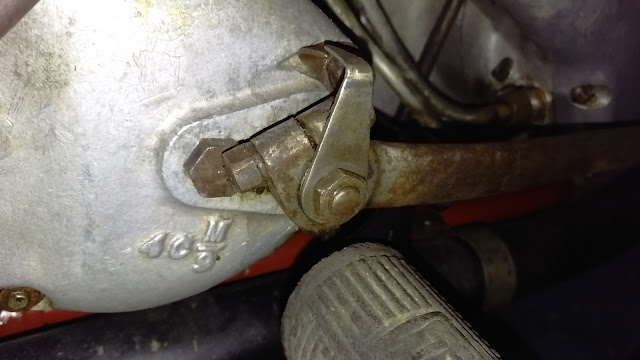 Looks the part doesn't it!
Posted by CharlieCeng at 16:28