Old instruction books frequently tell you which oil to use in the summer and which oil to use in the winter, so that when our engines are hot, we can still retain sufficient viscosity in summer heat, and that when the weather is cold we can still get the oil moving quickly enough to avoid engine or ankle damage from reluctant kickstarters from oil that refuses to flow. Summer weight oils are of a higher viscosity grade than winter weight oils, for a given engine, and yo change the when the weather starts to get cold.

This is obviously not ideal, and in 1948 an American called Bob Lancaster looked to improve the performance of oils in the Ariel Square Four raced by Gus Johnson.

Bob took a polymer from a company called Enjay Chemical, and blended it with SAE 20 oil to boost the viscosity when hot to near that of SAE 50, while retaining the SAE 20 properties when cold. It was so successful that Bob started a company to manufacture and market the oil, and Torco is still trading today.

So we know that the temperature range the oil is exposed to in many vehicles can be wide and that the difference in viscosities for most single-grade oil is too large between the extremes of temperature to provide the lubrication performance we need. To bring the difference in viscosities closer together, as Bob Lancaster showed us, special polymer additives called viscosity index improvers (VIIs) are added to the oil.

Breakdown of VIIs is a concern in modern motorcycle applications, where the transmission may share lubricating oil with the motor - though obviously that doesn't concern those of us with separate gearboxes. For this reason, synthetic oil or motorcycle-specific oil is sometimes recommended.

In addition to the viscosity index improvers, oil manufacturers include other additives such as detergents and dispersants to help keep the engine clean by minimizing sludge build-up, corrosion inhibitors, anti-wear additives and alkaline additives to neutralize acidic oxidation products of the oil. Today, we are very concerned with old Square Four engines that have not had their sludge traps properly cleaned - we don't want modern detergents loosening particles and blocking oilways, so we clean them out on rebuild and use a detergent oil with a filter, to keep the sludge in suspension and trap it in the filter..

It is these additives which start to make owners of classic motorcycles think carefully about their oil. For example, most oils produced today are for modern vehicles and have a minimal amount of zinc dialkyldithiophosphate (called ZDDP, so you don’t have try and pronounce dialkyldithiophosphate) which is an anti-wear additive designed to protect metal surfaces with zinc should they come into contact, which is obviously desirable for our camshafts and followers and you might think that you want a lot of zinc in you oil. The problem is, engineering is full of compromises and one is that the quantity of ZDDP is limited because it damages catalytic converters; other extreme pressure additives can limit the performance of wet clutches (clutches running in engine oil) so we have ‘classic’ oils, manufactured to older specifications which contain the additives we need and reflect that not many classic motorcycles have catalytic converters – but a lot of us, Bantam owners included, have wet clutches. Another win for Ariel separate clutches though!

Other EP additives, like calcium sulfonates, are available for additional protection under extreme-pressure conditions or in heavy duty performance situations. Calcium sulfonate additives are also added to protect motor oil from oxidative breakdown and to prevent the formation of sludge and varnish deposits.

Some additives contain molybdenum disulfide which reduces friction, bond to metal, or have anti-wear properties. MoS2 particles can adhere to steel surfaces and some Trabant engine liners were even treated with MoS2 coatings during manufacture to reduce friction.

Now you might be thinking this is all a bit bewildering. OK, I understand viscosity, but how do I know which additives are good and which are bad, and how do I know whether the supermarket 20w/50 I just bought has them in?

Engineers to the rescue!

The American Petroleum Institute (API) governs most of the activity in the industry which has paid my wages for the last 25 years. In addition to the SAE classifications for viscosity, we have API specifications for oil performance

The API standard includes alphabetical ‘service classes’ for lubricants, which really refer to the ability of the oil to perform a given task (like lubricating a sliding tappet against a camshaft, for example). These have two general classifications: S for "spark ignition" and C for "commercial/compression ignition" (diesel engines to you and me). Engine oil which has been tested and meets the API standards may display the API Service Symbol (also known as the "Donut") with the service designation on containers sold to oil users.

This started in the 1930’s with the SA classification; today we are up to the ‘SN’ standard. The SN standard refers to a group of laboratory and engine tests, including the latest series for control of high-temperature deposits. Current API service categories include SN, SM, SL and SJ for petrol engines. All previous service designations are obsolete, although motorcycle oils commonly still use the SF/SG standard reflecting the need to control EP additives to protect our clutches and our camshafts. 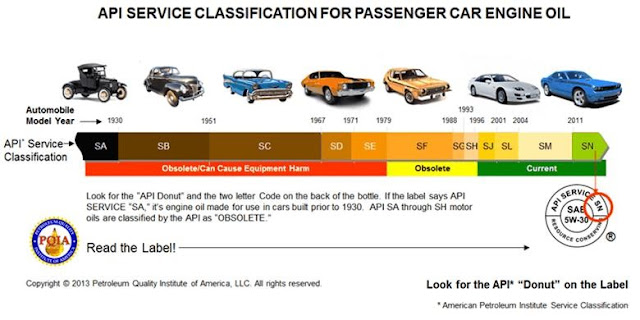 Since the SG standard, all categories for petrol engine lubricants have placed limitations on the ZDDP content due to the effect ZDDP has on catalytic converters. In API SG rated oils, this was at the 1200-1300 ppm level for zinc and phosphorus, where the current SM is under 600 ppm. This reduction in anti-wear chemicals in oil has caused premature failures of camshafts and other high pressure bearings in many older automobiles and has been blamed for pre-mature failure of the oil pump drive/cam position sensor gear that is meshed with camshaft gear in some modern engines.


Synthetic lubricants were first synthesized, or man-made, in significant quantities as replacements for mineral lubricants (and fuels) by German scientists in the late 1930s and early 1940s because of their lack of sufficient quantities of crude for their (primarily military) needs. A significant factor in its gain in popularity was the ability of synthetic-based lubricants to remain fluid in the sub-zero temperatures of the Eastern front in wintertime, temperatures which caused petroleum-based lubricants to solidify owing to their higher wax content. The use of synthetic lubricants widened through the 1950s and 1960s owing to a property at the other end of the temperature spectrum, the ability to lubricate aviation engines at temperatures that caused mineral-based lubricants to break down. In the mid-1970s, synthetic motor oils were formulated and commercially applied for the first time in automotive applications. The same SAE system for designating motor oil viscosity also applies to synthetic oils.

Higher purity and therefore better property control theoretically means synthetic oil has better mechanical properties at extremes of high and low temperatures. The molecules are made large and "soft" enough to retain good viscosity at higher temperatures, yet branched molecular structures interfere with solidification and therefore allow flow at lower temperatures. Thus, although the viscosity still decreases as temperature increases, these synthetic motor oils have a higher viscosity index over the traditional petroleum base. They're specially designed properties allow a wider temperature range at higher and lower temperatures and often include a lower pour point. With their improved viscosity index, synthetic oils need lower levels of viscosity index improvers, which are the oil components most vulnerable to thermal and mechanical degradation as the oil ages, and thus they do not degrade as quickly as traditional motor oils. However, they still fill up with particulate matter, although the matter better suspends within the oil and the oil filter still fills and clogs up over time. So, periodic oil and filter changes should still be done with synthetic oil; but some synthetic oil suppliers suggest that the intervals between oil changes can be longer, sometimes as long as 16,000-24,000 km (10,000–15,000 mi) primarily due to reduced degradation by oxidation.