Some while ago I promised to tell you about a little off-grid electrical project. Why off grid? Well, my garage workshop has no electrical power, in fact it has no utilities at all. A call to UK Power Networks, who are responsible for the cables in our streets revealed that to hook the garage up to the National Grid, given that the nearest road with a mains power cable was about 50 yards away, was going to cost £4000.

Preferring to spend that sort of money on other things, and enjoying a bit of a challenge. I set about building my own system. 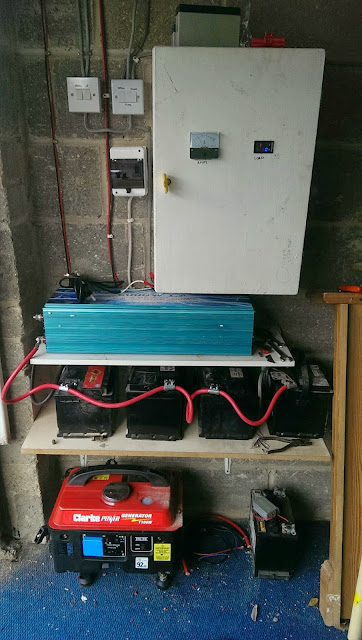 A friend of mine, Martin, was kind enough to give me a small solar panel in exchange for some welding I did on some wardrobe rails. This, along with an old battery from our Morris, was enough to get going.

I stuck the panel on the roof, hooked it up to the battery and proved to myself over a few weeks that the battery would stay charged.

I had some old fluorescent lamps that I rescued from another garage, at a property we had been working on. To drive these, I would need an inverter.

I found a 3kW Lucas pure sine wave inverter on eBay, at £45 - faulty. I hooked this up to the battery and one of the lights, which tried to start - and made the inverter squeal and trip within a few seconds.

My clever & pretty wife, listening to me racking my brains trying to understand what was going on, asked why I didn't just run the lights off the battery. Investigating this idea I found that you can buy 12 V CFL bulbs, at up to 20 W, which although quite expensive (£8 each) worked well. I put 5 of them up, over the bench and in the middle of the room, with an extra one in the loft.

Getting into this now, I calculated how long my batteries would last using my new lights and my inverter. It became obvious that I was going to need more battery capacity and a bigger solar panel. In our local car spares shop, I asked what they did with batteries they removed from customers cars and found that old batteries basically have no value... So I am now the proud owner of four 60 Ah batteries. A subsequent visit yielded two new batteries, both out of warranty and unsaleable, at £5 each...

Testing my battery bank with the inverter was very successful, operating various power tools with ease, but always accompanied by a high pitched wine from the inverter... Which would trip after a while.

To cut a long story short, it failed and I now I have a shiny new 7kW pure sine wave inverter. This is the blue beasty in the picture, and coupled with about 240 Ah of battery capacity, I can run my MIG set and any other electrical widget I choose with ease, but not too frequently.

After a couple of winters use, it became obvious that any serious workshop time would have me running out of capacity in a very short time. More serious engineering was needed!

I made a spreadsheet to calculate the loads I would be imposing on the system, and the power I would be able to generate. Here you see the annual expected usage for various loads, and the annual power that I could expect to generate: 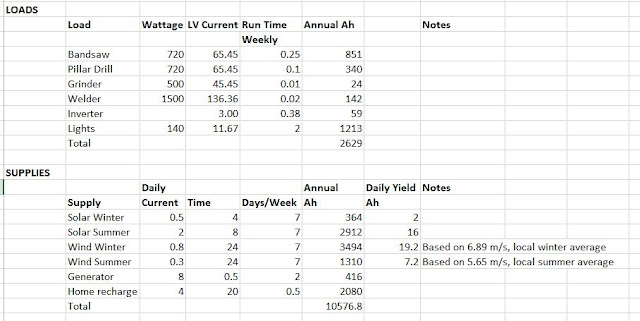 You will see that I have a wind turbine in the power budget. This is due to the fact that currently my PV cell is poorly sited and shows a maximum of 0.4 A on a winter day, attempting to charge some 240 Ah of battery capacity. Now, a second table to looks at the annual load/power balance:

These numbers are all amp hours and the fact that they are all positive suggests that on annual basis I expect to have a positive balance from any one source; Summer usage bears this out. With the sun high in the sky I can easily generate 4 A from the PV cell all day long, every day, and of course I don't use the lights as much.

Winter experience shows that I can run the batteries flat, especially using an inductive load. Realistically of course neither usage nor charging is spread evenly over the year, so we have to look at short term use. I made this spreadsheet to look at two typical days in the workshop, and the power they might consume: 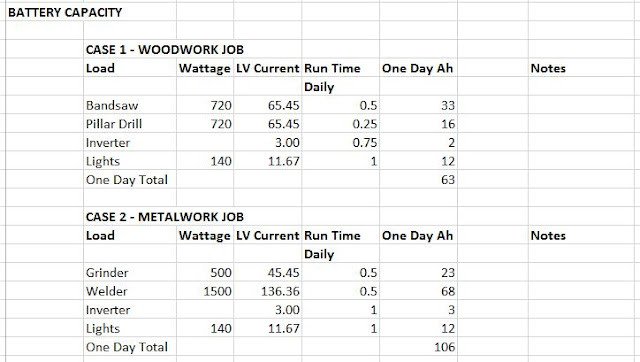 This gives you a clue about the amount of discharge that might occur on one day, which is important when designing the capacity of the battery bank and the charging system.

To recover from these jobs, we have to look at the charging currents available, and the time for which they might be available, at given times of the year. These figures are for the 'metalwork' job, since at 106 Ah this is the worst case - the battery bank is allowed to discharge to a conservative 75% of its capacity to maintain the battery health:

So the spreadsheet tells us that the battery bank capacity is too small for either job, but only marginally so for the woodwork job.

It also tells us that with only solar energy, after doing that metalwork job I would not be able to go back in the workshop and do it again for 52.8 days in the winter, but that I could do it again 6.6 days later in the summer. 52 days is clearly not acceptable, and reflects the current poor siting of my PV cell. 6.6 days in the summer is acceptable at the moment, but I expect to use the system much more frequently in the future.

So my options are:
In addition to this I will need more battery capacity, or to convert to deep cycle batteries; or both.