As you will have seen from my 'Old Warrior' post, the bike was located in Tuscany; I needed to learn about shipping bikes around the world. Speaking to various folk, including a colleague with a penchant for vintage OHC bikes (think Velocette KTT, Norton International, Ducati etc and you will the the idea) I lucked upon Chas Mortimer Ltd.

Chas began his racing career at Brands Hatch in July 1965, aged sixteen. His father Charles Mortimer Senior raced cars and motorbikes at Brooklands in the 1930’s and then after the war both his parents raced cars at circuits such as Goodwood and Silverstone. Chas’s maternal grandfather was the chief test pilot for Vickers Armstrong in Weybridge (a few 100 metres from my office window!) and flew the first test flight on the Spitfire. He was also the pilot who did all the tests with Barnes Wallace on the bouncing bomb, a weapon that succeeded in destroying the Ruhr dams with 617 Squadron in 1944.

Coming from such a family it seems inevitable that speed was in his genes and that Chas went on to become a professional motorcycle road racer for nearly twenty years. His first ever racing bike was a 250cc Greeves Silverstone but Chas eventually became an official Yamaha factory rider during the 1970’s and 80’s winning eight Isle of Man TT races during the same period.

Today Chas still rides for Yamaha in Classic events throughout Europe during the summer months as well as running the company.

There is a very interesting story which has never been told about that bike. In Chas's own words:

Yamaha was invited to attend the centenary celebrations in the Island and they were asked to bring one of the original 4 cylinders, which were ridden by Phil Read, Bill Ivy, Mike (Michelle) Duff and the Japanese Yamaha test rider Motohashi in period (1965/6 ?). At the end of the season after the big bust up between Read and Ivy Yamaha pulled the plug on the team and all the bikes were sent back to Japan where all except this bike and a 125 were crushed. These two were sent to Yamaha's museum where they resided until the invitation to the Centenary meeting which arrived in January. They decided only to bring the 250 and took the bike from the museum and put water in it to see if it would start but it poured out as quick as they could put it in. Therefore the stripped it down and manufactured new magnesium crankcases, cylinders and heads etc to get the bike up and running. There is still one of the original mechanics alive and he rebuilt it and it fired up with the new parts on first push.

I was invited to ride it in the big parade and Michelle Duff rode it in the Yamaha Parade. We went to Jurby to set it up and we got it running sweet as a nut but I remember Bill telling me that when they seized they gave absolutely no warning unlike the old TZ’s. The Japanese mechanic had all the settings from Bill (in 1965 I think) but I was fearful of having the thing seize on me at Glen Vine or Alpine Cottage so I told him to put a size bigger jet! He tried to dissuade me telling me that it would start to misfire in 6th.and 7th.gears on full song but I insisted. Needless to say he was absolutely right and by the time I got half way down Bray Hill in 6th.it started misfiring. Anyway it was an absolute missile even with a misfire and the Japs were over the moon because I caught and passed Phil around the Nook and crossed the line in front of him (he was on a Gilera 4). It was the best Island lap that I have done for years. Fantastic memories.

Chas's love for motorcycles led him to form the company and you can be sure that your vehicles will be treated with as much care as one of his own motorcycles. Chas and his team collected my 1942 Ariel from sunny Tuscany, where it had spent the last 74 years. Really helpful, great to deal with, and they handled the cash as well. The bike arrived this morning, well strapped down in the van in perfect condition. 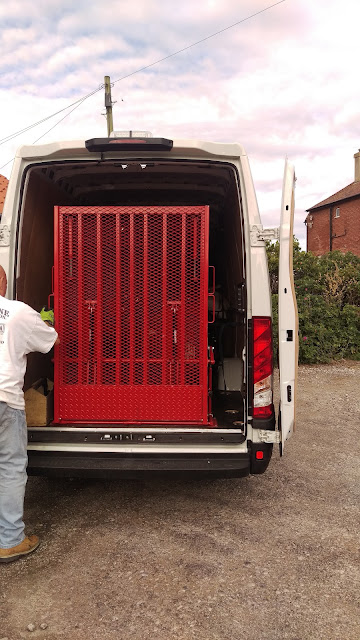 It's a service run for enthusiast bikers by enthusiastic bikers; the driver was a man who clearly enjoyed himself, driving all over Europe chatting to bikers. Who wouldn't! 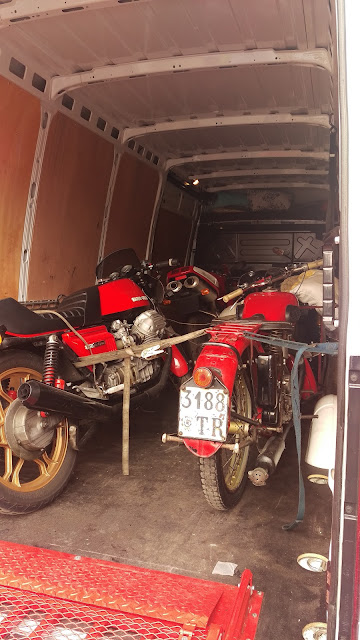 Here's the W/NG still in the van; I had hoped the driver would leave that lovely Mk1 Le Mans in my garage as well, but that will have to wait for another day. They will be getting my business next time.
Posted by CharlieCeng at 16:47