Trip to the City

An eye test gave me an excuse for a trip to the city yesterday: not a particularly nice day, but the SQ4 has not been out for a bit so it was time to stretch her legs.

I chose an A-road route outward, with 60 mph stretches for several miles and she is flying along; a mixed A & B-road route back gave me more of the same with some twisties and peaceful roads at the end: 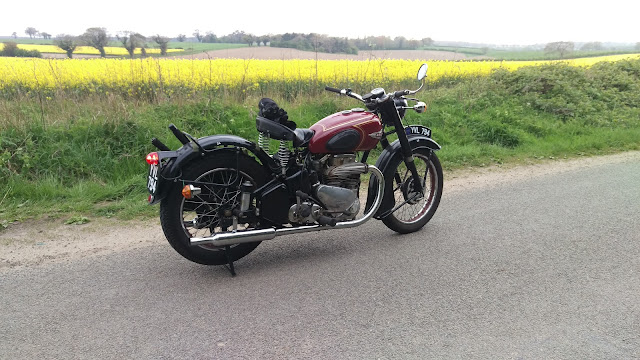 At the start of the trip, the early morning starting ritual revealed the carburetter flooding: switching off, starting the engine, and switching on again, the flood did not repeat itself - I think the float sticks occasionally.

On the road, my 28/24 psi front/rear tyre pressure combination may be questionable. The front end feels light and not terribly planted - I may need to reduce the pressure on the front. The bike wants to drift to the side of the road so I think I will look at the wheel alignment.

In town traffic, in the morning, you can feel that she's not happy. She gets hot, and the carburation appears rough - not too bad to be called a misfire but not relaxing either. Arriving home, I noticed the same arriving in our small seaside town, and you can see oil on the HT leads so perhaps this is not carburation at all. The clutch also starts to drag a little, so maybe some adjustment there.

Stopping to pick up some Argon on the way back (The TIG welder is hungry again) I noticed a slight clonk when moving the handlebars - this may not come from the front end, but needs investigating.

I also noticed a little oil leak, two in fact - both from the primary drive, one at the clutch and one at the front. The chain is also not getting any lubricant.

I had the LED headlamp on all the way back - it's nice to see the bike balances charge in town with this fitted. Not so nice was the flickering rear lamp apparent with the bike idling, when I took these pictures. I also noticed that I had lost one of the 4 BA screws that retain the ammeter/switch panel to the headlamp. More fool me, for not fitting shakeproof washers! 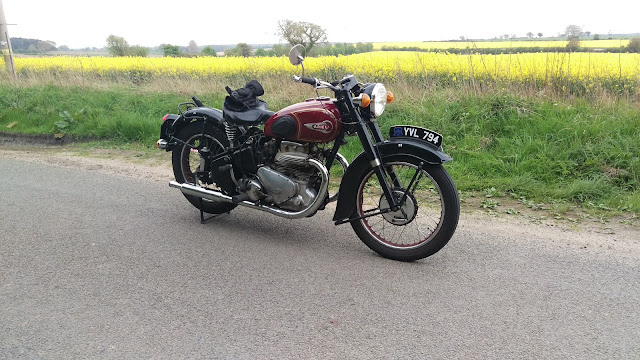 So, a few little jobs (including the perpetual speedo fault) but generally a grand day out. I must have been going some, because my shoulders ache this morning!