Last weekend, my Sunday morning jaunt ended after 1.5 miles with a screech/rattle (strange sound in between the two) that has appeared while accelerating up a hill. I think it's transmission - out of gear the engine appears to be fine. Turning the rear wheel by hand with the clutch out and the bike in gear sounds rattly - I think I will have to take a look at the clutch. The noise changes with clutch operation, less harsh perhaps and appears to be related more to road speed than engine speed.

Of course, as I write this I sound like I have a misplaced confidence that no Square Four owner has any right to - you are always worrying that it is going to lift it's skirts above it's knees and show you a connecting rod when you were least expecting it. This time, I arrived home with the engine ticking over sweetly and it continued to do so when I parked up.

Running it on the stand, I couldn't replicate the sound, but I did notice the rear wheel is a lot more wobbly than it was when I built it.

A week or so later, after some busy time at work and contemplating that I might get the CX500 on the road, I found a bit of time to pull it apart. It's worth remembering that older bikes are often easier to fix than newer ones - my Square is a lot less complex than the Honda and it's much easier to work on.

All I need is this handy kit that I found in the bike's toolbox: 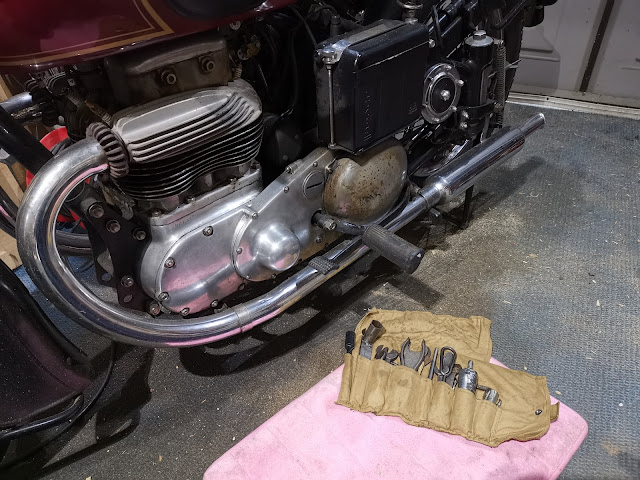 Or - not. Falling at the first fence, I found that I did not have a 3/8" AF box spanner in the tool roll. This odd ball size fits not only the clutch centre screws but crucially the exhaust pipe clamps - so I couldn't even start the job. I made a note to buy one for the tool roll.

With the pipe off, I slackened off the brake pedal and disconnected the brake light - that lets you remove the clutch dome. I might see if I can get a better shine on that patina: 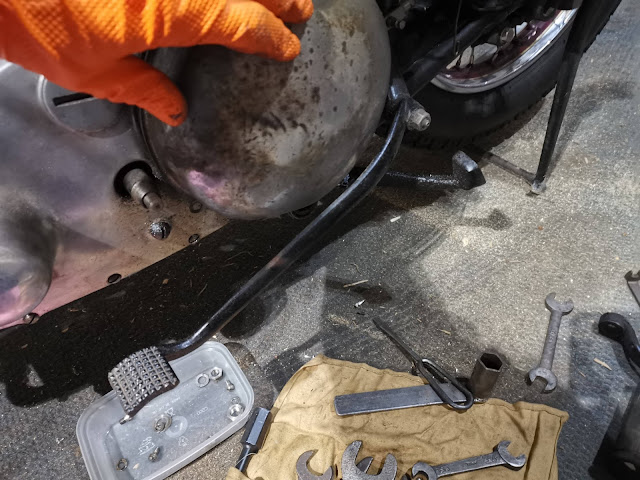 With the right tools, the clutch plate came off perfectly: 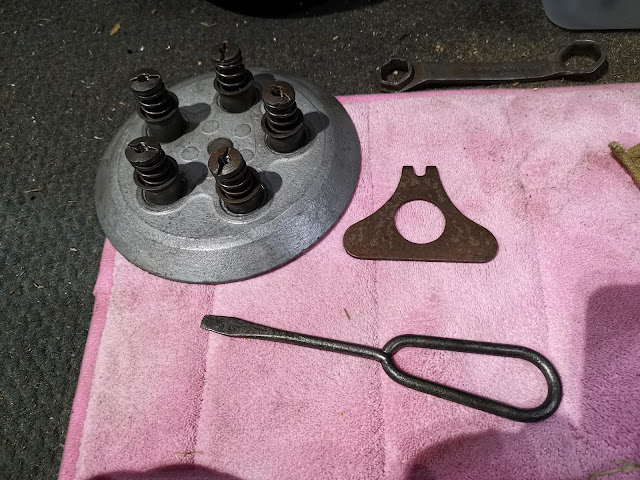 And it revealed a loose clutch centre nut, just as had been predicted by the AOMCC forum panel of experts. The nut was loose but still in place, but it probably wouldn't have come loose at all if I had been a bit more thorough with the tab washer: 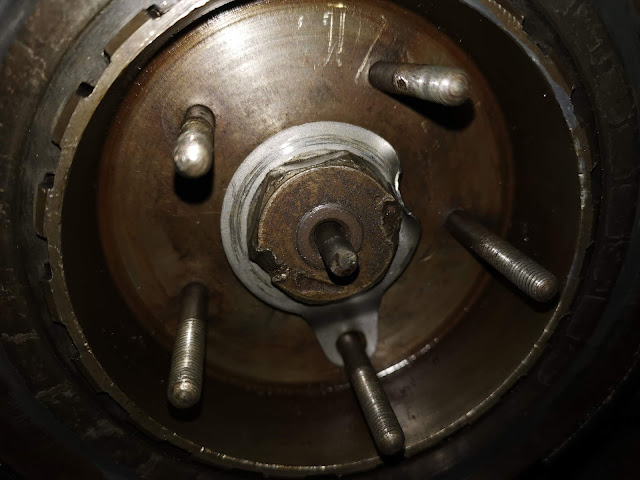 
The clutch plates are getting thin, but I have no wish to re-cork them right now, nor any cork; they need pulling out with this bit of hooked wire I keep in the tool box: 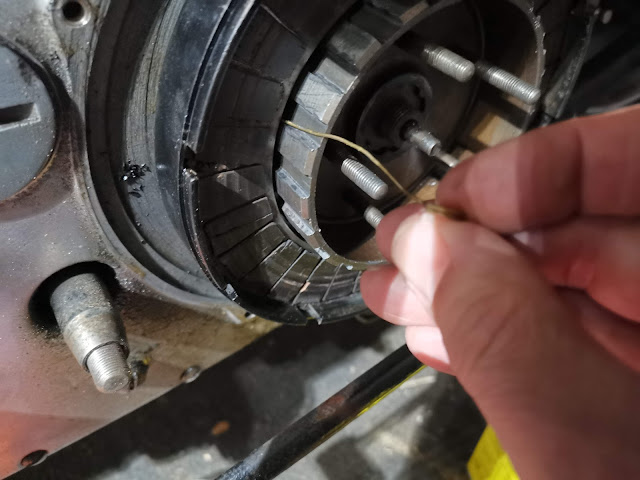 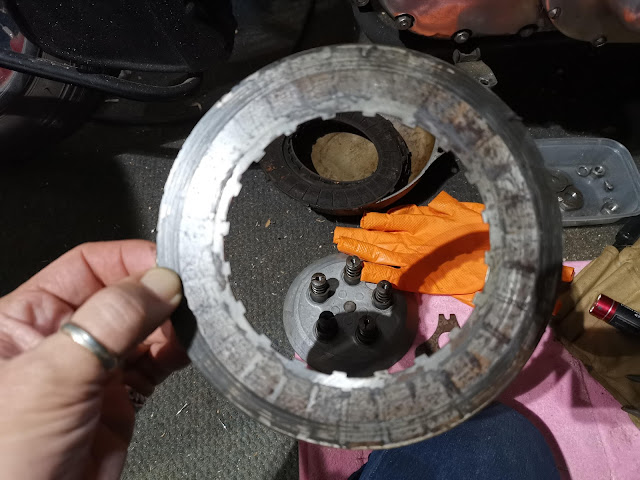 Here it is again - we will have to be sparing with it on reassembly. The splines are no worse than when they went in back in 2014: 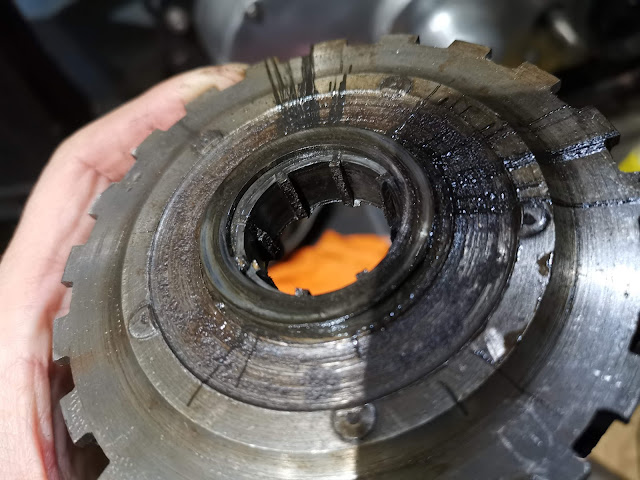 And again. Those screws are in place but very loose: 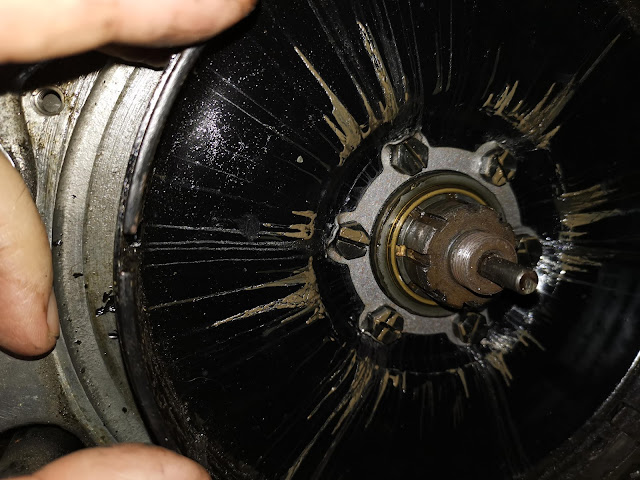 As can be seen in this video:


Thankfully, all looks well under the primary chain cover: 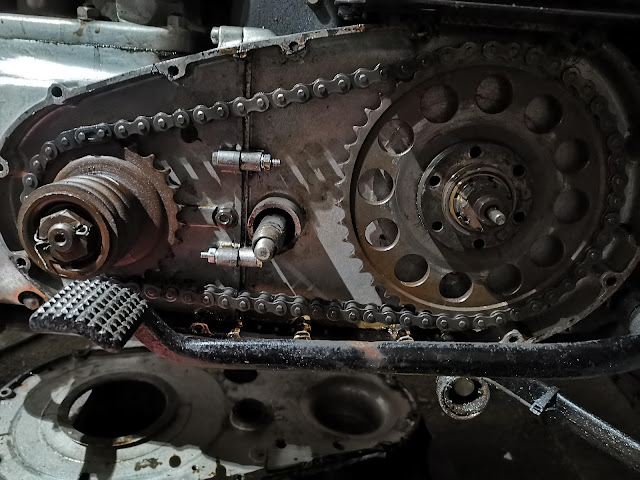 The shock absorber nut is exactly as it was when I fitted it back in 2014: 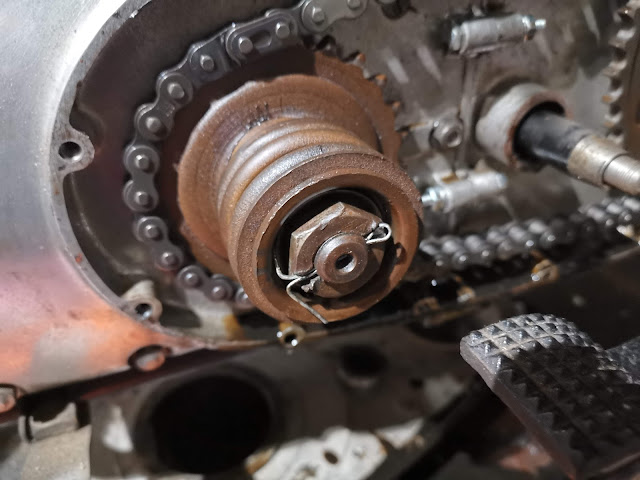 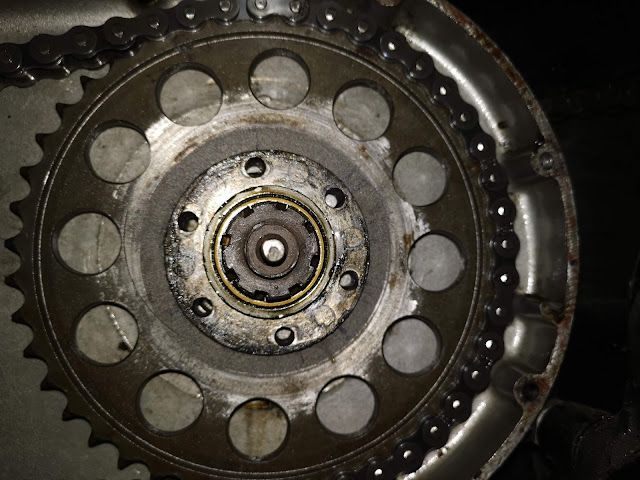 Having removed the chainwheel and carefully removed its bearing (with the twelve needle rollers) I set about removing the rear half of the chaincase. When it wouldn't come free, I remembered that the rear upper chainguard is bolted to the chaincase and that the bolt lives under the battery. This has not been off for ages as it has been no trouble at all: 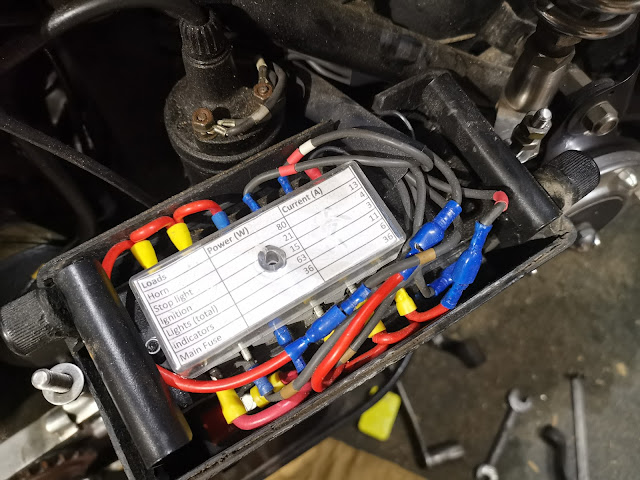 Here's the bolt I'm talking about. You have to remove the coil as well: 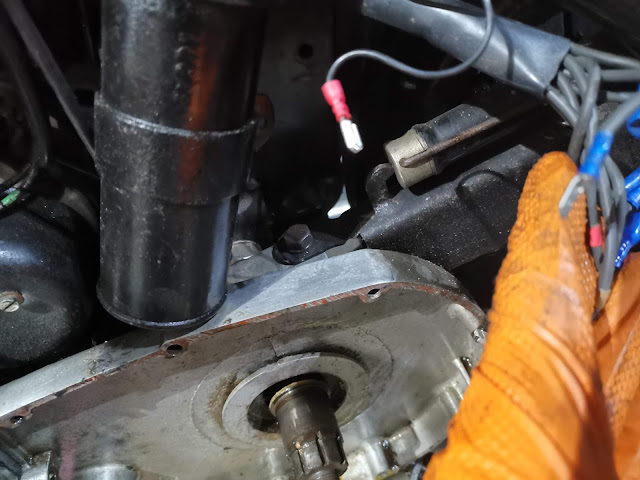 Once behind there all looked fine & dandy: 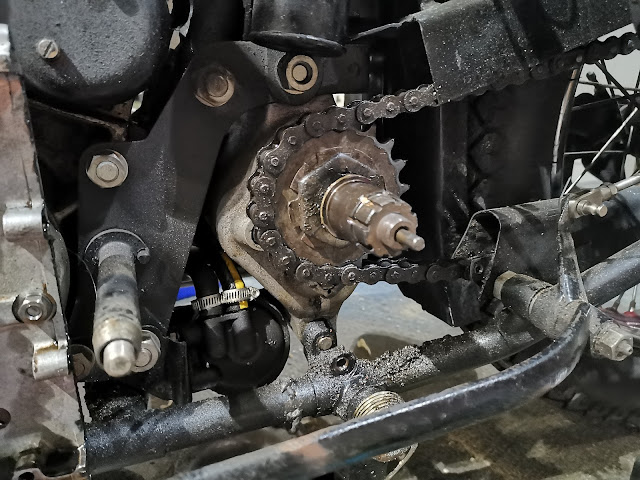 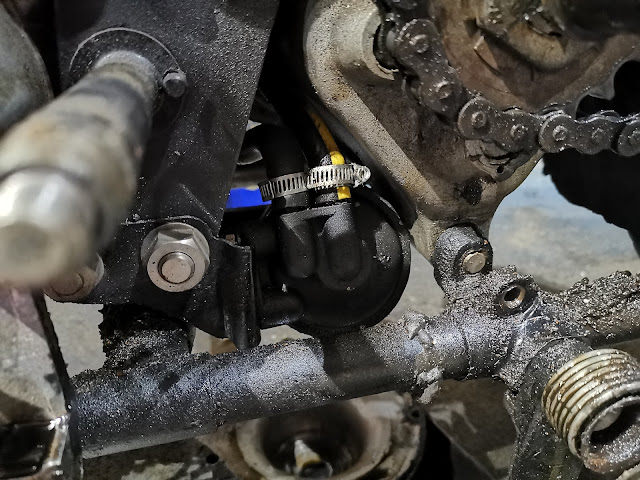 At close of play, the rear chaincase was back in place, sealed with Threebond 1215: 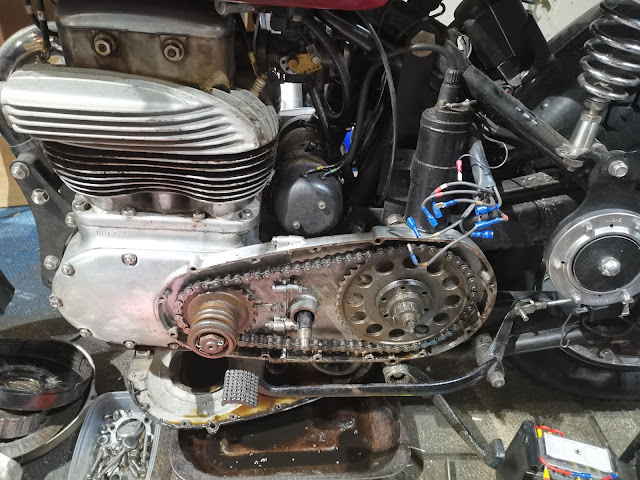 The next day I tensioned the primary and put the chainguard and the coil back in place, and the following day I put the primary case back together: 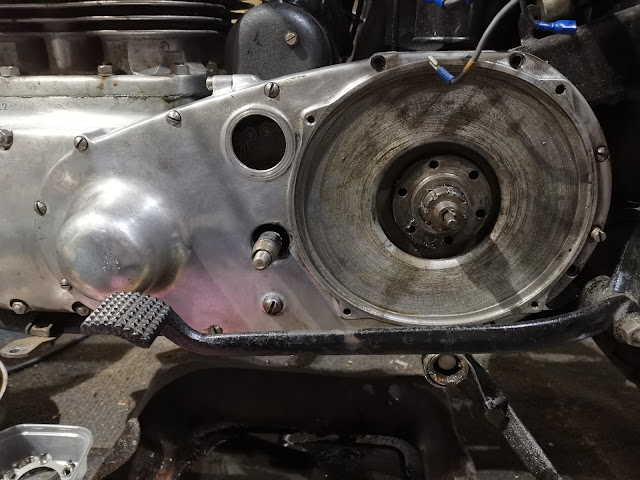 Next came the clutch rebuild. This time I paid much closer attention to assembling clutch basket to the sprocket, and the centre to the mainshaft retaining both with Loctite 243. 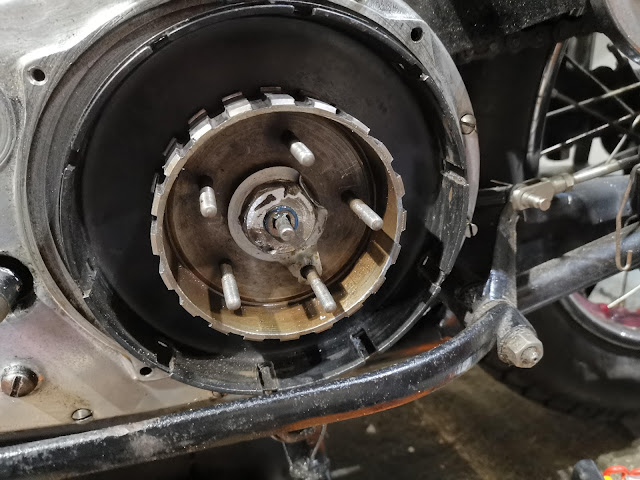 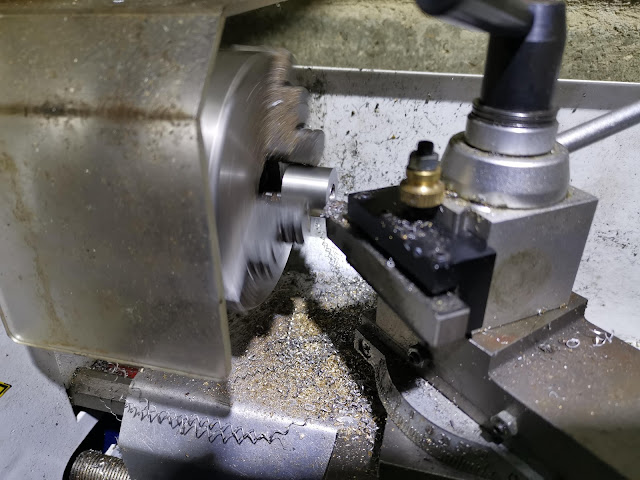 This is the truly awful side stand. I never use this, as it is far too short and consequently precarious. The tie wrap is there to make sure the spring cannot become disengaged from the lug on the leg, which would leave the leg flopping about: 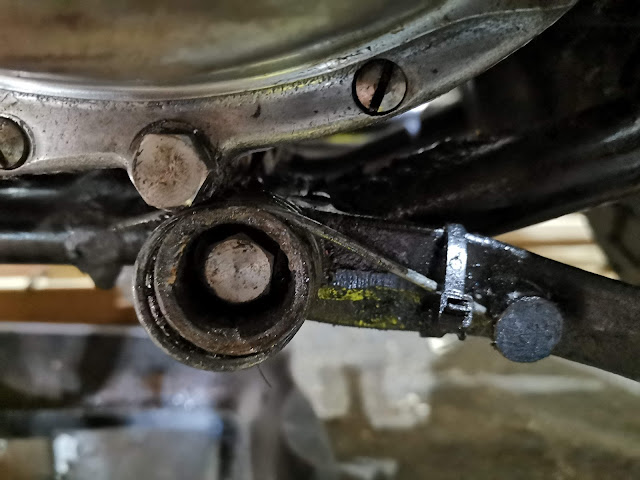 Assembling the battery carrier and it's spacers: 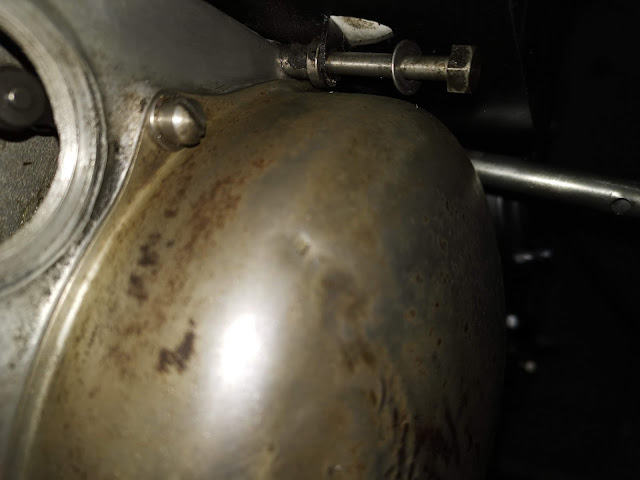 And all back together. 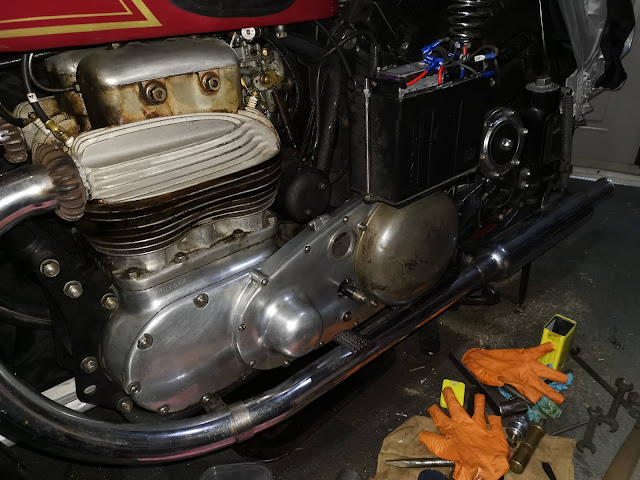