This week, I have been mostly cutting up pieces of cork... 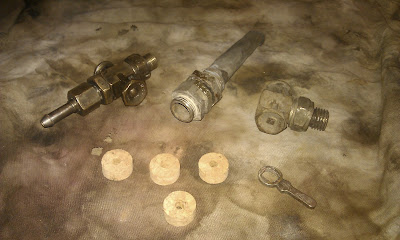 So while waiting for my fork tools to arrive, I have been cleaning up the petrol taps.

So, after ultrasound we have the Dremel & brass wire brush to buff up the nickel - which is has a distinct 'patina' brought on through years of service and inappropriate spanners. Nothing to stop them working though, at least, nothing that a new set of seals won't cure.

So, rummage around under the bench for the remains of a 1/4" thick cork table mat, and we can set about making some new ones:
having crawled around the workshop floor, since they shot out of the punch and went everywhere, go and have a cup of tea. Next: 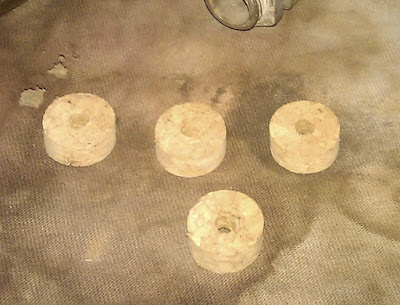 Next, oil the seals and wait a little while. Now you can put them in the taps, reassemble and revel in the fact that you have saved yourself £3.50!
Posted by CharlieCeng at 16:41