We're back - and it is engine build time.

Well at last. It may be nearing the end of summer, but what better time to get back up and running with the Ariel.

The Bantam is finished - it is now 12 V, and has had it's second engine rebuild. It's just carried me 25 miles around the country south of the city without missing a beat, even through a ford. It still doesn't like ticking over when it is hot though.

The Cyclemaster has been in the workshop for a look over. It is remarkably original as I had thought; it has a coaster brake and is a 25 cc model, but it has been some while with the spark plug loose and is siezed solid. I've put it aside for a rainy day as it's time to get back to the next step with Amelia, building the engine. Regular readers will remember that the gearbox is suspiciously offset, and part of the engine strip will include sitting the bottom end in the frame for an alignment check.

However today, there is not much biking time left. Just enough to make a little start and write a blog post. 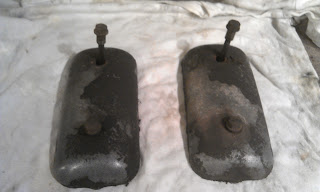 So here are some rather grubby rocker covers, taken off for the first time in years, and bringing two of their studs with them. 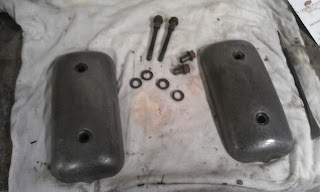 Here they are again, after a session with some white spirit and a cloth. What I need to do now is source some polishing mops, and some advice on what compunds to use. 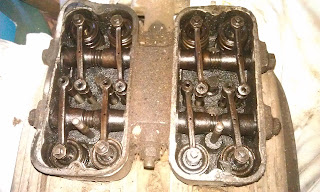 And here is what they revealed. Nothing apparently amiss there!

I'm going to spend the rest of the evening relaxing in front of the telly with a book. One by Mr C.W. Waller perhaps.
Posted by CharlieCeng at 19:30