Apologies if there doesn't appear to be much going on, but I have been away travelling again. Last week was spent mainly in Stavanger (-7 degrees C) and Oslo (-18 degrees C) and I have only just thawed out.

When I am away working, I tend to order stuff to get busy with when I get back. This was a similar trip. I have been talking to Bernard Ashpole in Bishops Stortford about doing a few jobs on the engine. I'm going there tomorrow and hopefully the following jobs will be done: 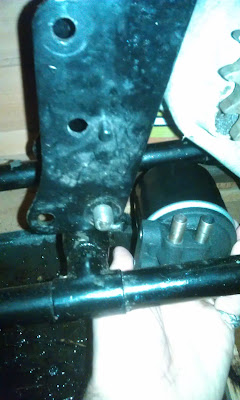 I ordered the dipswitch, horn button, and the indicator switch from the VMCC - these are now stashed away. I also ordered the oil filter, which I have to make a bracket for. I'll zinc plate that when I'm done.

I've also ordered a few more parts from Acme, this time the exhaust brackets & bolts and the 5 nuts for the QD rear wheel, and the front brake cable adjuster.

I have a full set of stainless engine bolts from them, and the timing cover, primary cover, and coupling gear cover screws. All very nice, as usual, and a pleasure to deal with. 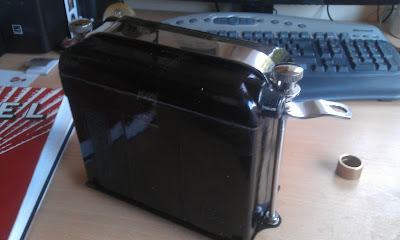 When I ordered the camshaft bush from Drags, Lee noticed that I had a battery box (the dummy Lucas GU11E) on back order - so this has now been delivered. Here it is in the tray I made earlier.

And lastly, I have been looking at the wiring. Moved by a discussion on cable ties on the AOMCC forum (how many rivets in a BR Standard Class5?),  I started to look closely at the wiring harness.

This discussion was so interesting that I have moved it to it's own post, here
Posted by CharlieCeng at 22:57