Amid engine machining and gearbox rebuilds, I decided it would be good to actually ride Amelia at some stage. Standing in the way of this was a set of very rusty spokes on both wheels. I'd hoped to get away with commissioning the bike on it's own wheels, without any form of rebuild (continuing my 'Phase 1' rebuild with no chroming or painting) but it was not to be. Both wheels had at least one broken spoke, and the remaining spokes were very thin in places.
So, a rebuild it had to be.

Amelia has half-width cast iron hubs, front and rear. The front is the 'Qualcast' half width hub fitted to all telescopic-fork Ariels prior to the appearance of the full-width alloy hub in 1956, and the rear is the 5-stud QD hub. Tyres are 3.25-19 front on a WM2 rim & 4.00-18 rear on a WM3 rim.

So, gathering parts. I used Central Wheel Services for spokes & tyres, since they give outstanding service and their prices for tyres were very good. I bought traditional Avon Speedmaster & SM MkII tyres, sill made today in a modern soft compound.

Close inspection of the spokes revealed plain spokes on both sides of the wheel at the front, with butted spokes on the drive side at the rear, plain on the other side. This matches the description in the parts book perfectly. However, it didn't match the records at Central Wheel, so I had to provide sample spokes for them to manufacture against. I chose stainless spokes and plated brass nipples this time, since I was not at all happy with the nickel plated steel nipples I bought for the Bantam which, 2 years on, are rusty.

The first thing you must do when rebuilding a wheel is to remove the old tyre. Don't think about using an old tyre for a second - even if it has tread and sound sidewalls, the rubber will be hard as nails and will have you  sliding down the road.

Removing tough old tyres can be a challenge, and I often dispense with the traditional levers in favour of a set of bolt cutters, which I use to cut the wires in the bead. On an older tyre, I'll cut the rubber with a Stanley knife to ease the passage of the bolt cutter. Don't bother trying this technique with a modern tyre though, there's wire everywhere!
Next, find yourself a nice stiff flat board. A piece of 3/4" ply would be good. We need to measure and record the offset of the rim to some datum on the original wheel - the brake drum is very convenient. Place the brake drum face down on the board, and measure the distance from the edge of the rim to the board

Amelia's front wheel offset is 1 1/4" to the rim on the brake side;

The next step is to photograph the spoke patterns. Make sure you have pictures of which spokes overlay others, which holes the go into on the rim and please also look at the dimpling on the rim holes and makes sure you know which way round the rim goes.

Those of you who have read my Bantam pages will know I have rebuilt at least one wheel with the rim the wrong way round - the result is not pretty as all the spokes will be bent.

My reference photos are shown further down the page.

The next step is a real turning point in the rebuild: take your best bolt cutter, and cut the all the spokes. Do it within an inch or two of the hub. If you cut near the rim, it will be much more laborious to feed all the rusty spokes through the dirt encrusted holes on the hub.

The next step is to get the rims off to the platers. This takes a while, so don't hang about! While they are gone you can clean up the hubs, get them painted, recondition the brake plates and replace the bearings.

Incidentally, I spoke to Tony at JD Wyatt Contract Polishing, who told me that it would reduce the cost of the polishing if I were to leave the painted rim centres in the blasted condition. Since this would provide a key for the paint, this is what I decided to do.

Spoke patterns for the rear wheel: 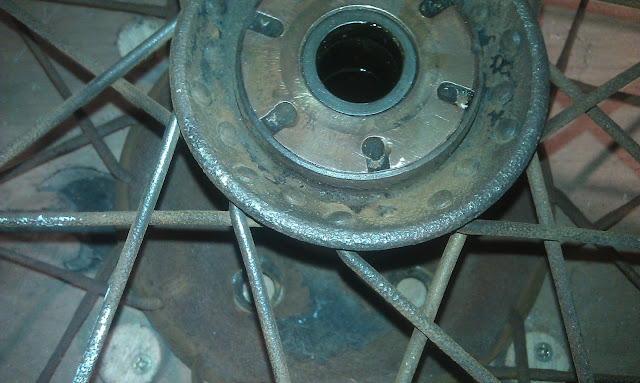 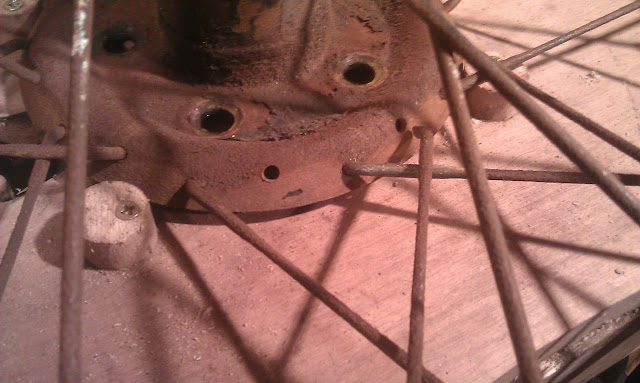 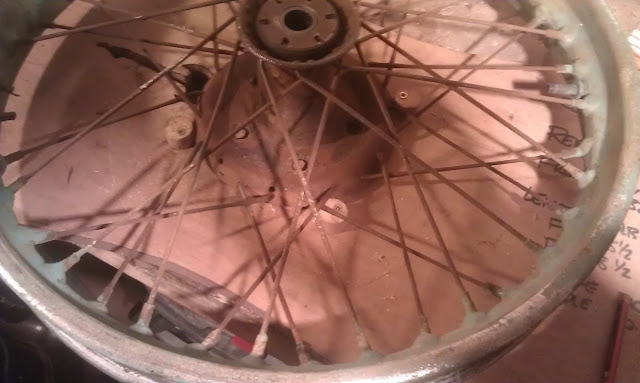 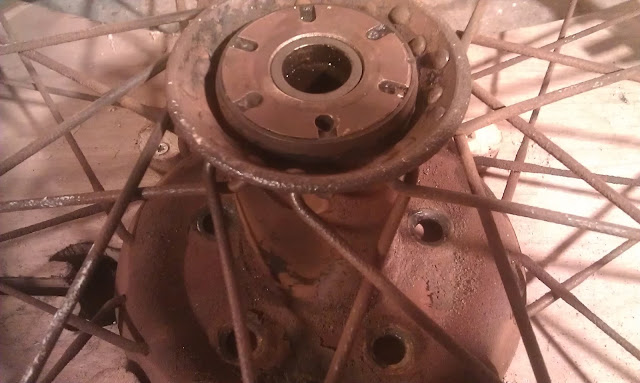 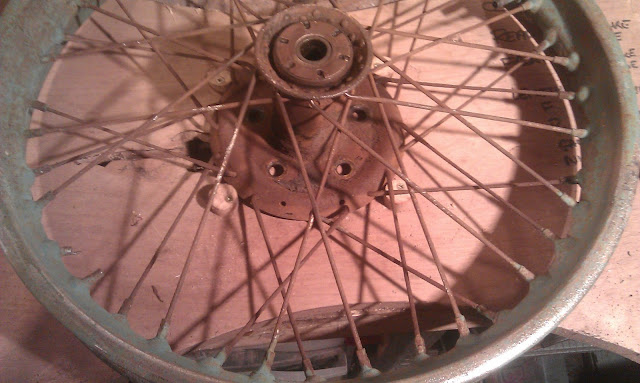 Spoke patterns for the front wheel: 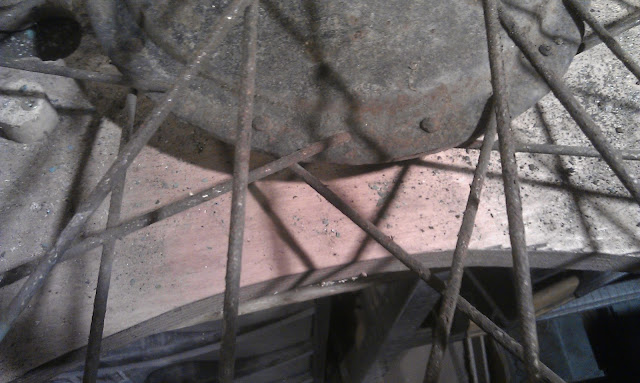 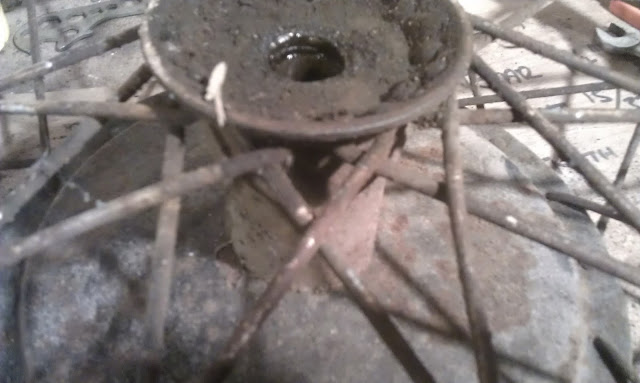 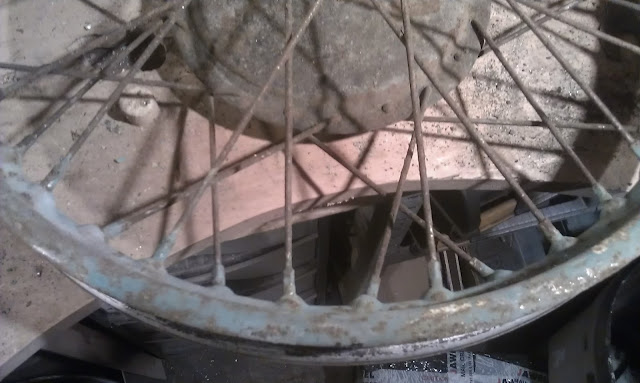 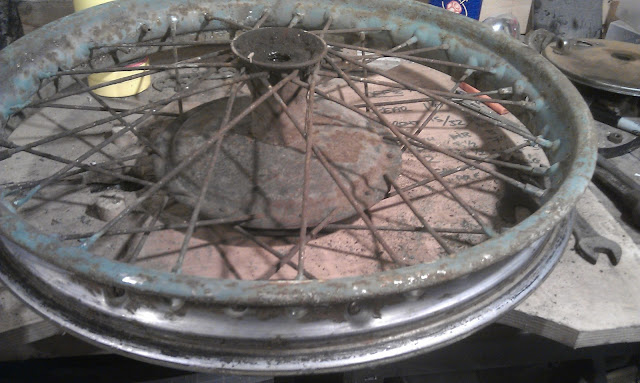