As I've probably mentioned before, I'm a stickler for originality, at least visually. If there is a period component that will do the job, then that is the one that gets fitted. However, I'm not afraid to modify components to make them more effective.

A case in point is the voltage regulator... 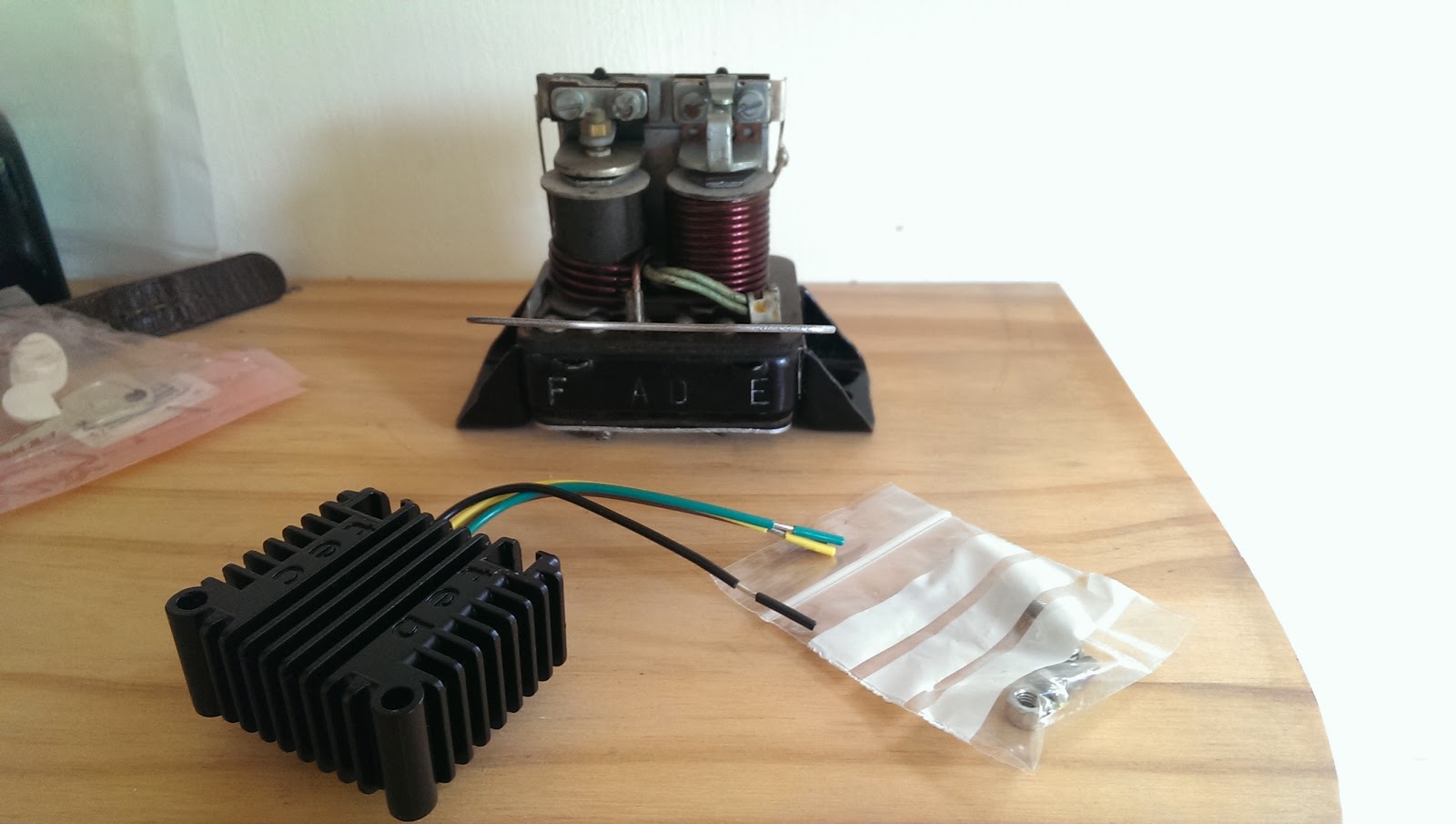 The voltage regulator I have with the machine - or the box of bits - is a 1962 Lucas MCR2 - obviously a replacement for the original regulator. While this is perfectly serviceable, it is not suitable for the sealed batteries I have fitted in the Draganfly battery box, so I am going to fit a modern V-Reg dynamo regulator which is designed to replace the mechanical regulator with modern reliable semiconductors, and can handle up to 100W at 6V and even more for the 12V version, provided the dynamo is capable of delivering this power. This device is proven and reliable and is available in Positive or Negative earth, also to run a 6V system. 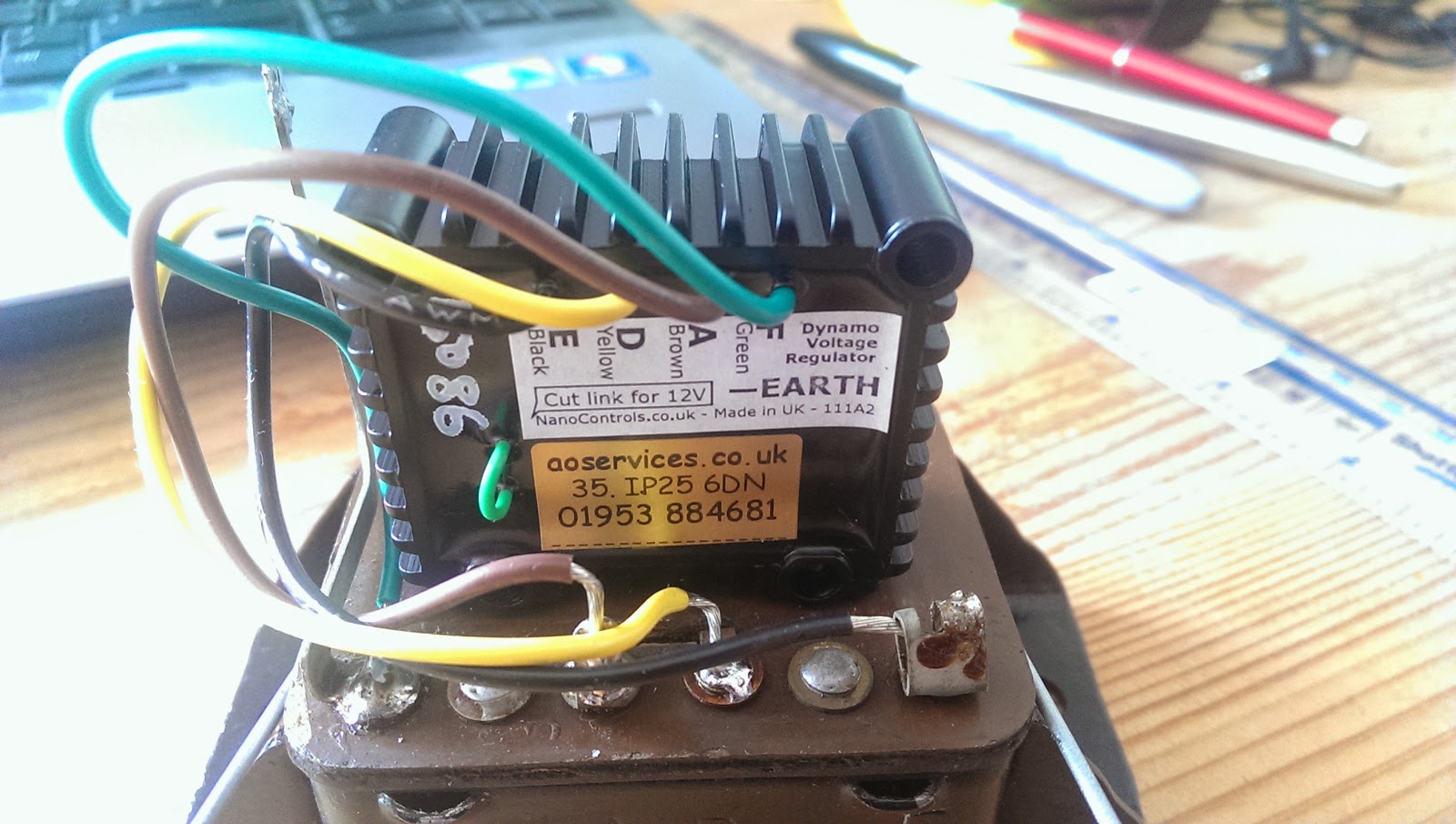 New features include: Current limit to the field winding, allows excellent performance when using a 6V dynamo on a 12V system while not straining the dynamo. Tougher electronics, with the introduction of higher energy spark suppression to reduce spikes generated by the dynamo. Improved "thermal foldback" which progressively reduces output power if the regulator gets too hot, indirectly limiting the dynamo from excessive current. Better servo loop stability, with new electronics which 'predict' when the output voltage is nearly correct and control the field current earlier.

Mine came from Paul Goff.

Taking these apart is quite straightforward. You'll need a soldering iron, a screwdriver and a spanner or two. Remove those two nuts and the screw visible in the picture, which may be sealed in with wax: 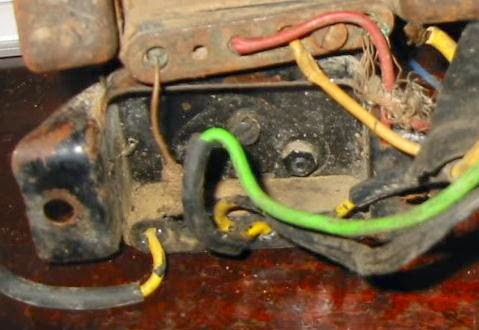 Then you can take your soldering iron, and a solder sucker, and de-solder the various joints topside. The E and A terminals need the wires de-soldering and removing; the F terminal is more easily disconnected at the frame (the top joint in the picture) and at the back (which you usefully can't see). The D terminal can be de-soldered at the copper cup around the screw from the previous picture: 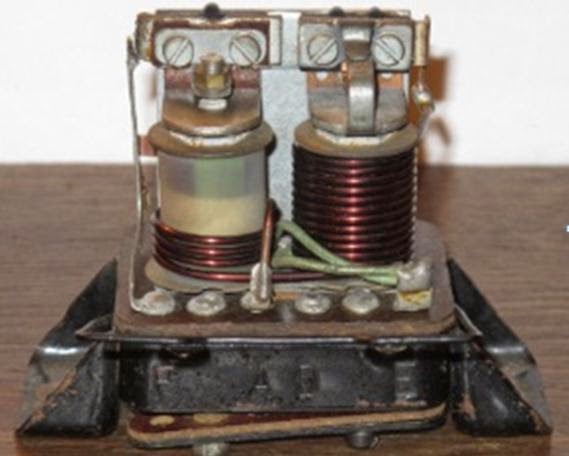 You can now remove the back plate and the armatures, and you will be left with the mounting base and the four terminals. The F terminal is staying put for the moment, since I will have to cut it off (and after that there is no going back): 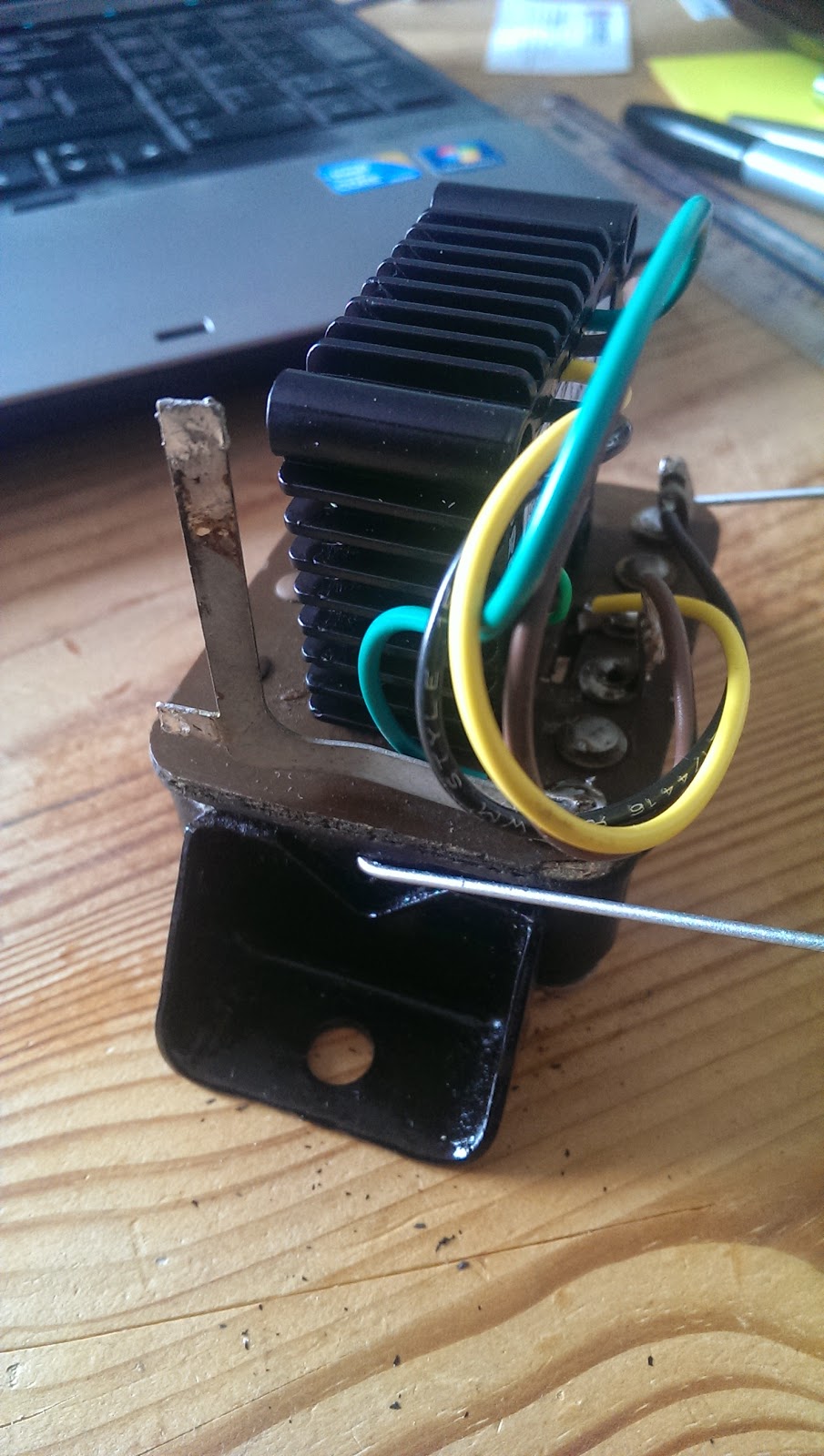 The V-Reg has a convenient pair of T-slots in the heat sink which are spaced so that the mounting bolts fit the hole spacing in the old base. The old 'D' terminal is also still in place: 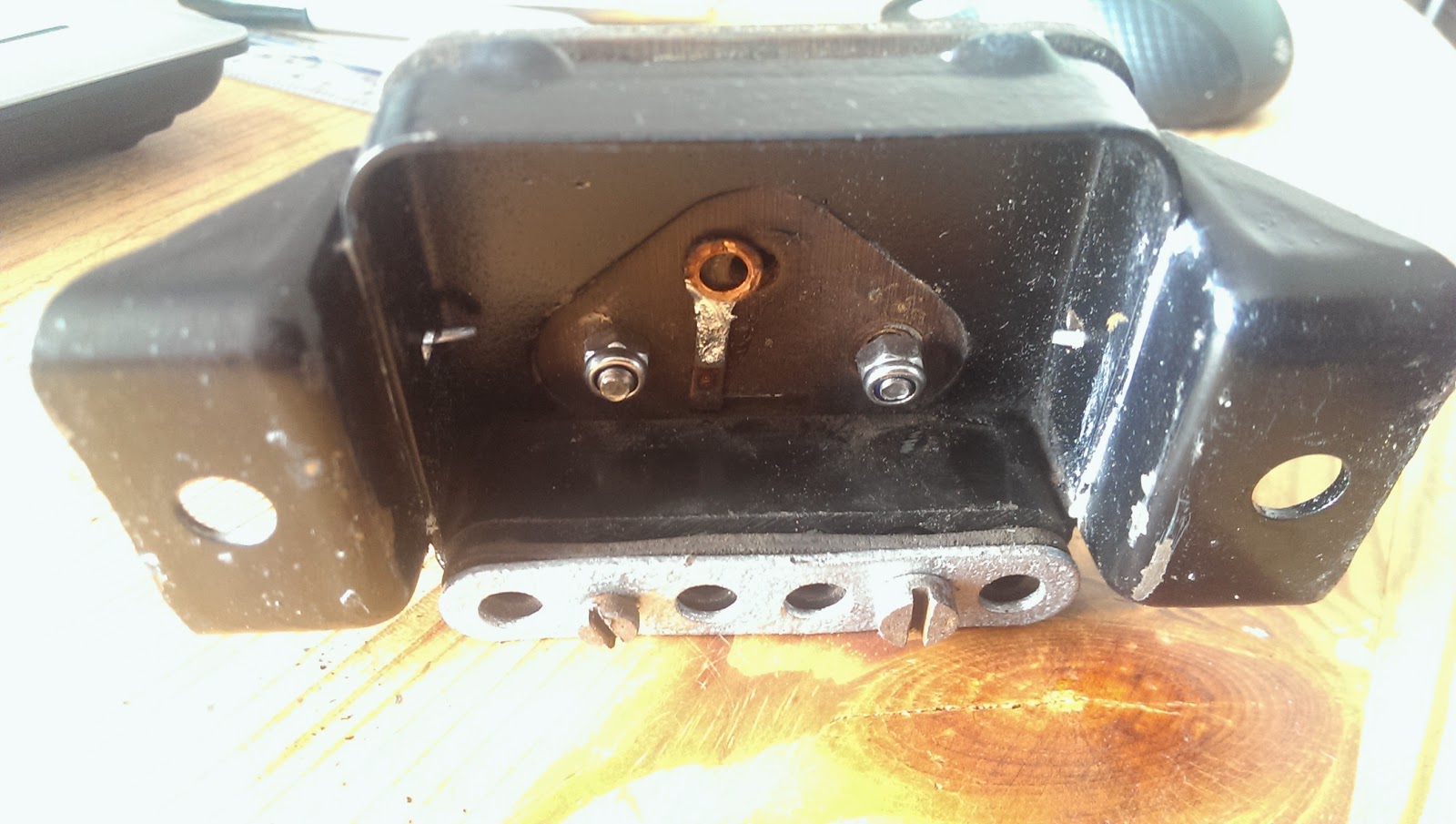 Its then a simple matter of connecting the wires to the terminals: 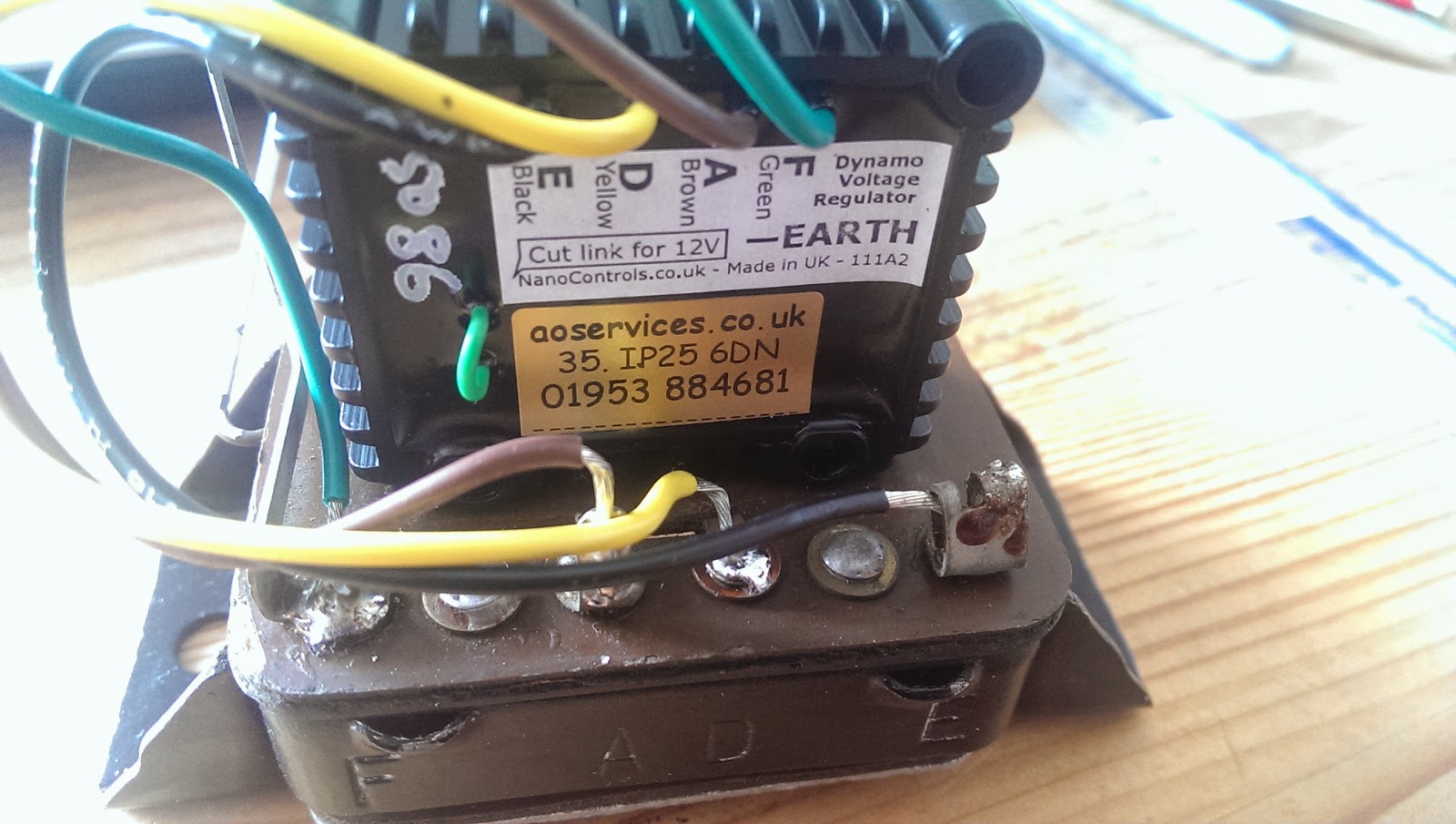 We will tidy up that wiring when we have tested it!
Posted by CharlieCeng at 17:04