Unloading your dynamo - and updating your lights

A year ago I replaced most of my bulbs with LEDs, if you remember my 'Dusky Jaunt' around Norfolk. I changed all the lamps, except the headlamp to LEDs; the headlamp became a 35W/35W halogen.

Since then I have become aware of LED headlamps in BPF packages. I got this one from Classic Dynamo & Regulator Conversions. 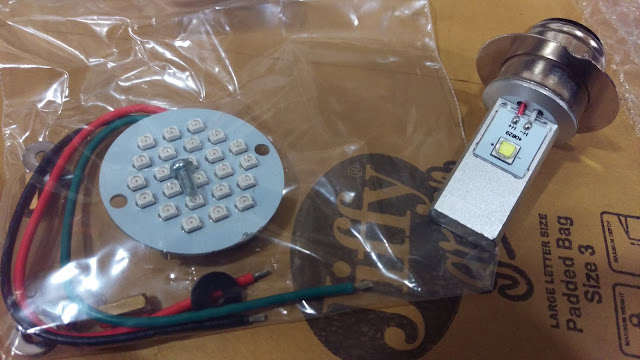 Now, as the electrical engineers among you will realise that the 35W headlamp is about half the output from my C35SD dynamo, which gives something like 70W at full output and balances charge at 40 mph with the headlamp on. The SQ4 currently runs a 6V halogen, which looks like this on the road:

You'll note the white LED in the speedo! Here's the halogen again:
Now, 35W at 6 V is about 6 A. This little chap passes 0.52 A on low beam and 1.04 A on high beam (which actually leaves both LEDs on, doubling the current and the light output) and you get:

A crisp, white light with an excellent beam pattern that will change your night time driving experience.

The result is that the ammeter hardly moves with the headlights on, and I should be able to drive around all day with the lights on.

As you can see in the picture, it is a nice robust construction and there are no filaments to blow and no fragile glass envelopes. In addition, each bulb will work on both 6v and 12v systems (one bulb suits both voltages), so if I convert to 12V at any time I don't need to change this bulb.

You can get negative and positive earth versions of these bulbs. This is how it looks on the road:

Looking at the high beam picture, you will see that the bulb is arranged to light both the low beam LED and the high beam LED when switched to high beam:
The second modification I am going to make is to replace the twin festoon lamps in the W/NGs Italianesque rear lamp with the LED lightboard I bought at the same time. 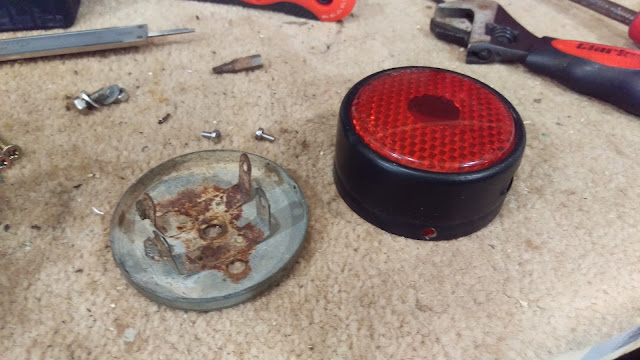