So, as I suggested in my W/NG Toolkit post, we need a tool roll and I have just the sewing machine to do it. I may have to make some curtains by way of compensation for yet another evening playing with old motorcycle stuff though...

There are few tool rolls in the Ariel parts list, as far as I can tell. They are:
The details for the kit come from AOMCC member Ray Tolman, who has provided the club with a lot of information on the tool rolls and the tools themselves.

This appears to be a 6640-26 tool roll, appearing advertised with a 1928 Colt. It's similar, but not identical to Ray's civilian tool roll - the pocket section is made from the same piece of material as the main panel (just folded over - the pockets must be tight) and I'm not convinced there is a flap: 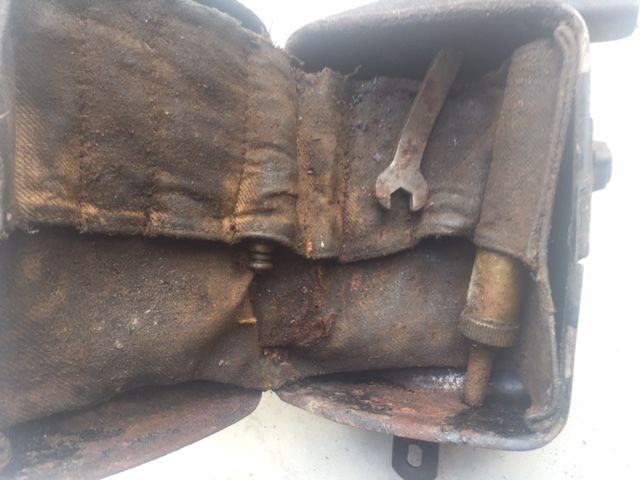 Does this have a flap?

This next one comes from Scott Williamson of Ontario, Canada. This is a tool roll from Scott's Dad's 1949 Square Four:


John Sullivan, AOMCC member from Austin Texas did a lot of research into the later tool rolls which appears in Cheval, July 2007

John's article describes the tool roll and includes dimensions such that I will be able to make a replica for my Huntmaster when it emerges from its current dormant state in a few years time. 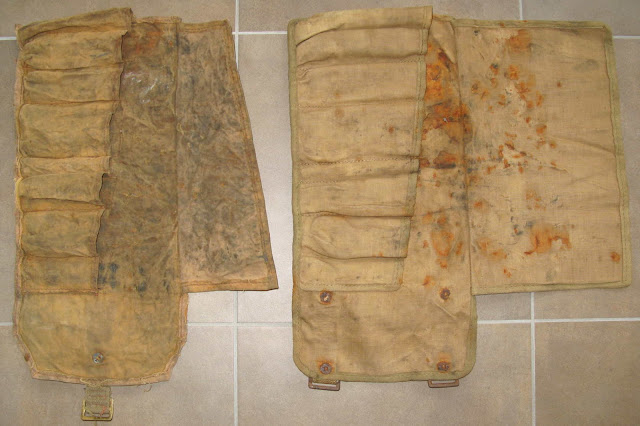 You can see that the military version is bound, has two straps, and has a much larger flap. All fabric is single thickness in both tool rolls. The military version also has deeper pockets, though the dimensions of the pockets seem to be similar otherwise.

Both tool rolls measure the same in the pockets. The big differences are:
From this next picture, we can calculate the length of the pocket piece and make a pattern. We'll need to think about how much that tool roll has stretched over the years:

This close up shows the stitching on the pockets:

Stitching appears to follow this routing. There are two runs of stitching in the centre and between pockets 6 and 7, strengthening the larger pockets. Arrows indicate the direction of stitching: 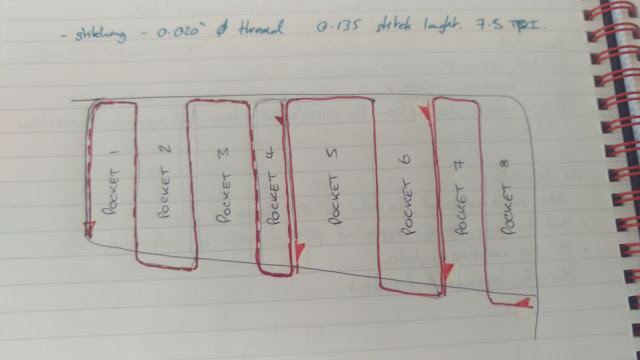 This shot shows the strap length and the location of the rivets: 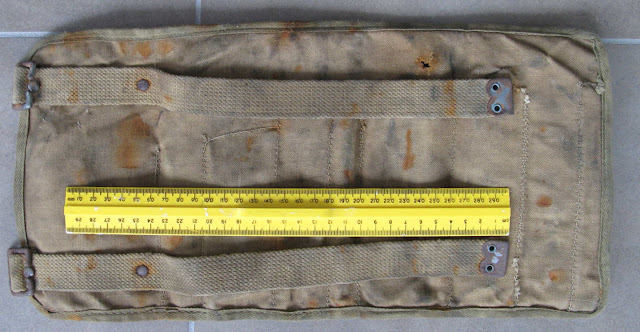 Here's the inner flap. Note also the washers around the rivet legs: 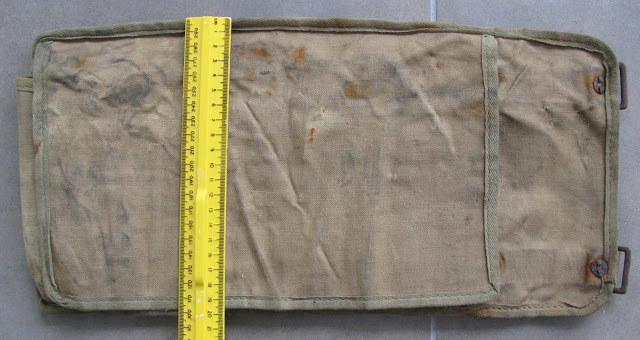 Ray tells me the civilian roll weighs 141 g and the military one 199 g; this could be down to the single/double straps as much. I guess, as the weight of the fabric. A strap weighs about 35 g.

These are some close up views of the original tool roll Ray sent me. 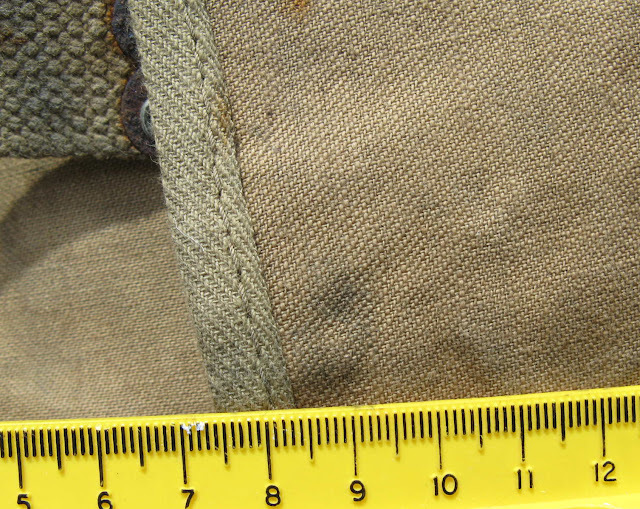 There are 55 threads to the inch in this canvas: 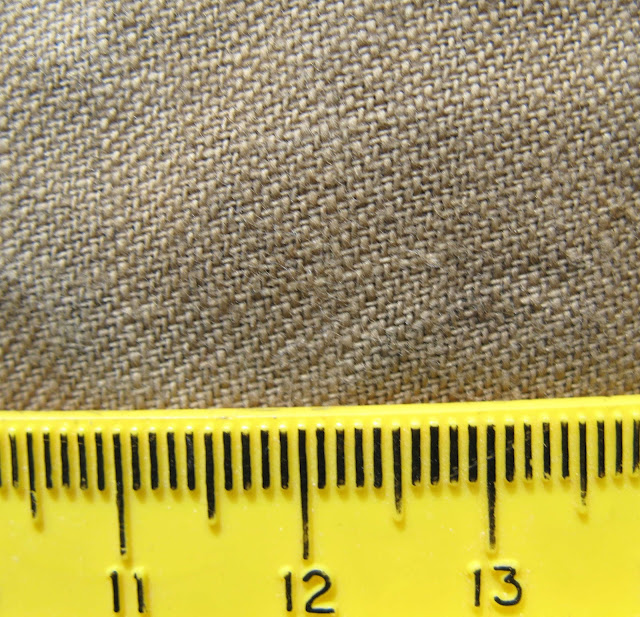 This is what I am thinking of using: 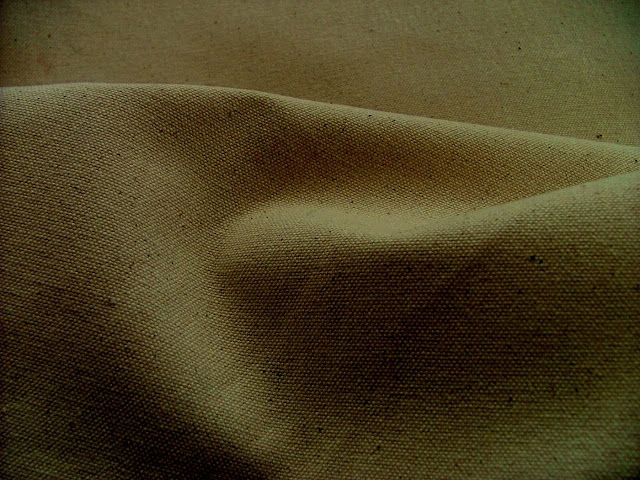 Here is a binding I'm considering. It's a standard 16 mm bias bind tape: 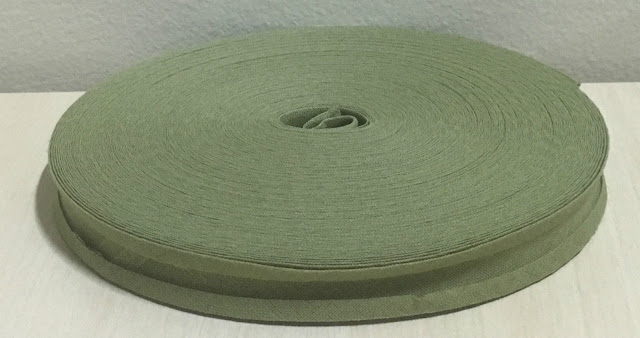 Looking at this picture, its probably too narrow at about 1/4": 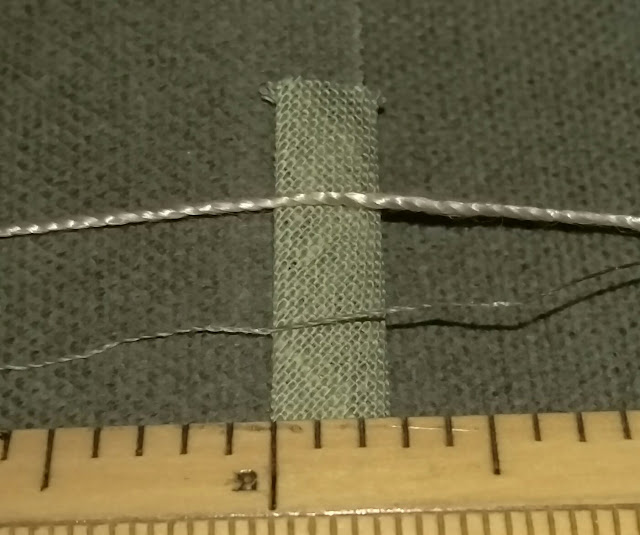 This is an alternative. It's a 20 mm cotton twill tape, folded in two. The texture is much more appropriate and it is a bit less green: 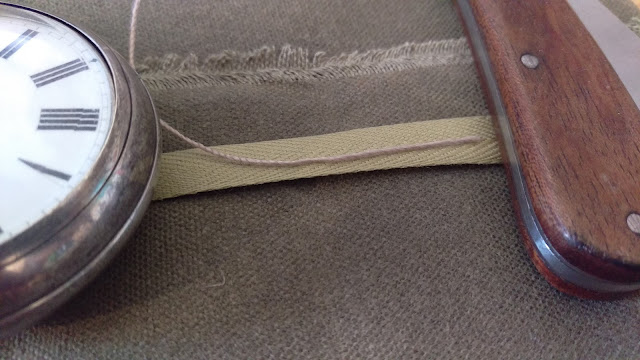 When folder, this will show about 9-10 mm each side, which is much more like Ray's example here: 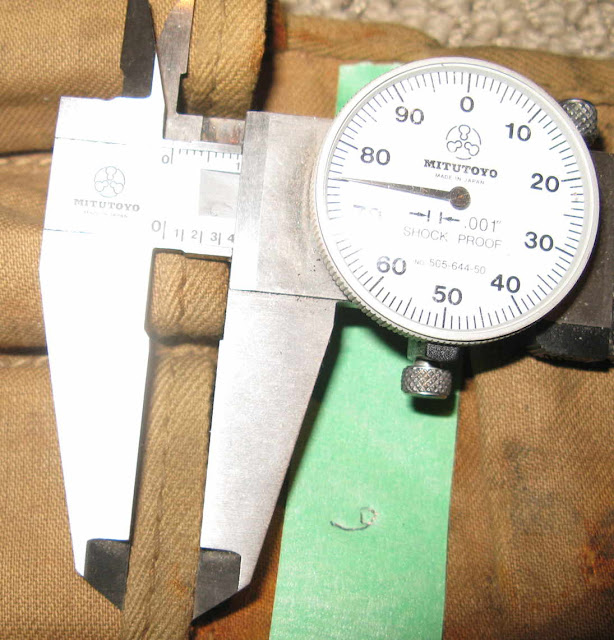 Ray drew my attention to the thread, which is very thick button thread. I'm planning to use this beige gimping cord: 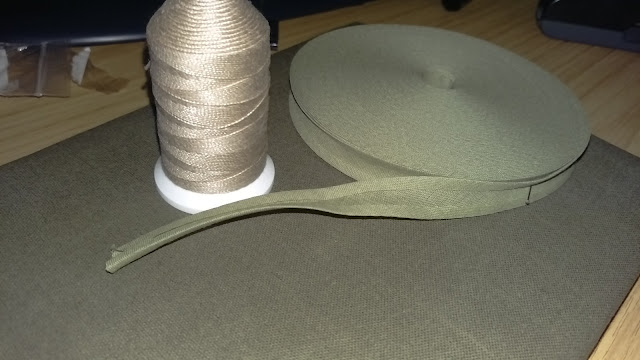 The original kit Ray showed me uses the standard 1908/1937 pattern webbing straps, with steel buckles. These are quite easy to find, but usually have brass buckles. 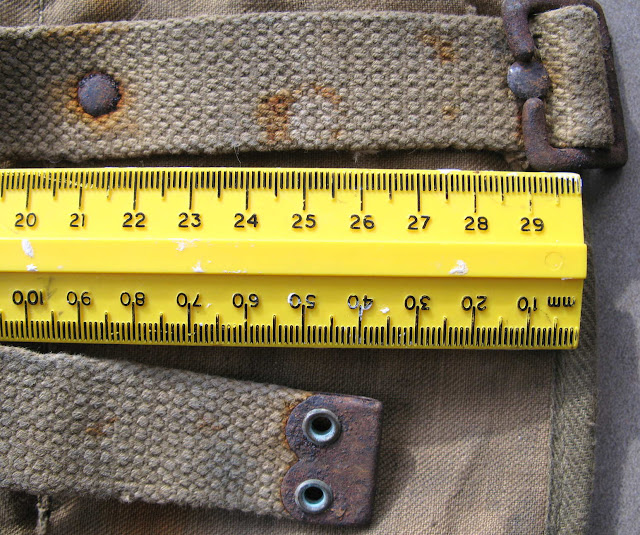 This civilian example does have brass buckles:

Note that the position of the strap, and the single rivet, are quite different to the military one. This is one of the straps I will use: 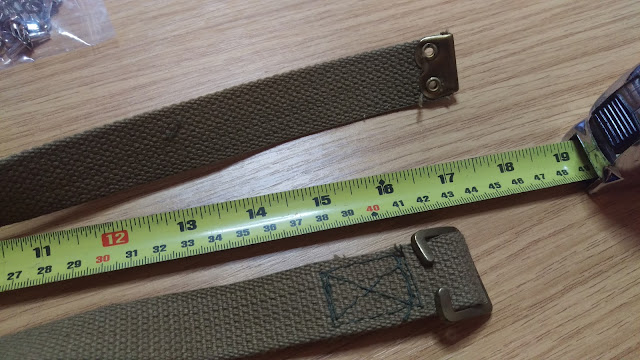 Its 17 1/2" long by 1" wide; the originals are 13 1/2" long. We can easily shorten that and lose the box/cross stitching behind the buckle - the original appears to use the rivet to retain the buckle loop.

We will have to find suitable bifurcated rivets. I have these: 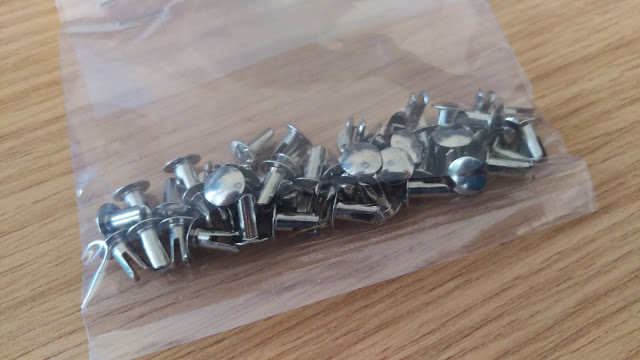 They  have a raised round head which is 0.030" diameter, just like Ray's original; They are plated, not plain steel blackened; I will probably paint them with matt black acrylic. They are over-length at 0.325"; the originals are 0.250", but I can shorten the legs. They are clenched with this tool I made: 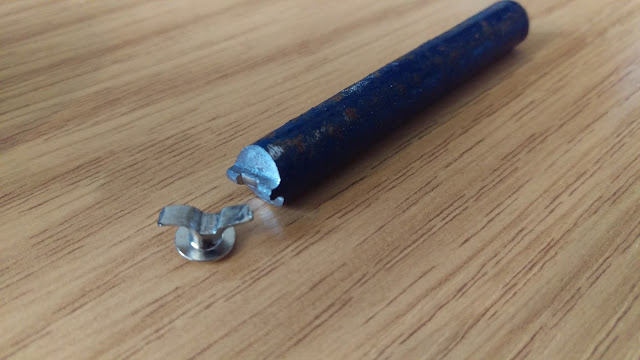 The notch on the middle is to allow the tool to carry on pushing the legs down, clenching the rivet, without the tongue in the middle bottoming out on the bottom of the slot. It will need case hardening before it's ready to do many rivets.

I'll get some washers to fit.

These are the patterns for the military roll, cut from thin card. The holes are to enable me to mark the fabric with chalk at critical points:

So, after cutting the patterns it took an hour and a half to make the prototype, following the sequence in the pictures.

Starting the stitching, it was obvious that the gimping thread was way to thick for the needle & for the sewing machine. I reverted to an earlier option: 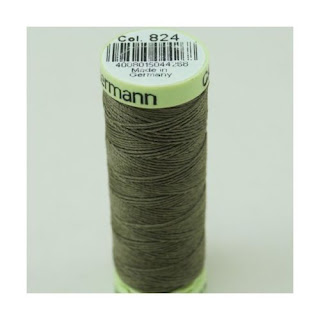 This worked fine in the machine - it would, it is a standard polyester dressmaking thread. It just doesn't look the part:


In these two pictures you can see the blue chalk marks I used to align the pockets. These were made through the holes I punched in the patterns.
The pockets feel very tight.


I'd not planned how I was going to get around the flap with the binding, in that top left hand corner. I've fitted the flap too far to the left: 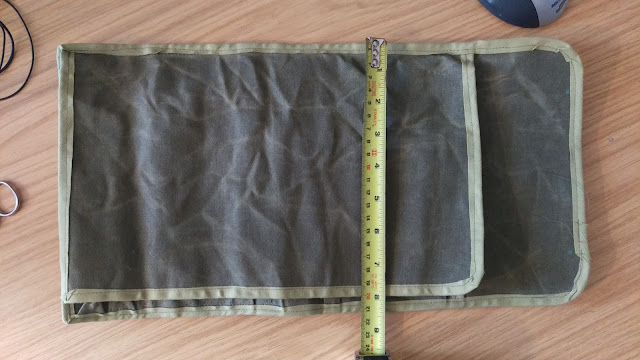 The binding around the corners is very untidy. I tried not too be too dainty with the sewing, recognizing that the original sewing is not very neat in places; this is a wartime tool roll, not your daughters wedding dress:

Now here is the roll with most of the tool kit in it: 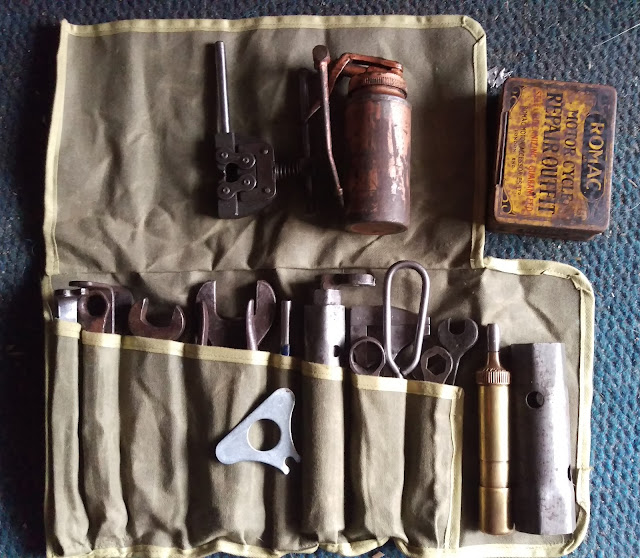 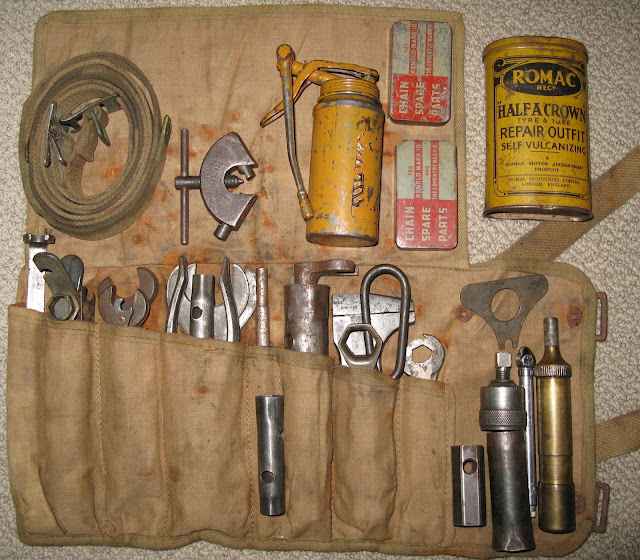 Issues with the Prototype

I've a few thoughts about the development of the prototype:

I've made a second prototype to address some of the issues. Pulling the first one apart, its aparent that with one wash it has shrunk about 5%. Look how the fabric is smaller than the pattern it was made from, most noticeably on the pocket length: 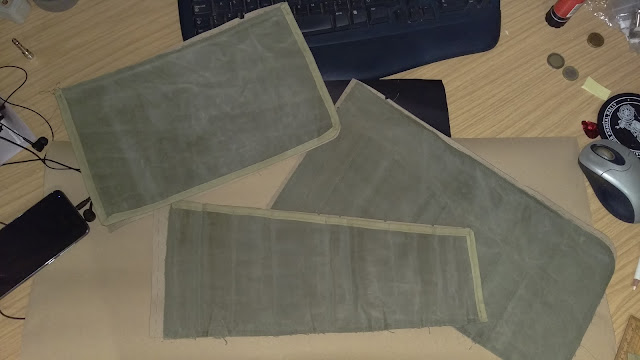 The second prototype is about 7-10% bigger than the first, and I made a better job of the corners. I re-positioned the flap, and I bought some thicker linen thread  which is still too thick for the machine. The pockets are each 1/8" wider than before. The only part I re-used was the main panel binding, which I used on the flap; everything else was scrap - but I can make a new pockets piece from the old main panel. Here is the new one, full of tools:

You'll notice in that previous picture the straps are not fitted. I've case hardened the rivet punch, so now I can fit the straps:

Some of the rivets clench OK, but actually the angle of the faces of the rivet punch needs to be reduced, so that it splits the legs more easily.

And that's it, one finished tool roll: 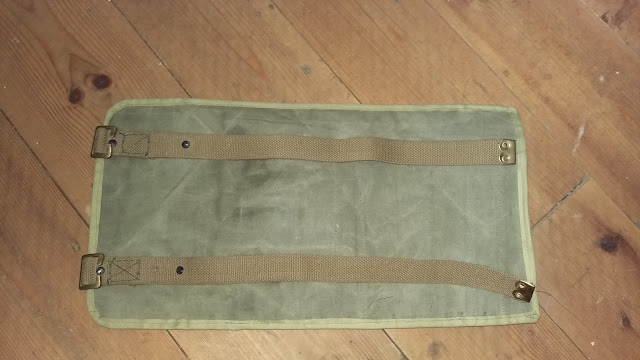 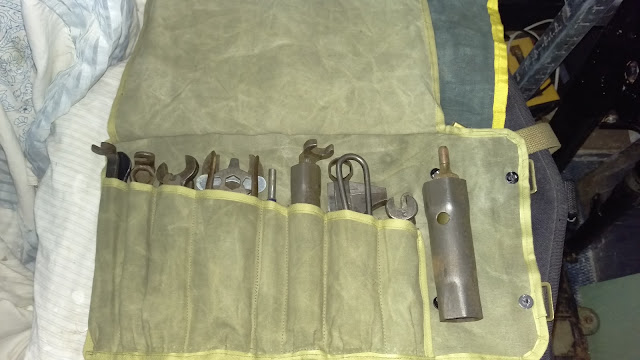 Both the new tool rolls together. The military one is much nicer: 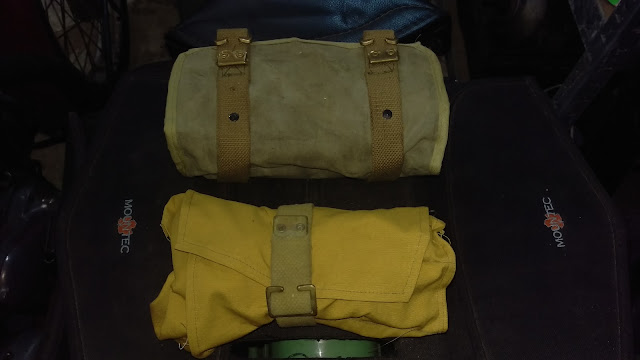 Here are a few links to my other toolkit pages: