Overcast and chilly but dry, and recovering from a couple of days with the grandchildren, today came another opportunity to give the SQ4 another test run after the summer oil leaks and HT problems which were eventually traced to be the cause of a persistent and long term misfire. Although the cold weather might be masking a hot weather running problem, the bike is running better than it ever has.

Preparing for the trip, I noticed the oil level was lower than expected, though a few minutes idling had it a little closer to normal. I topped it up, and resolved to look at it again when I got back. 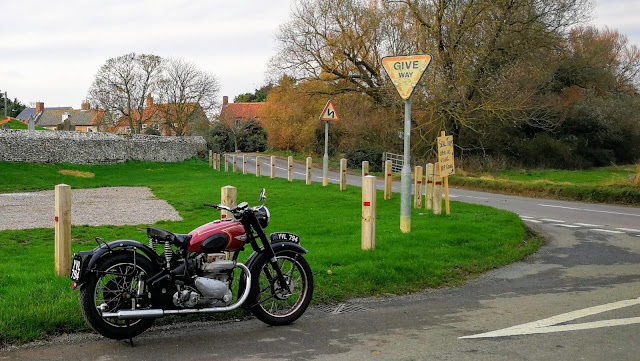 A 27 mile around North Norfolk had me grinning from ear to ear as usual, though I thought the handling was a little uncertain; the brakes appear to be bedding in, the chain needs adjusting and the lower chain guard is clanking as usual. 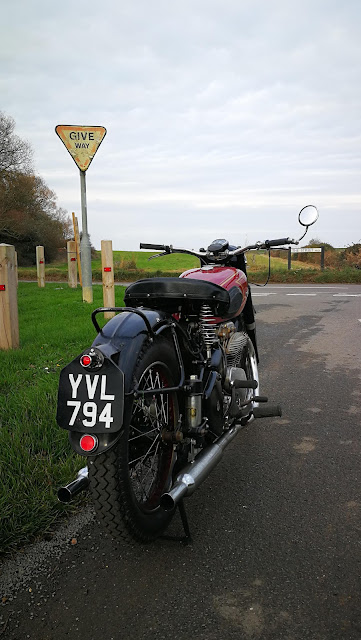 Back in the workshop (after collecting the pear & ginger cake from the excellent Picnic Fayre in Cley), I set about adjusting the chain and rear brake. Since I was adjusting the chain, I removed the wheel to take off the chainguard - more on that in another post. I moved the chain back half a turn and lubricated it; I adjusted the brake up 3/8 of a turn and put an 1/8 of a turn on the front as well. The primary chain looked OK, and the oil level was good. I checked and nipped up all the spokes on the rear wheel.

Turning my attention to the engine, I had a good look around underneath. There was quite a leak coming from somewhere judging by the clean oil 'trails', possibly:


Essentially, there were too many possibilities to narrow it down. I tightened the oil feeds, the sump plate and plug, the crankshaft bearing cover and the timing cover but essentially none of them needed attention.

The front main bearing cover has a peculiar copper/asbestos gasket which looks more like an exhaust ring gasket and I suspect is wrongly installed. It's not the gasket I would have chosen for that application.

More later.
Posted by CharlieCeng at 22:48