My ER40 collet chuck needs two tools to operate it - the 'E spanner' to operate the castellated locking ring and a 15" adjustable to hold the flats at the rear, which are 46 mm AF. 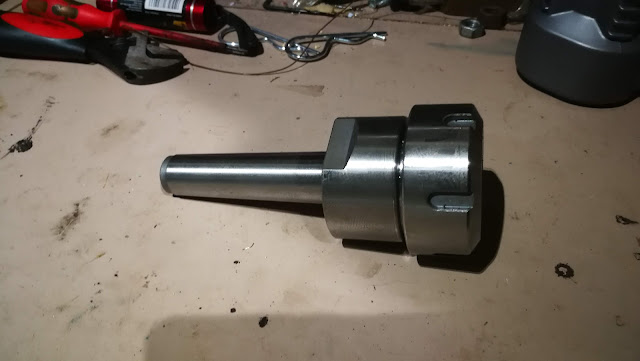 I don't have a 15" adjustable. Well I do, but it's a 1940's style spanner and is much too thick to go between the chuck and the lathe spindle backplate. I could buy one, but a decent one is at least £25 and car boot sale season is a way off yet. So what about buying a large open spanner? Could do that too, but where is the fun in that?

We'll start with some 25 mm x 6 mm flat bar, and chop up three bits with a cutting disc. In the same operation, we'll round the end of one piece.

When Brokkr's fires have died to a mere smoulder, and I can pick up the parts without burning my fingers, we have this: 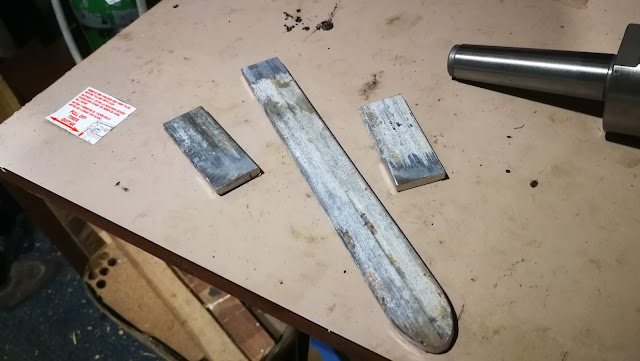 These three parts will make up the handle and the two jaws of the spanner. You could cut this from 1/4" plate, but you would waste a lot of material. This is one of those production engineering decisions which pan out differently according to your needs - I am happy to spend a couple of hours fabricating this and using some scrap bar (actually a threshold plate that I robbed from a skip) rather than use most of my stock of 1/4" plate.

So, I've laid it out on a large bar magnet to plan the shape: 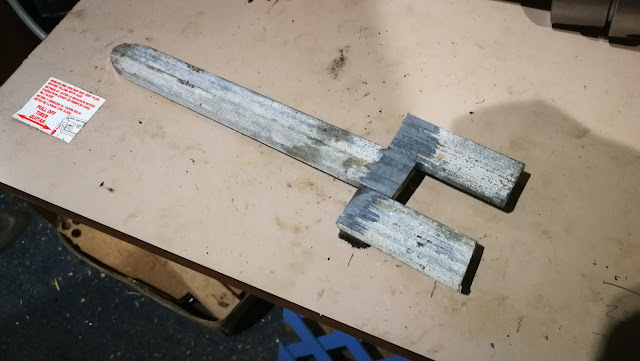 Holding the collet chuck in the vice, I've sketch around it to come up with this. At this stage, the aperture is drawn to about 40 mm - we will trim it to size when it is all together. 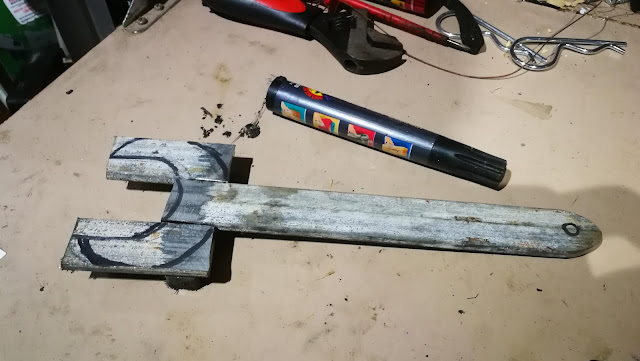 You'll appreciate that it is much easier to cut the shape into these jaws with them loose. I've used a cutting disc, a saw, the grinding wheel and a belt sander to get to this stage: 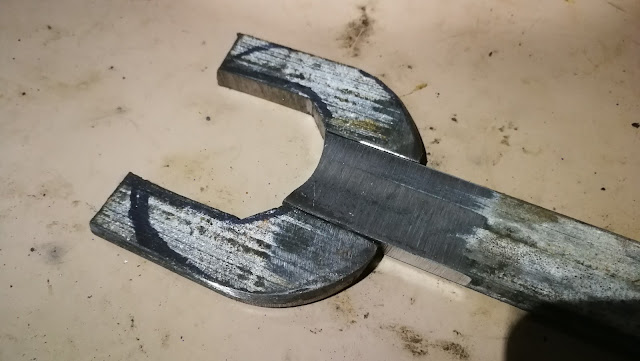 This is ready to weld. The original bar is galvanised - most of this has been sanded off as it will burn, contaminate the weld and poison the operator. 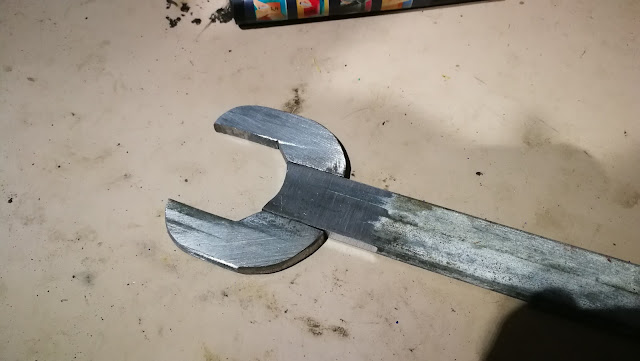 Setting up for tacking. The handle is in the vice; a piece of scrap is clamped to the handle, and the two jaws are clamped to the scrap. You'll notice there is now an 8 mm hole for hanging the spanner up. The job is set up so I can rest my wrist on the vice: 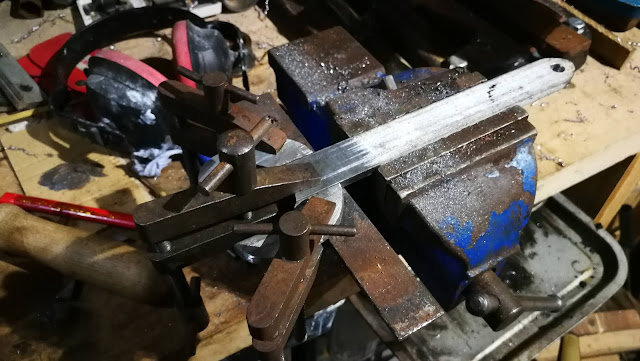 I've used the TIG set to weld the jaws to the handle with a 2.5 mm tungsten ground to 90 degrees, a #4 shroud and Argon at 5 l/min. The welder was set to 60A DC. I made about half the weld on one side, removed all the clamps flipped the spanner in the vice and made the whole weld on the other side, then flipped it back and finished the first side. Then I made the short welds at each end of the joint. All joints were closely prepared with no gaps and welding was entirely autogenous - no filler rod was used. 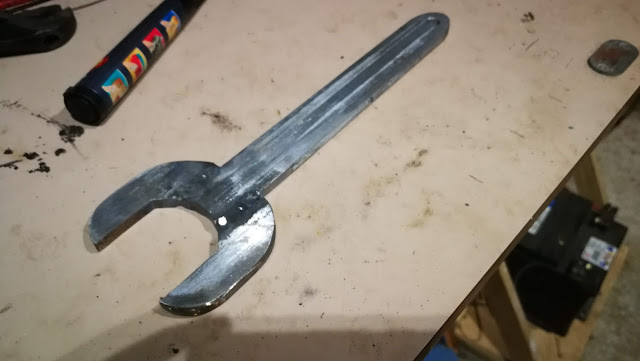 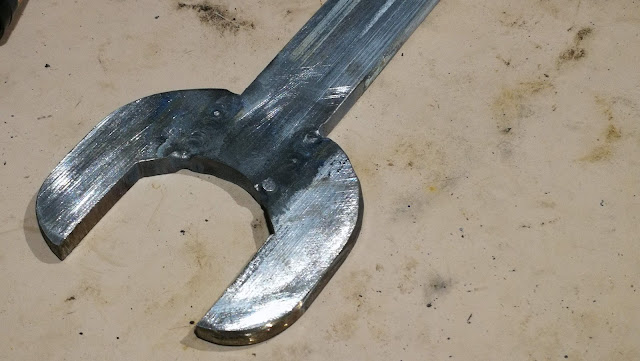 I'll use some U-Pol etch primer on it now, to prevent rusting. 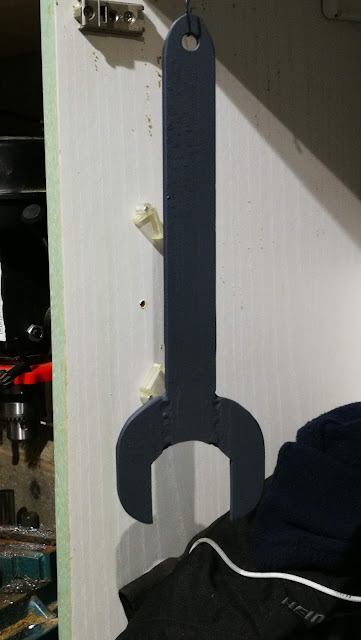 Next job is a festival of filing and grinding, checking very frequently against the collet to come up with a good fit. I could improve that curve some more, but it is pointless... 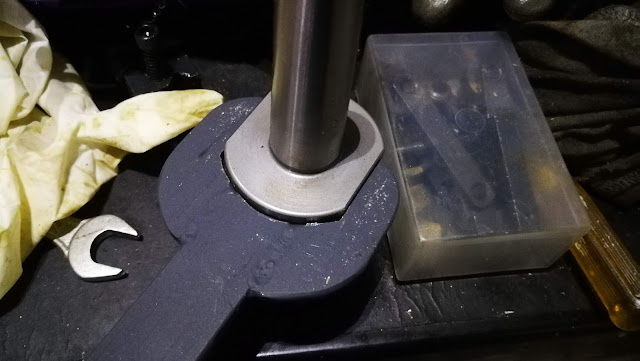 I found this green at the back of the shelf. It's old, it's revolting, but it's free. 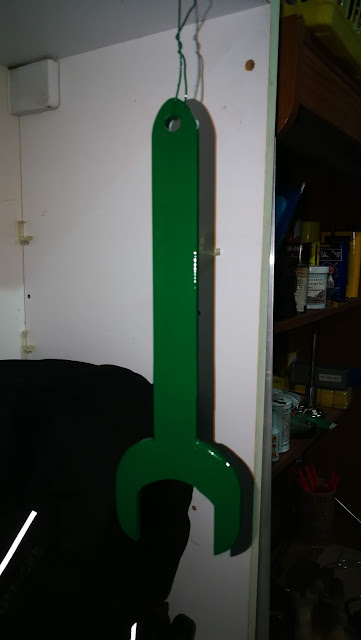 I hope you like it.
Posted by CharlieCeng at 18:50