Since I've had my W/NG, I've been suspicious of the fact that it is (or was) little faster than my Bantam, struggling to reach 50 mph without a wind behind it.

So, I was interested in a thread on the AOMCC forum on the subject, in which fellow W/NG rider Alan Moore wrote:

"Calculating the required ratio to give 1600 revolutions per mile traveled by the front tyre (with the 43T/14T hub gears) results in a required gearbox ratio of 8:12 (it reduces the input turns by that ratio). So the input pinion has 8 teeth and the output pinion 12. So my 8:14 ratio is a little bit out and gives 1400 revs per mile which means the speedo would under read by about 12%"

I'd been out for a 56 mile run (Google maps) and recorded only 49.6 on the odometer. Watching the town speed warnings (the ones that flash your speed up) it appeared that the speedo under reads by about 12%, so I was immediately suspicious that my speedo gearbox gearing was wrong too. The fact that both speed and distance readings were out proved that this was not a speedo head calibration problem - which would have been a surprise, as the speedo head was shown to be very accurate when it was rebuilt.

It took me a long while (and quite a lot of money) to find a speedo gearbox with the right ratio. I'm hoping to be able to recoup the cost by selling the old one.

So onto fitting it. I'm always happy at the way these old bikes facilitate maintenance - it's so easy to pull the front wheel out with the bike on the front stand. Here's the speedo gearbox: 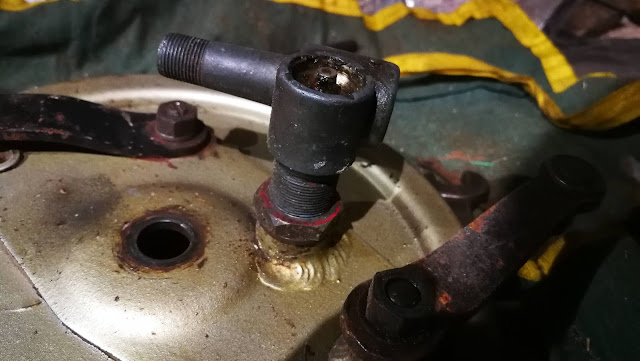 And here's the small pinion inside the brake plate. You have to remove the split pin and the pinion to get the gearbox off: 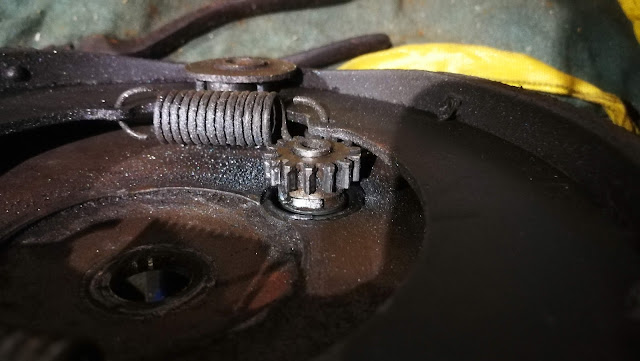 There's a bit of debris here, and some damage on the small pinion. I'm not sure the two internal pinions are mating properly. 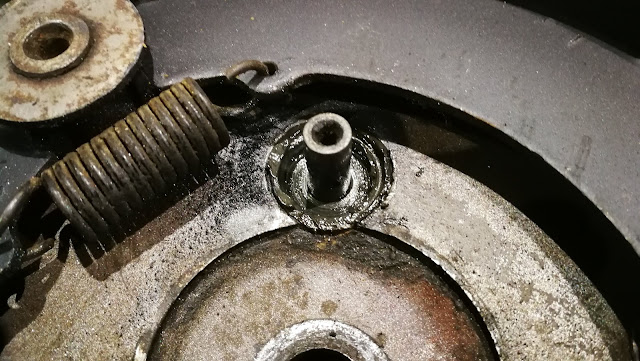 Once you have undone the large locknut, you can unscrew the speedo gearbox. You'll see this split pin underneath the driven gear - remove the split pin and you can tap out the gear using a drift. It will drive out the cap: 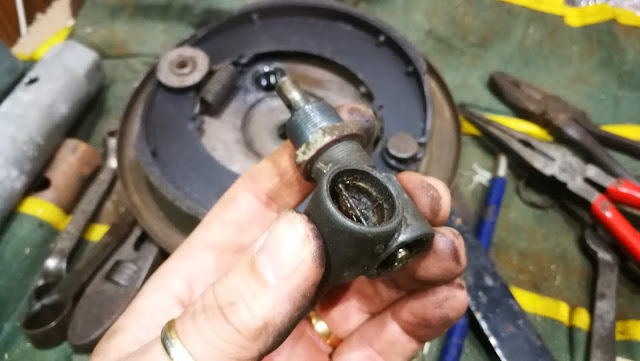 The cap with the grease nipple is staked in, but will come out if you gently tap the driving pinion. You can now inspect all the components, clean and grease them before reassembly using a new split pin. 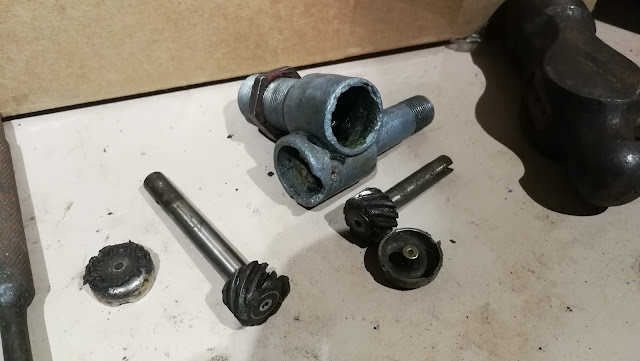 By the way, this is a different gearbox. Not my damage!
Posted by CharlieCeng at 20:55