I've had a few nervous moments in SQ4 ownership, shared by several co-owners if the stories on the AOMCC forum are anything to go by. Not least of these are the few occasions where oil pressure has suddenly and completely disappeared, accompanied by a more or less continuous return flow to the oil tank.

Fortunately, the first time this happened was on start up - or at least, that's when I noticed it. Investigation was interesting - removing the front main bearing cover to look at the oil pressure relief valve revealed that the spring had become caught in the split pin, and the split pin was now part way down the spring, preventing the spring exerting any pressure on the ball and allowing to come off it's seat.

I put it back, noting that the direction the spring was wound in would always allow that to happen and wondered if original springs are would in the opposite direction.

It happened twice more - once outside a smoke house along the coast. Knowing what it was, it was any easy fix if a little nerve racking - everything was rather hot, and I was nervous of losing small parts in the dirt. However, I was buoyed up by another motorcyclist stopping to see if I was OK.

The next morning, the same thing happened - very low, but not zero, oil pressure on start up. It had happened again. 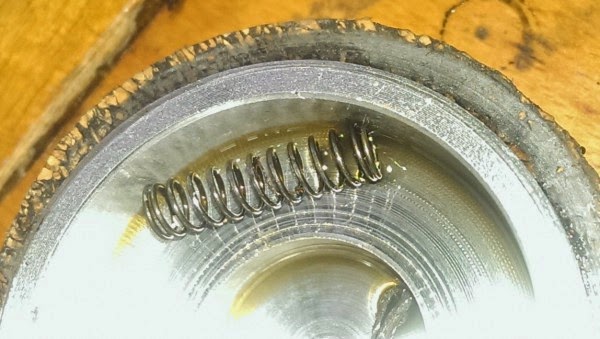 I planned to make a brass cap to house the end of the spring, preventing the split pin from coming into contact with the coils.

However, I came across this cable ferrule which fitted beautifully. all I have done with it is to drill it out to 3.5 and use a needle file to open it a little more - all the relieved oil has to pass through this hole: 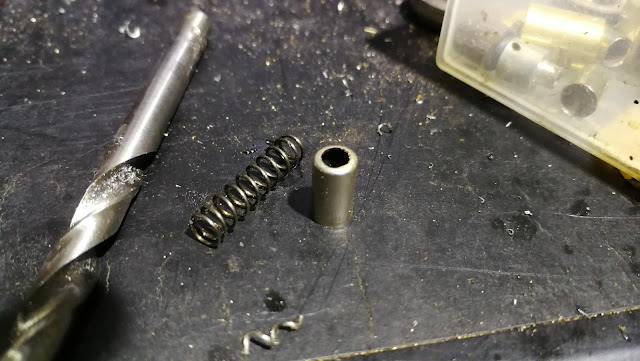 This works perfectly, and makes it much easier to get the split pin in.
Posted by CharlieCeng at 09:33