Registering an old machine that has lost it's V5C, or which has been out of use since the DVLA computer system started in the 1970's is a pretty straightforward process and involves either one of the one-make clubs or the VMCC. The DVLA, upon payment of a small fee will issue a registration number to a bike providing it's frame and engine numbers can be shown to be legitimate to that make and model, usually by consultation of the original factory records.

Once the club has located a machine in the record, usually by frame number, they ask a member to witness the number by visiting the owner of the machine and verifying that the number is or appears to be original to that machine - i.e. that the number is correct to the factory record and that it has not been stamped by an unscrupulous villain trying to pass an A10 Gold Flash off as a Rocket Gold Star.

The VMCC maintains a register of these 'Machine Examiners' and they are asked to go and witness candidates for re-registration local to them - there are a network of Machine Examiners all over the country.

Today, it was my pleasure to visit Tony to check the numbers on his 1929 Scott TT Replica: 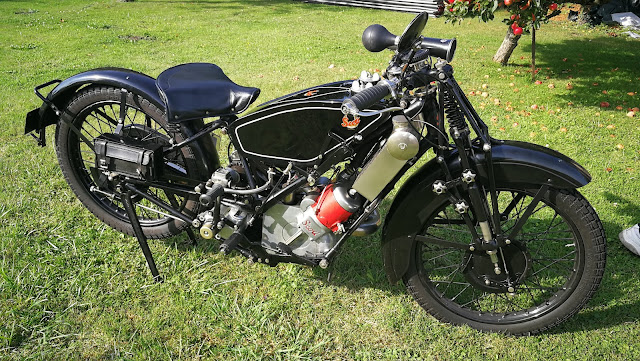 Of course, this is really an opportunity to go and have a natter with like minded folk and look at some wonderful machinery. I've not had a chance to have a proper look at a Scott before, other than in a museum. Tony know's his Scotts and a good few other vintage machines as well, and he showed me around the various interesting design details these wonderful machines are endowed with.

Then he started it up... I don't know what I expected, but it wasn't a 90 year old bike that sounded like a '70's Yamaha. I didn't video Tony's bike, but these are two examples from YouTube that give you an idea:

Thanks Tony. I didn't see what all the fuss was about with Scotts before today, but now I am hooked. I can see why you look so happy. 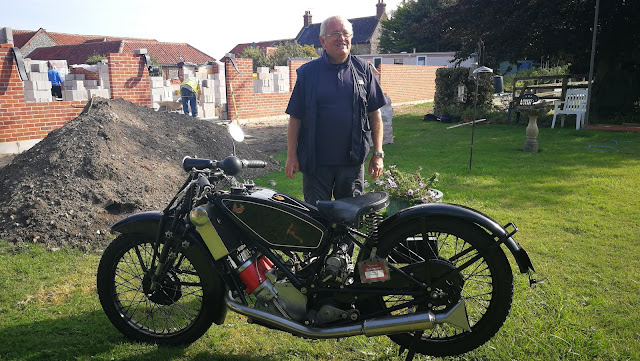