Well here we are again, Christmas break and a bit more time. We've had Amelia for two years now, not long by Square Four restoration standards. Various diversions have come & gone, some are still here. I've had three months off work (diverted by a house renovation and a long hot summer, plus a daughter off to university), come back to a major project for Statoil, and I've been asked to write a book. A bike book!

But back to Amelia. Various thing are in the wings - we are working on the engine (long wait for piston rings; still not out of the woods)  sorting out the coil mounting, and finishing the dynamo. The dynamo is key because I understand that you cannot fit the end cover with the primary cases in place, and of course you need the dynamo to set up the valve timing, so I want to have it available before I finish the top end.

So, we had an old post on the dynamo, where we discovered it was intact electrically, but the bearings were shot and it was full of oil due to the failure of the oil seal. So the first job, which I did a few weeks ago, was to obtain the parts from Draganfly. After that, it was time to clear the bench and pull it apart again.

The bearing has to come out first: 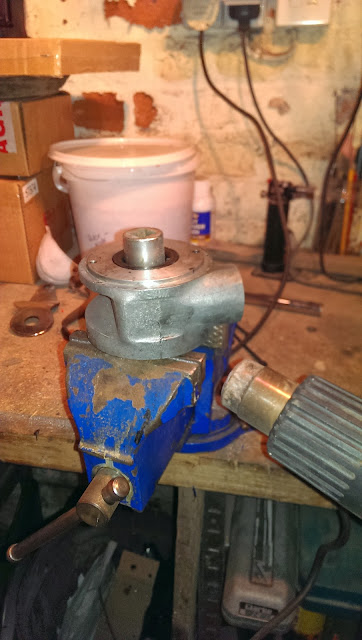 Very easy with the heat gun and a large socket, though you have to bear on the inner race which is not ideal, but these are not a tight fit. 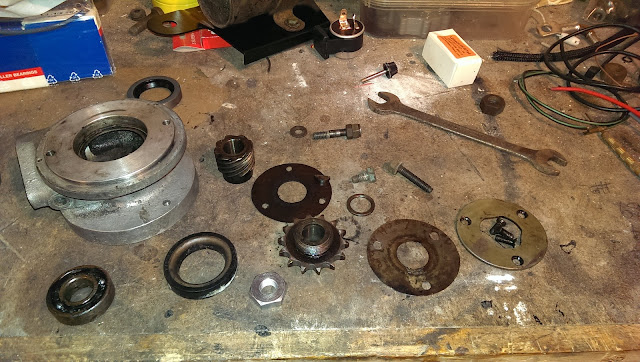 This is the drive end in pieces, with a replacement nut, oil seal and bearings from Draganfly. Those parts, looking like a shim and a gasket (because they are a shim and a gasket) are not original. They are (quite proficiently) home made and do not appear in the Lucas workshop instructions for the C35SD. 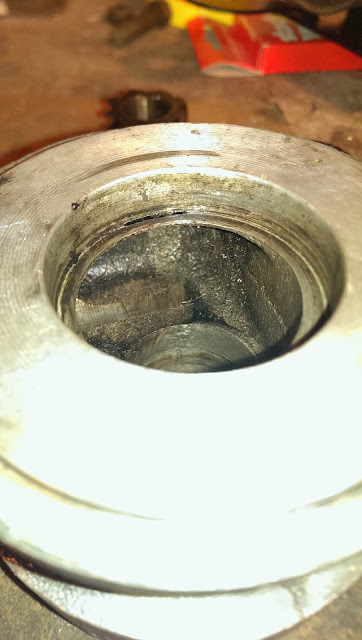 The bearing shoulder is very thin, and through in one place. So much for Lucas QC. Next stop, the commutator end - and as before the armature is a tight fit in the bearing. Lucas usefully provided a tapped hole, where you can use one of the long screws to push the armature out of the bearing: 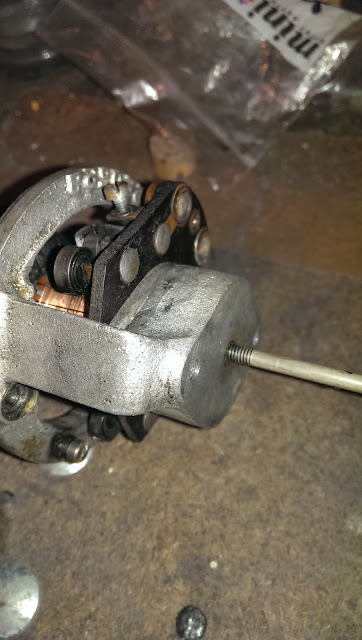 So, commutator end in pieces. A proper clean ensues with white spirit to remove all the grease, plus wire brushes and wire wool to reveal a lovely plated surface on the body. Actually, there is no means of removing the commutator end bearing unless you have an expanding bearing extractor (which I don't), but luckily enough, with a bit of heat and some sharp taps on the vice, the old bearing dropped out. 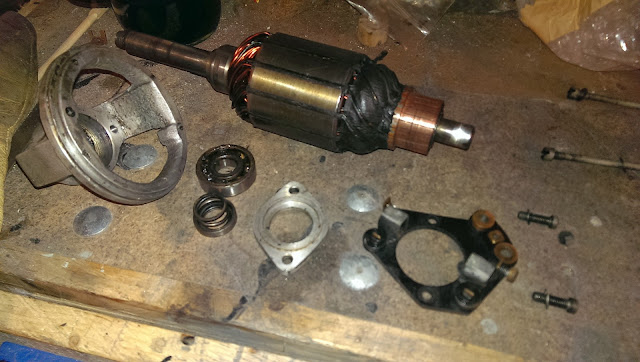 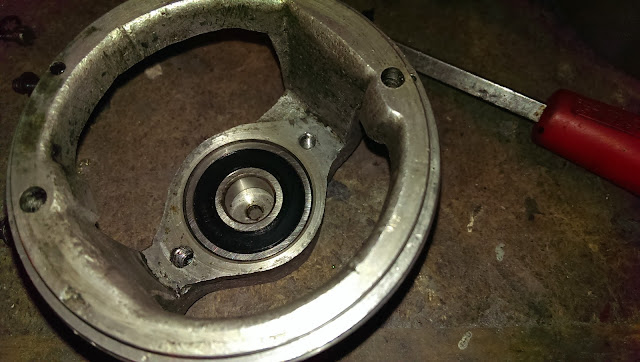 Then, on to reassembly. Drive end in place with new bearing and seal: 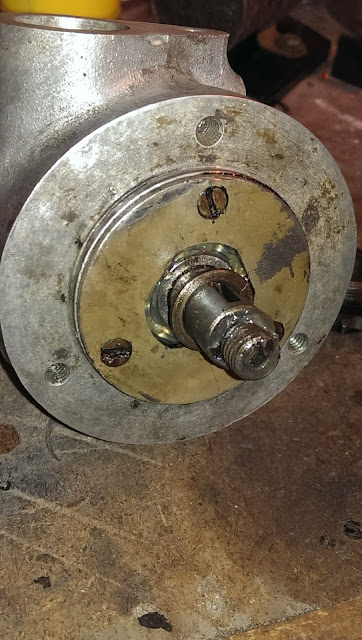 Clean commutator (those deep scores won't do any harm) with its spring and thrust bearing. This is an early CS35D - later ones used on Mk2 SQ4s have a different arrangement here: 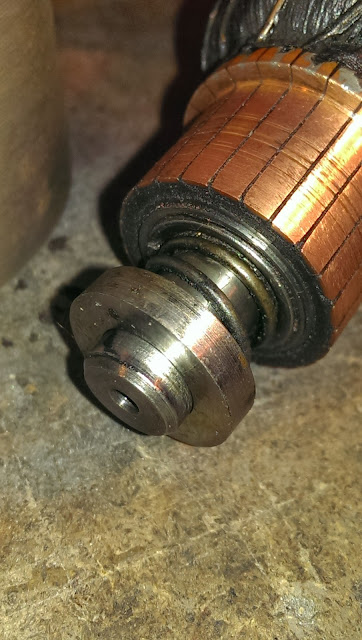 New brushes dropped in and springs hooked back over them: 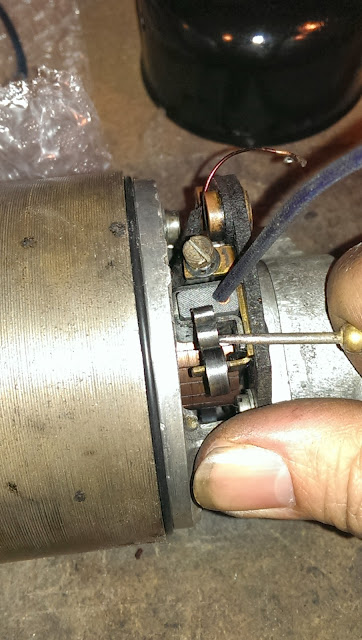 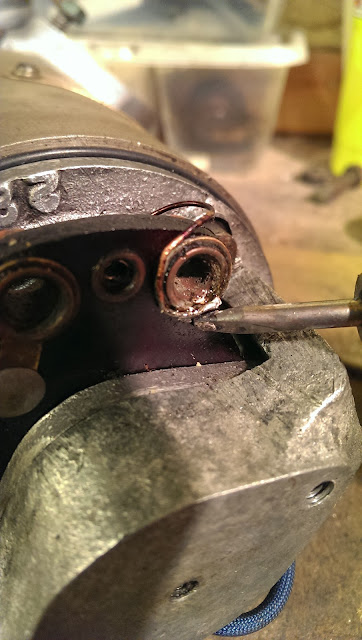 And the end cap refitted with some grommets (plus a new O ring around the body, visible in the picture during brush fitting), new screws & fibre washers. By the way, this end cap is the original and was always black: 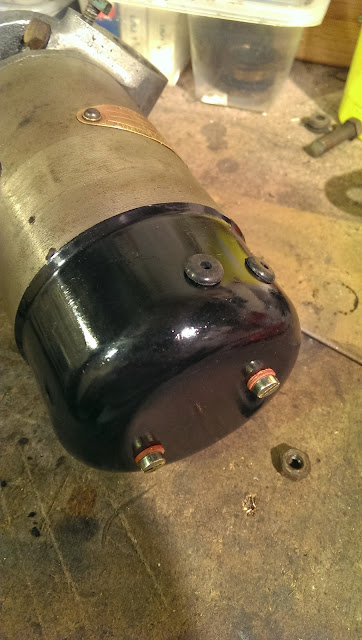 And here is the drive end: 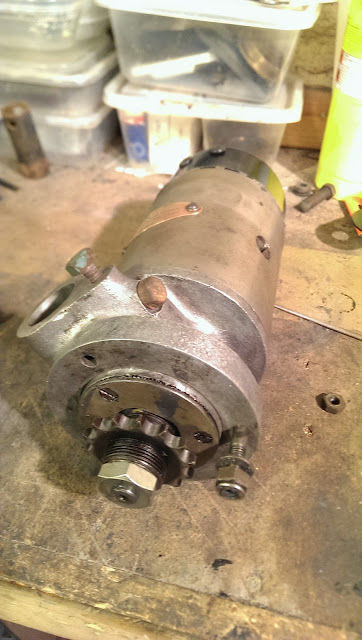