Special tools, those that are devised to make some unusual job that bit easier, come in all shapes and sizes.  Having no desire to pull the Square Four forks apart again (since I have the Huntmaster ones to do) I decided to see if the recalcitrant forks bushes would free themselves with a little brute force, tempered with at least a little intellect.

The front mudguard is a serious piece of engineering (especially with all the welding wire I added to it) and it can take a bit of force. I devised a tool made from a block of 3/4" ply to spread a load into the mudguard: 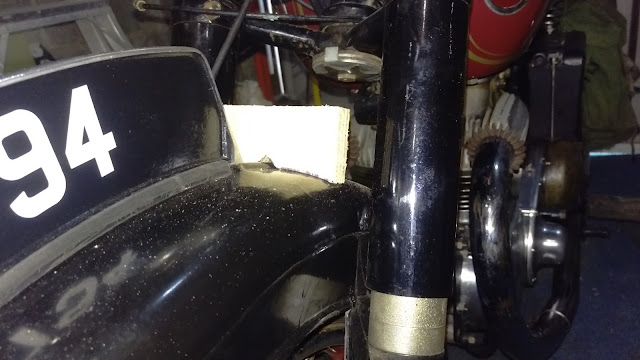 Five minutes with a stout bit of bar saw the fork stanchions pop out of the sliders. Hopefully the next time I hit that pot hole the forks will have worn a little and won't get stuck again.
Posted by CharlieCeng at 16:02