This is Tim's CZU27 Lucas ammeter, from his Matchless single - the very common 8-0-8A instrument that's found on many of our bikes, and it doesn't work. The bike doesn't charge, and the ammeter is off centre. Tim has a repro replacement but this is the original one from his bike, and so it's important that it's repaired and goes back to the hole it's been living in for the last 60 years. 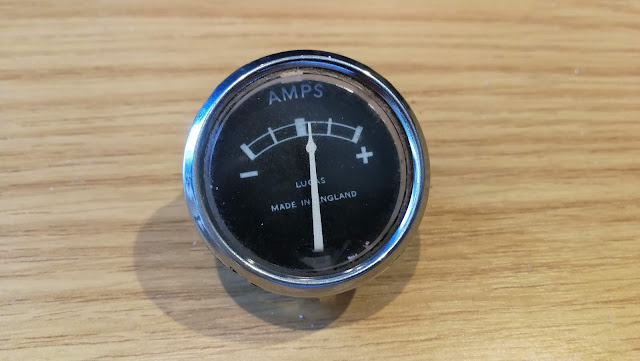 Here's Tim's bike - a G3LS that looks about 1957 to me, still has the pressed steel chain guard but has the new Girling shocks that replaced the jampots in that year: 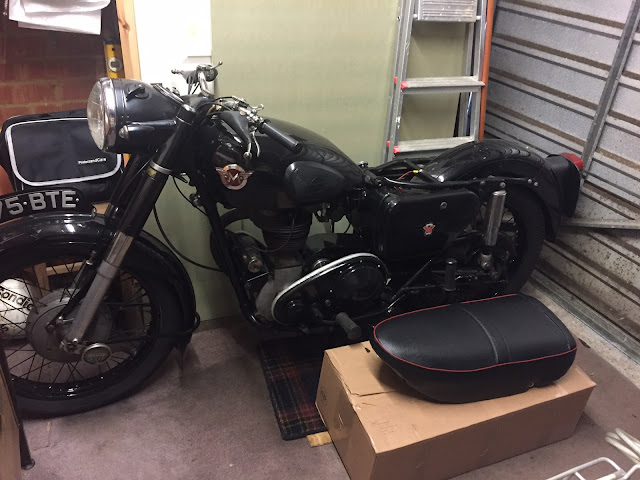 Checking the ammeter with the multimeter shows that it's showing open circuit, so we are going to have to take it apart.

These meters are made with an acrylic plastic housing that forms the lens and the body, and the separate back is glued in. The glue goes quite hard and brittle and can be scraped out - but there is often some case damage around the edges: 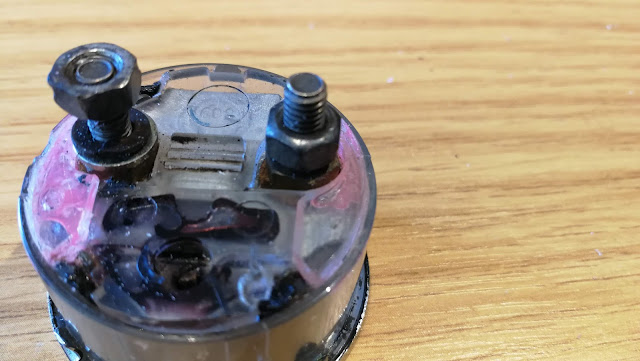 I use a tool ground from a small screwdriver to scrape the glue away: 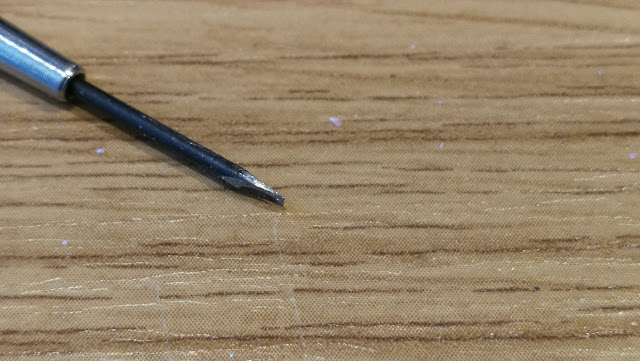 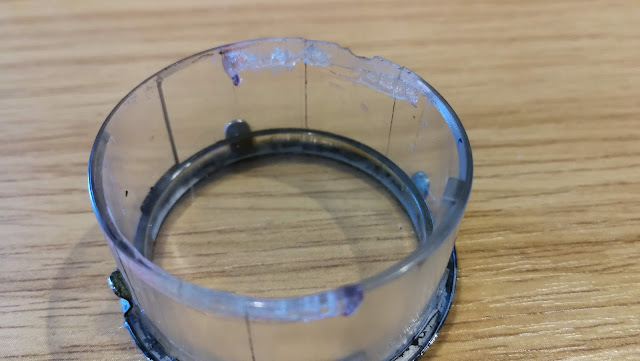 The dial usually gets caught up in the glue frenzy. It has four feet which clip to the base of the ammeter and these get glued down as well. Here are all the bits separated; notice how the dial has faded. There is a shadow of the needle on it: 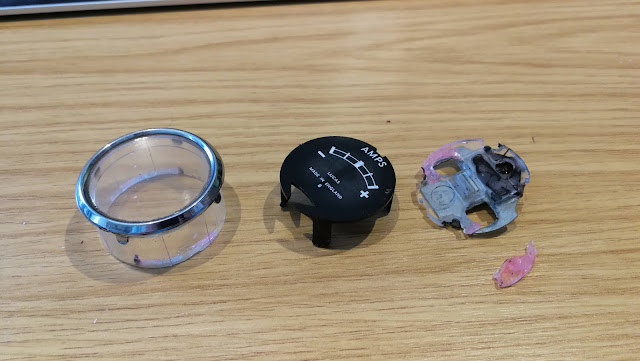 Here's the whole thing dismantled (dial is not in this shot), and there is a couple of washers missing: 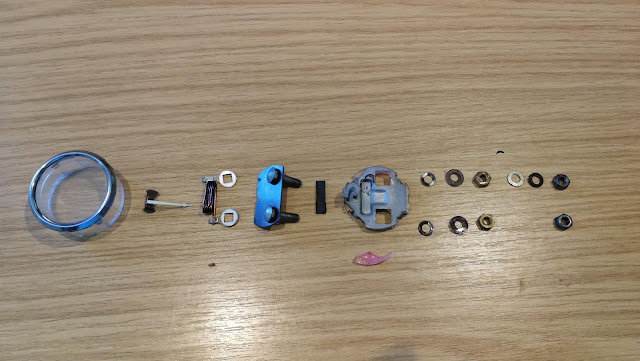 Closing in on the problem, we can see that the coil connection has broken - a fatigue failure, probably: 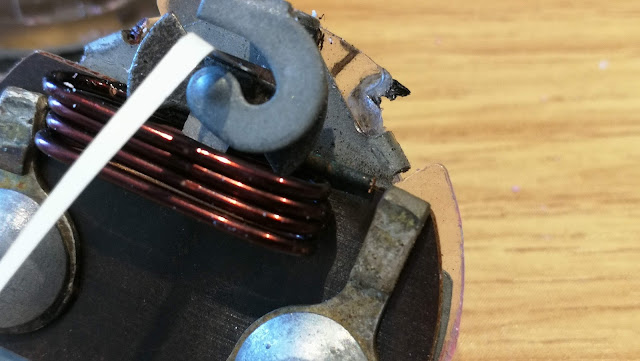 Here's the coil removed from the back plane: 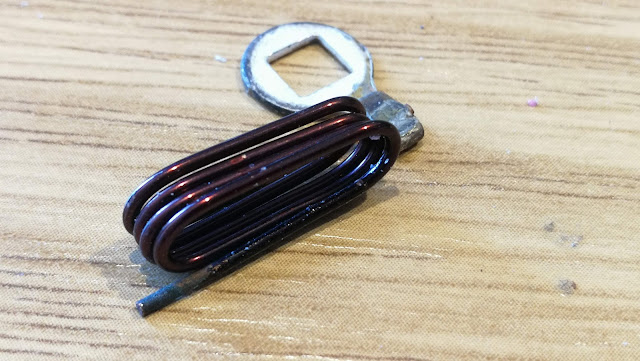 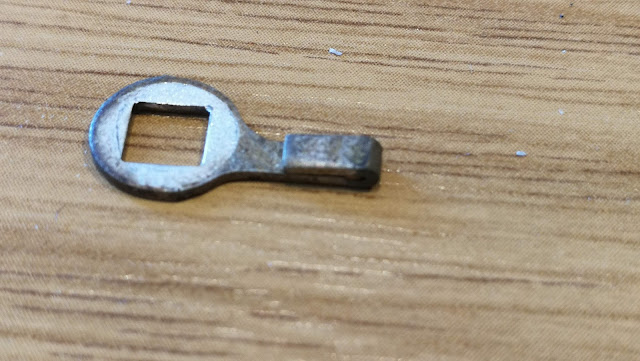 Easily repaired, we can open the swage on the loose eyelet, clean the end of the coil and re-swage. We'll solder this joint and then re-lacquer the coil. 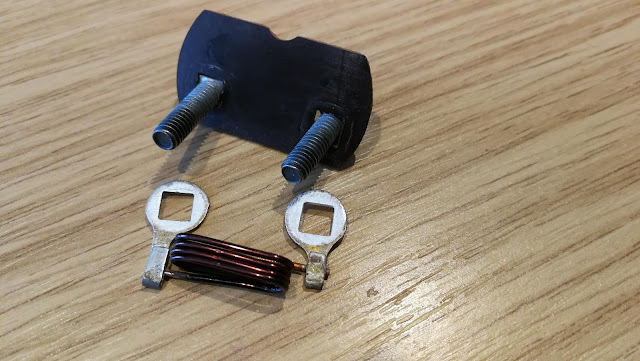 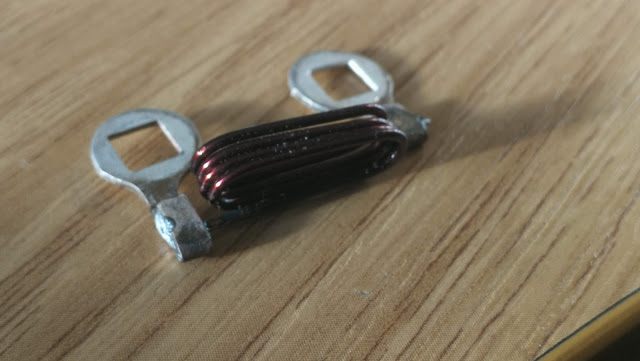 On to the back. It's straightforward to repair the break with a suitable medium-viscosity cyanoacrylate, but using a technique I picked up while repairing guitars we can drop-fill the missing bits as well. 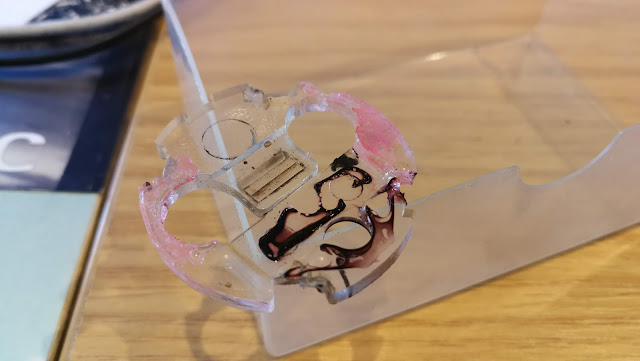 While I repaired the base, I noticed the part number stamped into the back plate: 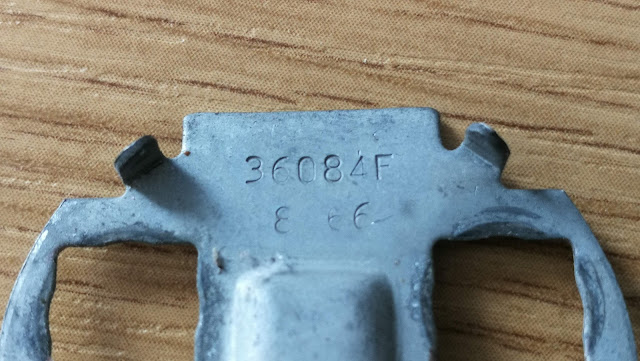 So this ammeter was made in August 1966. Fifty-two years service is not too shabby!

For reassembly, start with the coil, the large Tufnol plate and the two domed screws. assemble them with the small Tufnol washers like so. Make sure the magnet is in its recess in the back plate: 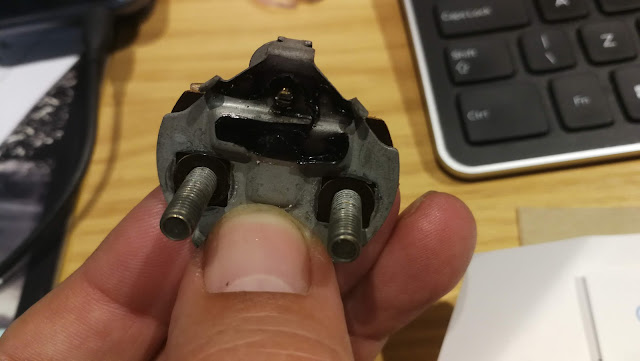 The two large Tufnol washers isolate the terminal with their brass nuts from the backplate: 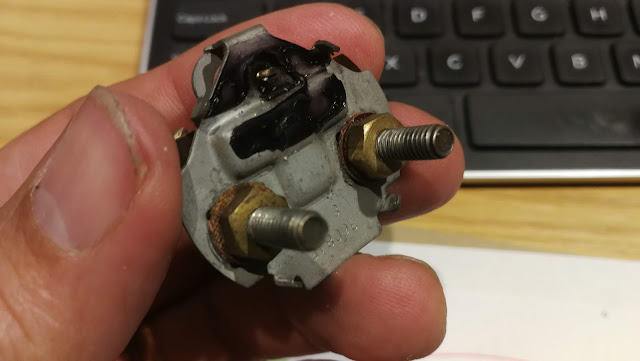 Remove this lot again and assemble the backplate to the repaired base: 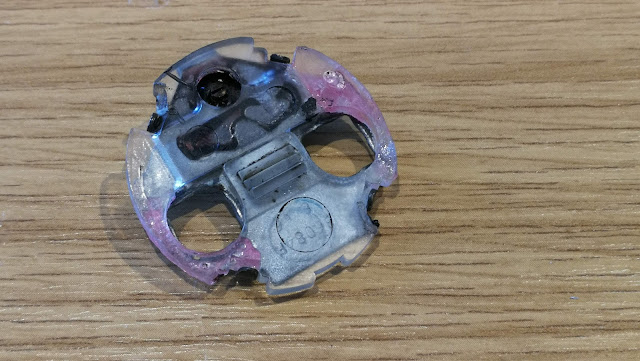 Add the backplate, terminals and coil: 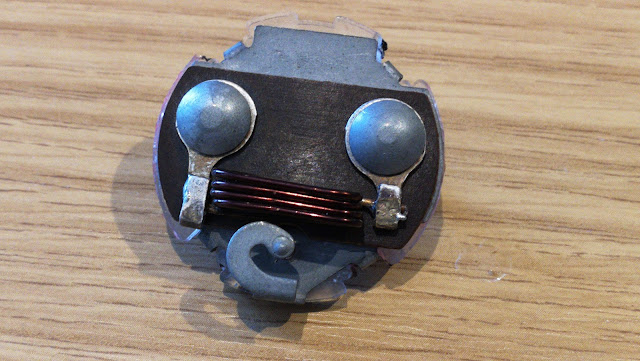 Assemble the Tufnol washers through the base and tighten the brass nuts: 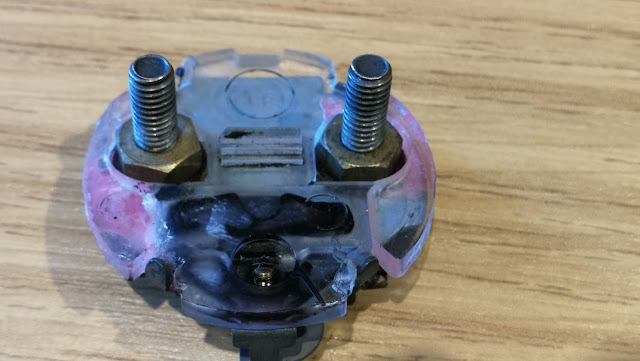 Use a watch oiler to lightly lubricate the needle pivots 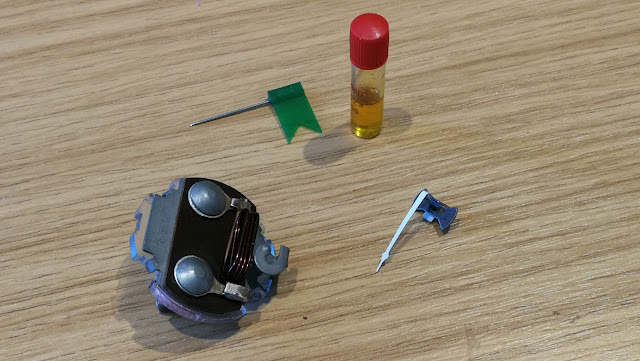 Assemble the dial onto the backplate assembly and add the needle. Screw down the needle pivot until it just moves freely, with no shake 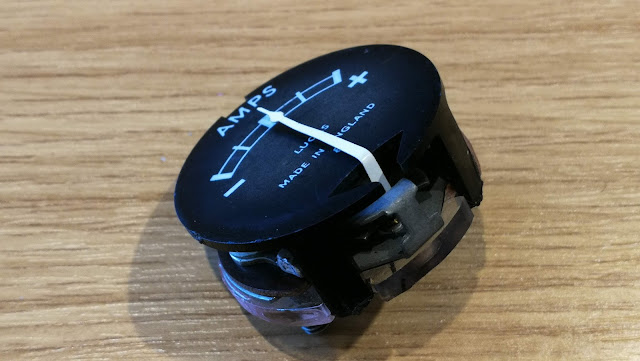 Test the ammeter in both directions. This set up is just a 9V battery driving an H3 halogen bulb - which draws quite a lot of current and serves to show the ammeter deflecting: 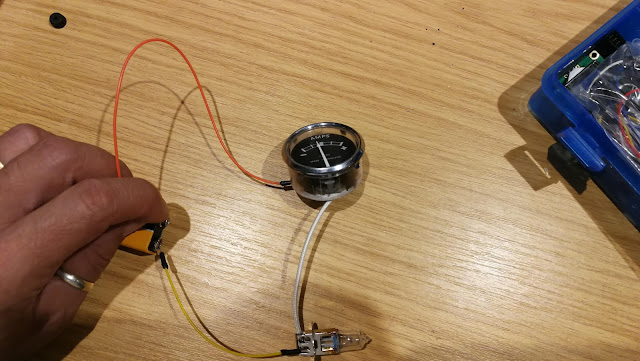 Reverse the polarity to drive the ammeter in the opposite direction: 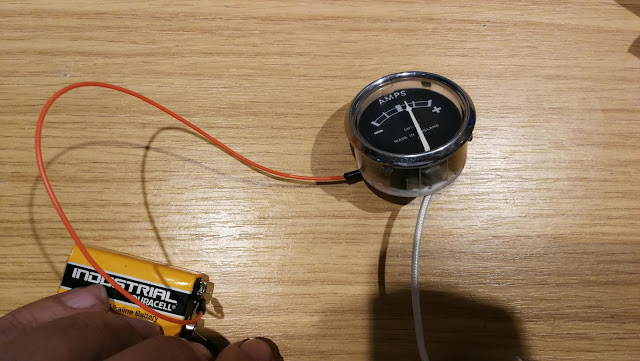 Make sure the dial has no damage to the legs. if the dial catches on the case, it will bend the needle when you remove the case. 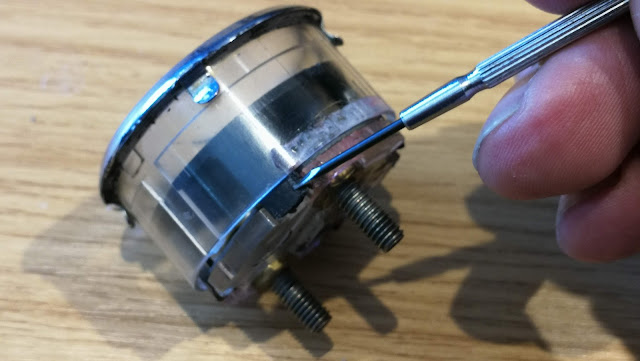 Seal the dial legs to the case with a suitable weatherproof glue, preferably one you can easily remove: 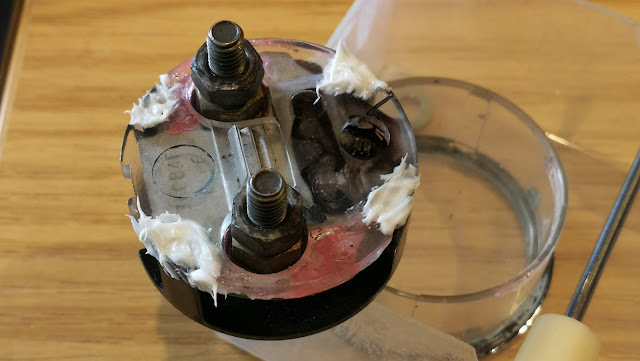 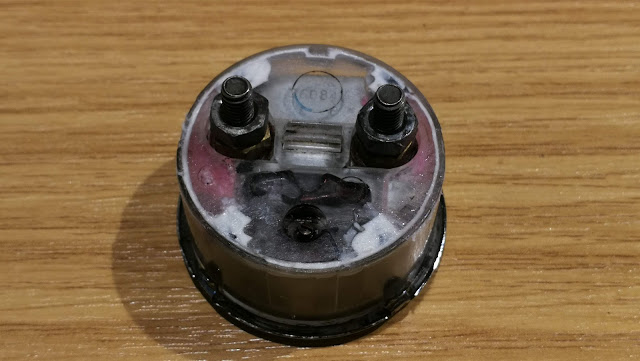 Seal the needle pivot thread with nail varnish and you are done. 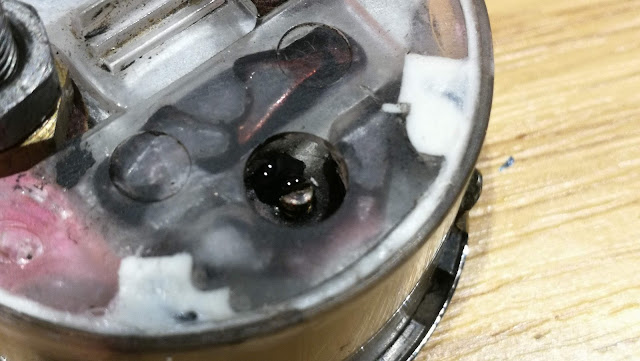 Brightspark have some useful information on these ammeters here:

As do the Vincent Owners Club: