Well, I've been looking for a girder forked single for a while and finally the right one at the right price has appeared. Advertised on Car & Classic as a 1948 Red Hunter, and located in Castiglion Fiorentino, a small town in Tuscany we have this rather splendid Ariel owned by Massimo Bruni. 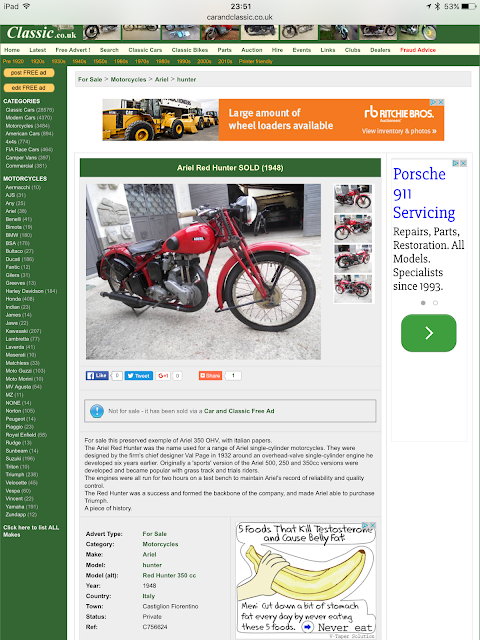 It was for sale at a good price, and after many, many emails and exchanges of pictures between myself & Nicola, I decided to buy my first Ariel single.

Thanks to Massimo & Nicola I was able to see the Italian registration papers for the Ariel and this picture, from 1953, shows the previous owner (the only one before Massimo) with his son on the Ariel. The previous owner died two years ago (in 2014) and his son decided to sell it. 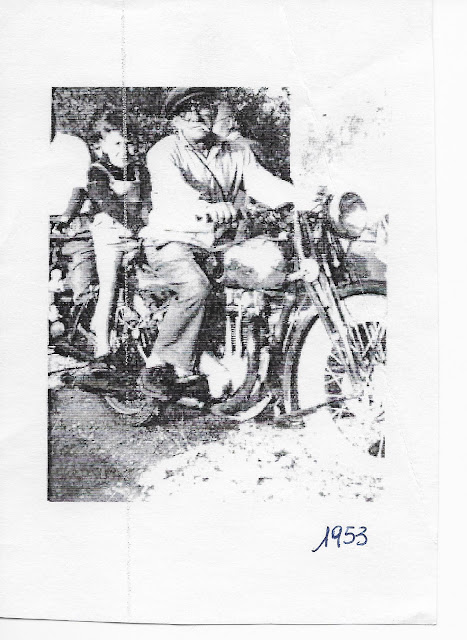 So what have we bought?

The previous owner was clearly not the first owner of the bike because, as keen Arielisti will have spotted, this is a fine, civilianised example of Ariel's war horse, the W/NG. A few key features: It has the field stand lug, the kickstart clip, the two tool boxes and the downward bend in the frame tubes that distinguish the military bike from the civilian NG; moreover the engine, frame and gearbox numbers all point to W/NG - we will have to wait and see what gear ratios it has. Other details include the unplated exhaust and the military gear lever.

Here it is emerging from the garage. Nicola's father is attempting to get it running again: 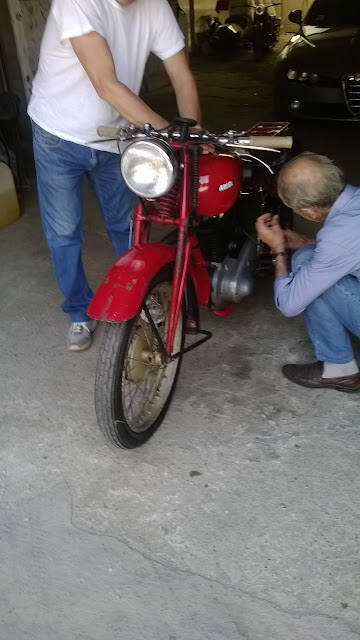 Out in the Tuscan sunshine, looking like a straight, well cared for and rather original W/NG, dressed up to look like an Italian bike from the 1950's. 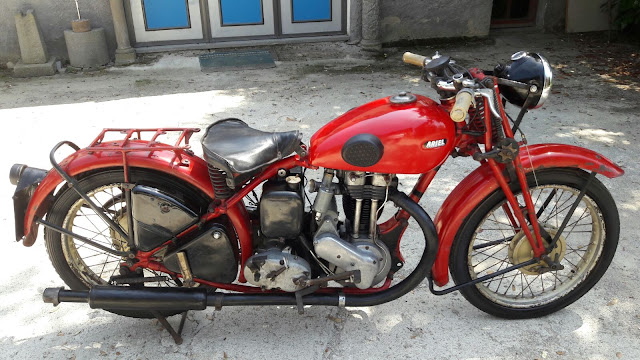 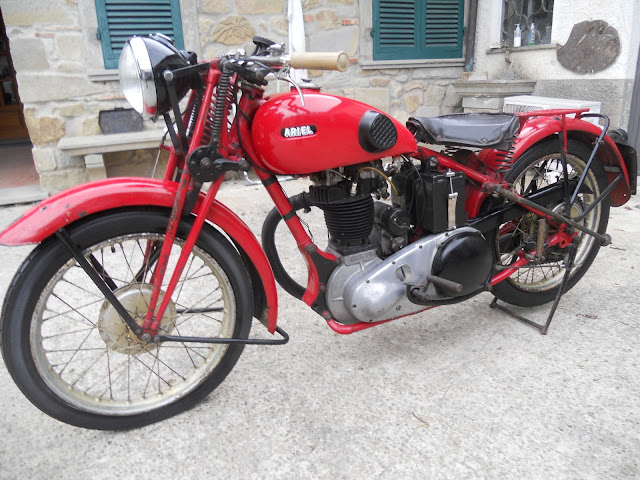 So is there much wrong?

That's an Indian reproduction headlamp. It's very shiny, and the switch doesn't have the 'tail only' position that a military bike should have, and it may be the 7" version rather than the flat glass DU42 6 1/2" version in use during the war (it is actually an Indian copy of the MU42 domed glass 6 1/2" version, and quite a good copy too); the S443M military speedo is also missing - hardly surprising as it's miles would have been rather useless measuring Italian kilometres; or maybe it was broken: 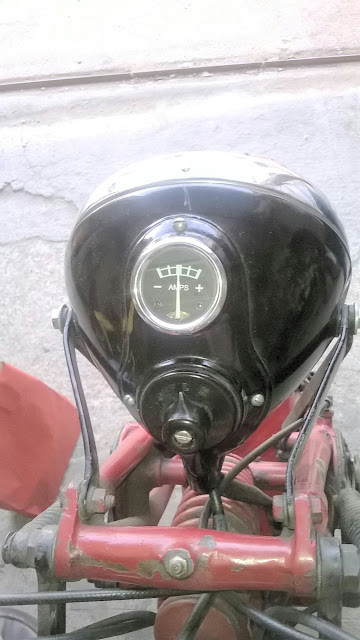 Here's a view of the engine. A few observations:
Otherwise it looks good! 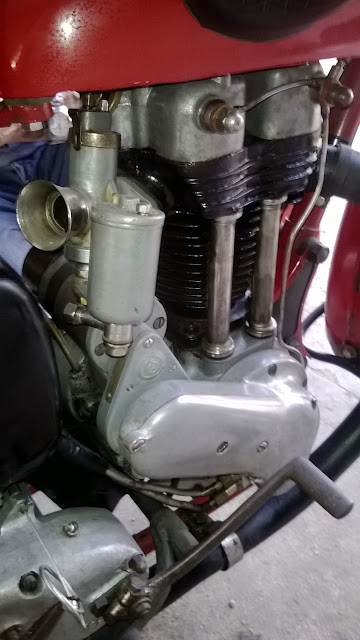 More Indian parts: the fuel cap and possibly the tank as well. Welded lugs for the fuel cap, no chain hole to retain the cap point to an Indian repro tank, but the picture is a little fuzzy. The square arch in the tank to clear the frame top member is different to my three SQ4 tanks, but (thanks to Steven Carter on the AOMCC forum) it appears that W/NG tanks are made like this. We will have to see when it arrives. Cap is very different from the Ariel design though. 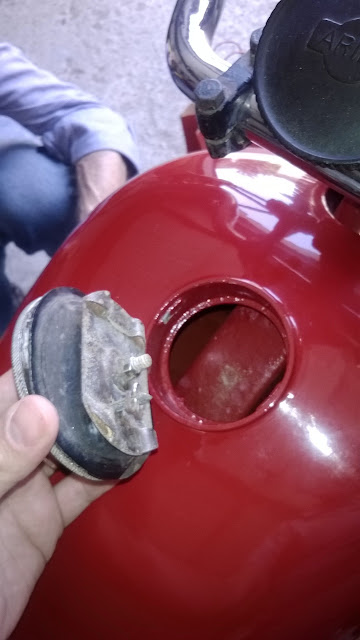 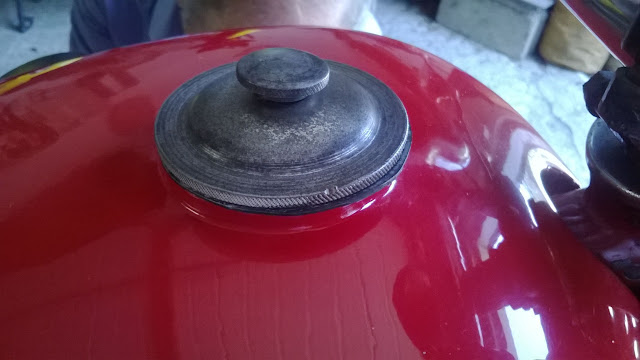 This is the SQ4 tank cap, showing what they are supposed to look like: 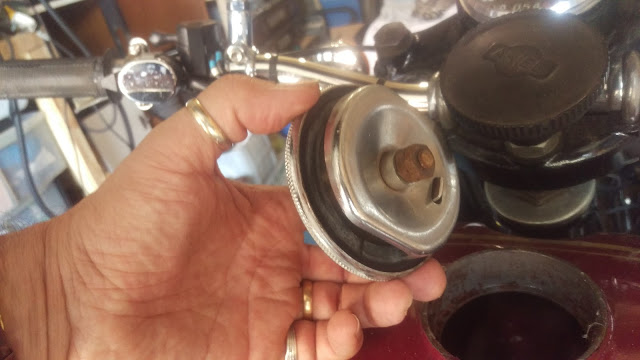 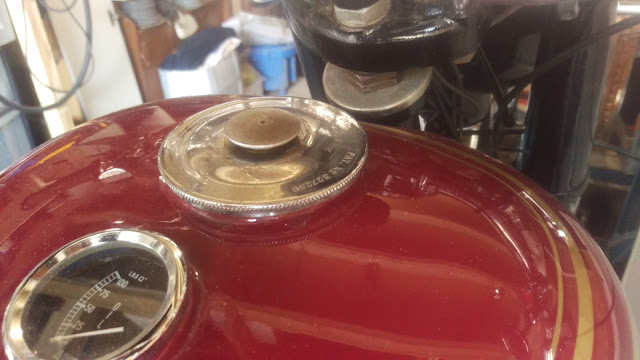 More general views. Non-standard knee rubbers - 1940 bikes have standard Ariel knee rubber arrangements, 1944 bikes have none. What is this? 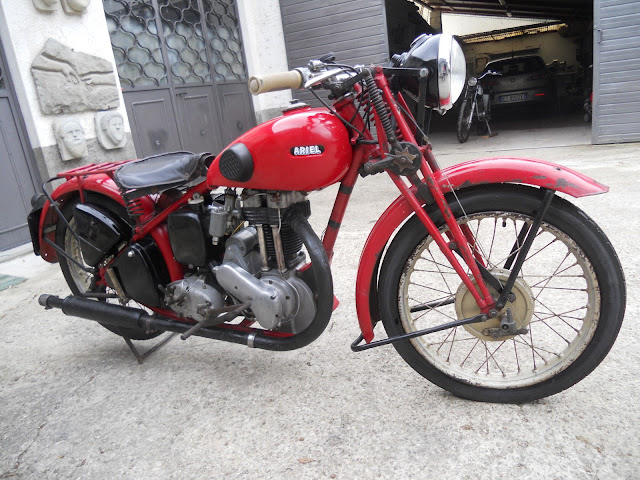 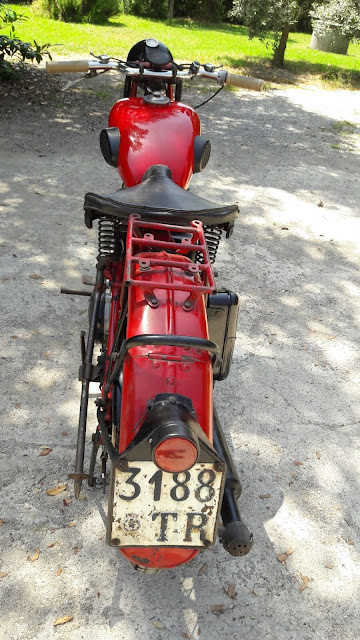 Original oil tank and gearbox; kickstart lever is missing but the clip is still in place. Footrests look home made: 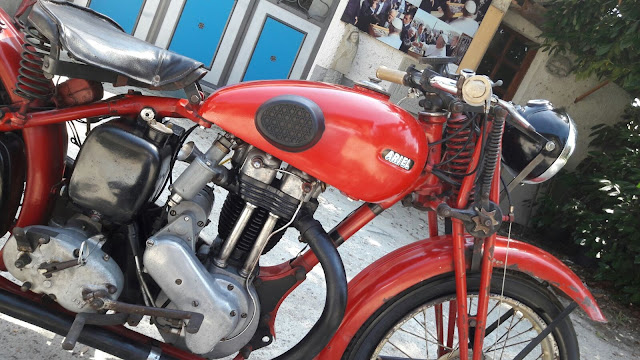 Exhaust pipe bend looks a little strange; probably a replacement - this bike is only 74 years old in a few months: 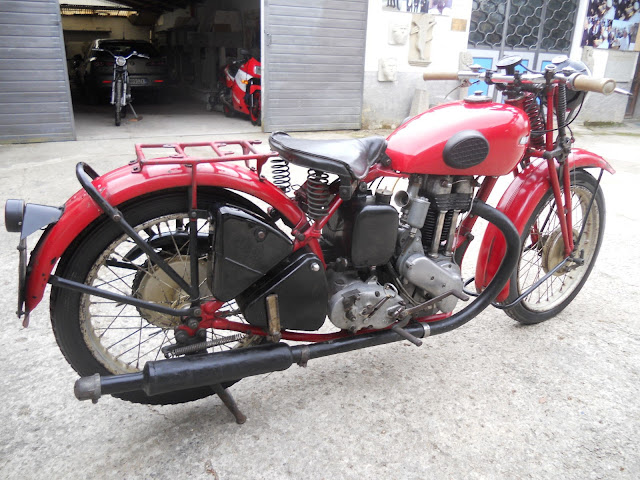 Original seat, mudguard stays & saddle; odd looking rack & rear number plate; dummy star washer missing from forks on this side; the lower chain guard is missing (but I happen to have one in stock): 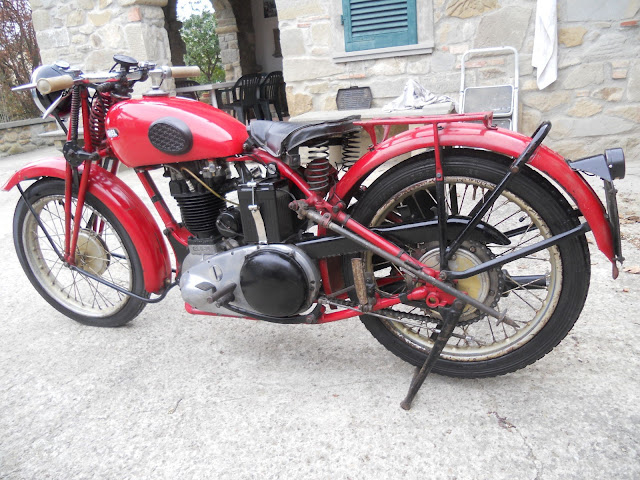 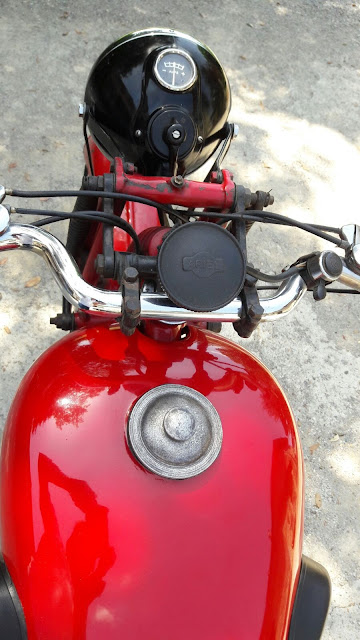 Italian style handlebars and controls - white grips, welded levers; not at all Ariel, but look like they have been there for a while? 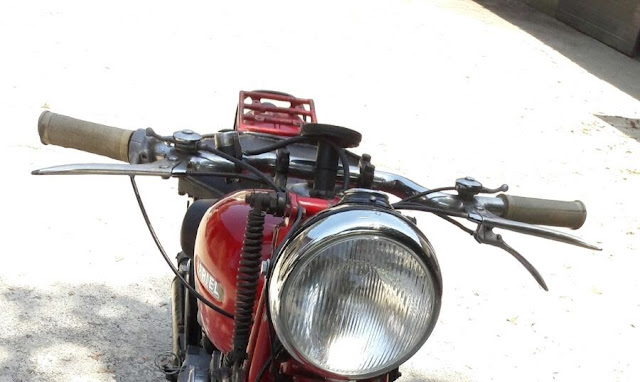 Original field stand! Original cable clips! Look at the blue pinstripe on the silver wheels. Why was it painted like this? 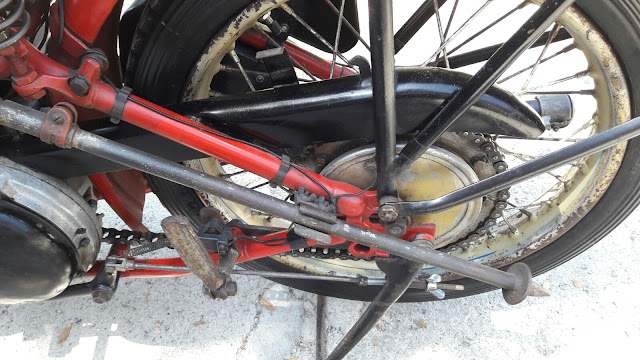 Original toolboxes with odd fasteners keeping them closed. Is there anything inside I wonder? 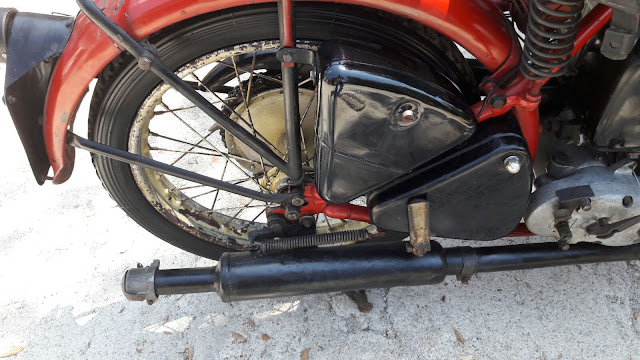 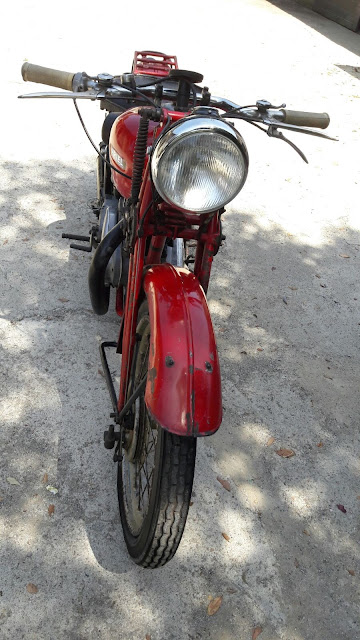 The numbers all add up to a late 1942 W/NG. The details are:
This points to contract number C12,450; the WD number could have been C4851938 or thereabouts; there were 2000 bikes built to this contract, plus 100 engines, 100 frames and 100 gearboxes. The contract was placed with Ariel on the 24th January 1942 and the machines were delivered between 11th August and 29th October the same year. 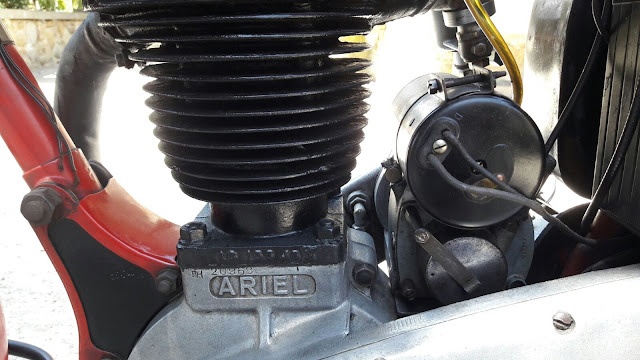 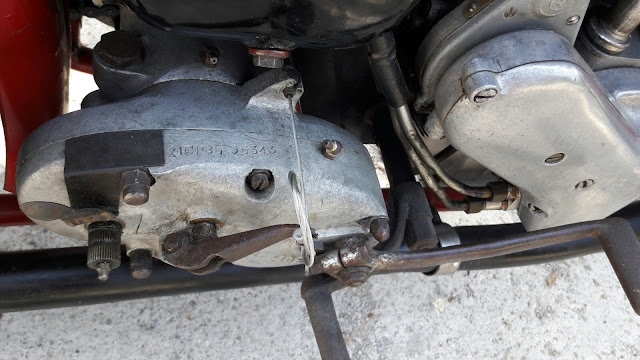 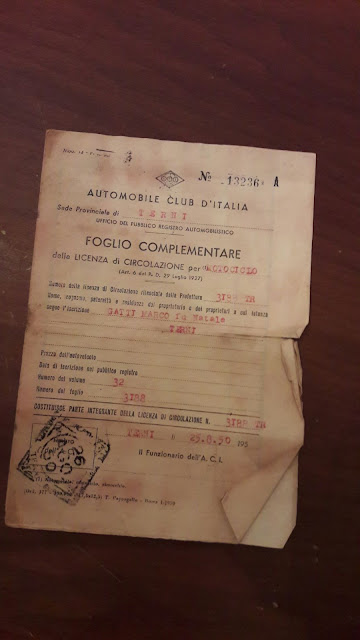 The registration book, with two renewals, is dated July 1960 and shows the bike sold by the ARAR, of which more later. Clearly the same bike - same registration, frame number etc.,  and even the tyre sizes are correct: 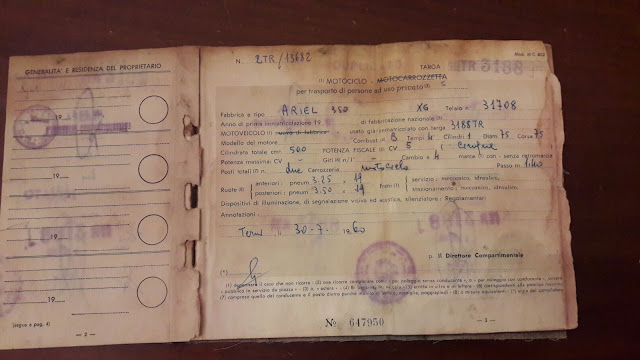 Secondly, I have the registration from the Automobile Club d'Italia licensing the bike to Sr. Gatti, from August 1950.

There are a few features which make me curious about this bike:

Now, this is either an enthusiastic owner from the past with a tired W/NG and a picture of a Red Hunter, or there is more to it. I will ask the Italian AOMCC and see where we go from there.
But how do I leave it? If it something special I will leave it; I rather like the idea of a demilitarized military bike, but it would look the part for '40's weekend in green...

First thing is to get it checked out by the Machine Registrar and AOMCC Archivist, and then we can start the registration process; then we need to sort out some parts & do some work:

Of course, some of these things are essential, and some will not get done for years. The main thing is to get it going, and spend some time blatting about Norfolk. The fun will begin when it arrives next week!
Posted by CharlieCeng at 13:07