The piston that came out of the W/NG surprised a few people. It looked like it had been wire wound at some point in it's life. It was flat-topped and had an oil control ring, both features that differ from standard. 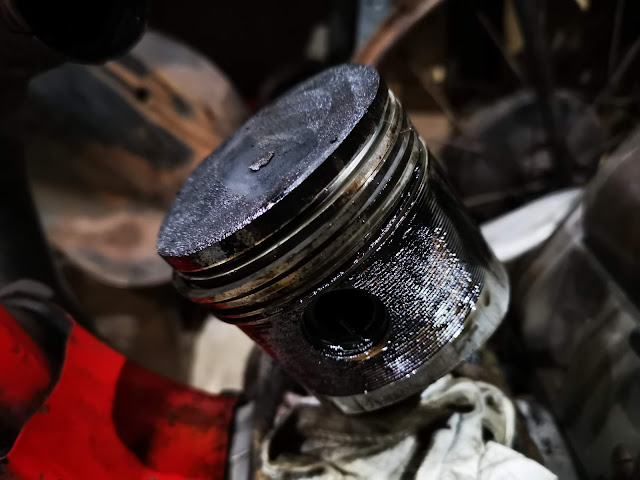 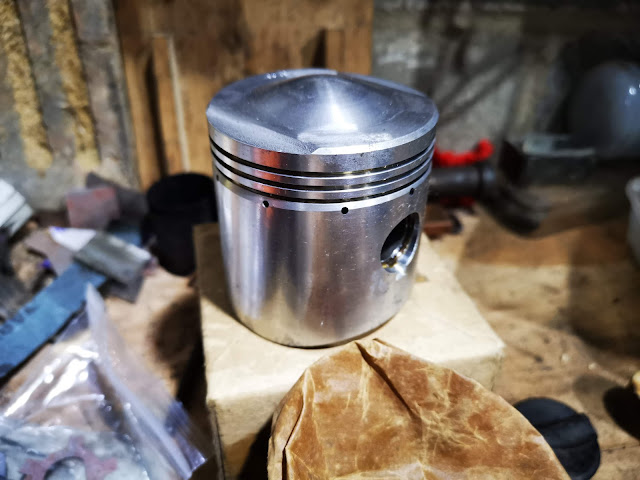 The old piston was not in a happy place when it came out. The top ring was in at least three pieces - at least, I found three pieces. Not enough to make a whole ring... 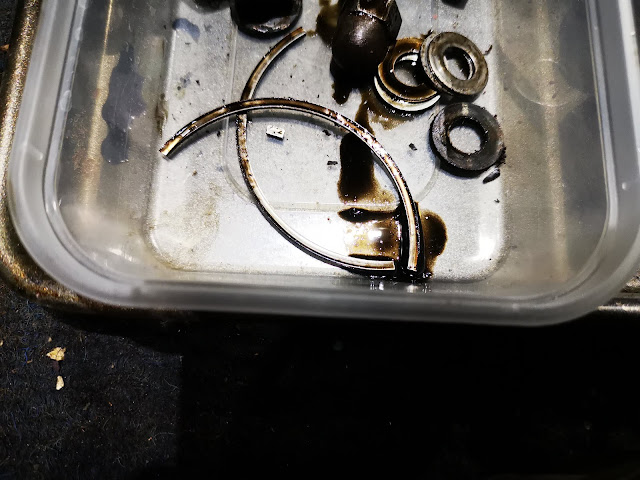 The small end was also in a pretty bad way and in fact the rod eye turned out to be oval. The bush had no oil slot cut in it either. 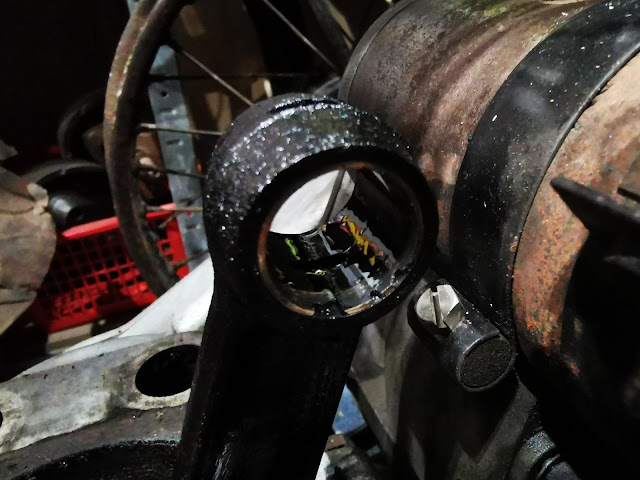 I had the barrel rebored and honed to suit the new piston by L.A. Whitmore of Briston, Norfolk - an excellent little company which unfortunately is no more. The rebore took out most of the wear. 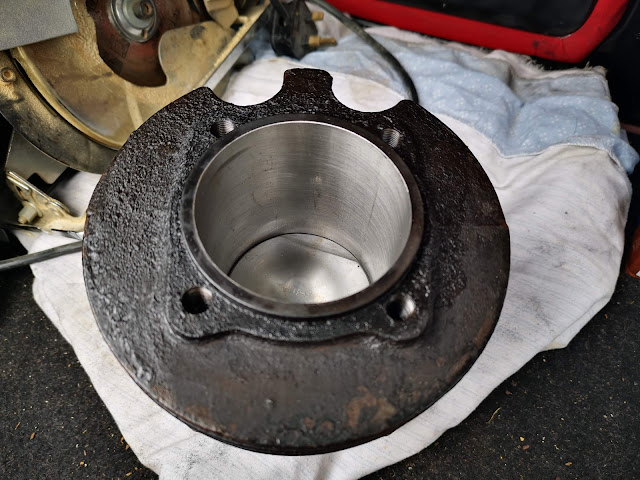 Much later, after I had finished the bottom end I cleaned up the barrel using my bench-mounted and my flexible wire wheels. There is actually a fin repair here as well - that must have been done in Italy. 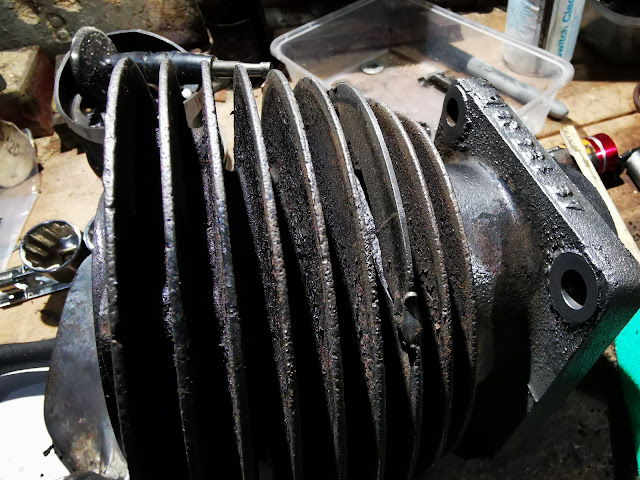 I followed this with two coats of engine enamel from Paints R Us which appears to be excellent. We'll see when it has been in service for a bit. 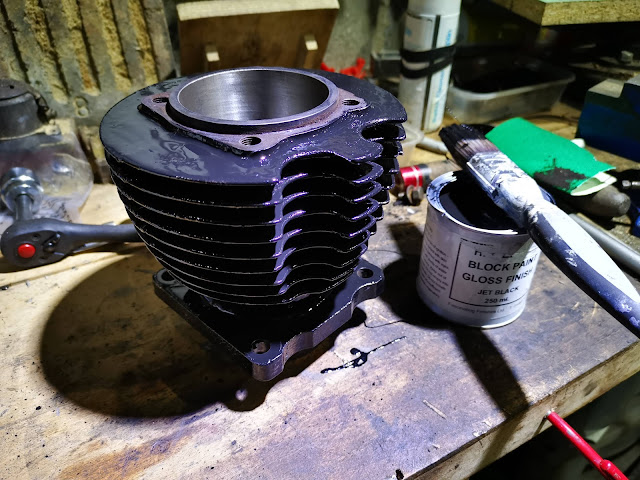 For my next trick, ladies and gentlemen I will replace the barrel studs after cleaning them on the wheel. I've put them in with Loctite 243 medium strength thread locker. 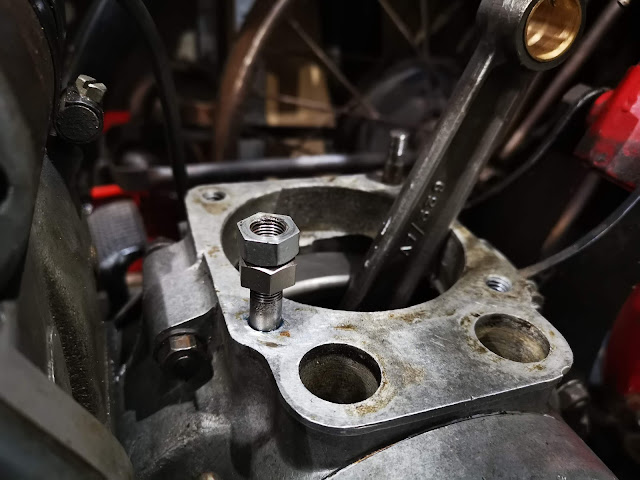 I need to check the rings. They are all showing a 0.012" gap - rather large, but well with Ariel's 0.030" limit and they are very difficult to measure as they are cut at an oblique angle and consequently any sideways movement opens the gap. 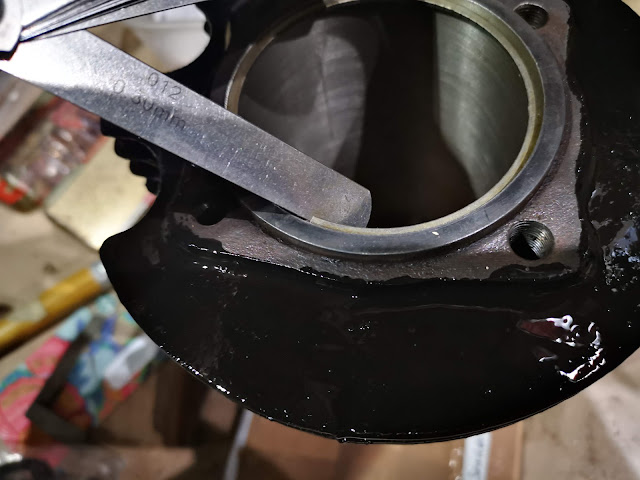 Next, I'll check the fit of the gudgeon pin in the small end. It slides in easily with no rattle; as I would hope. Alpha Bearings reamed this to Ariel specification and made a bush to suit the small end eye. 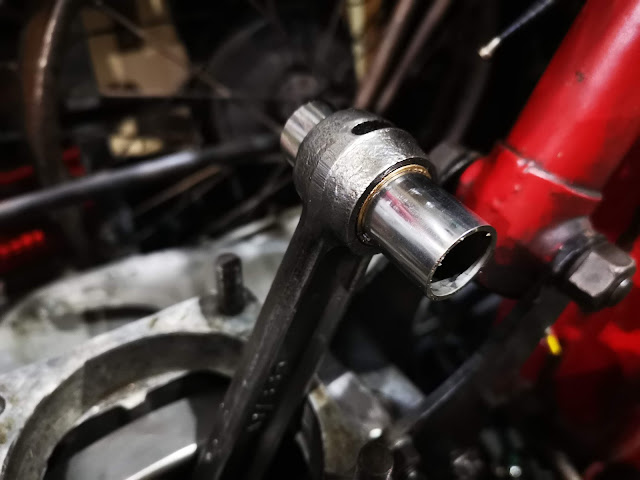 Five minutes with the Rothenburger has the piston warm enough to receive the pin and a few seconds later it is on. Next job is to fit the circlip - but cover the crankcase mouth before you try. The circlip is bound to ping off somewhere and the last place you want it is in the crankcase. 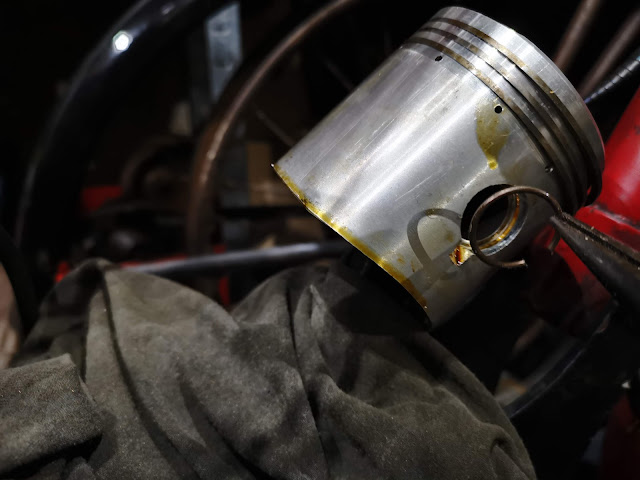 Don't try this delicate operation without gloves if the piston is still warm, and make 100% sure the circlip is seated correctly: 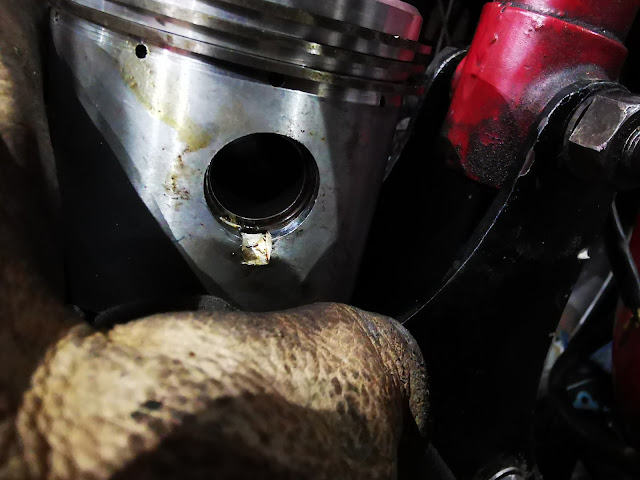 I don't have a piston ring compressor - I maybe should have bought one but ever since building BMC A series engines when I was much, much younger I have used this approach - a strip of tin and a ty-wrap. Works a treat if you get the tension on the ty-wrap just right for the barrel to push the tin down and off the rings, and it's dead cheap for when you need four of them. 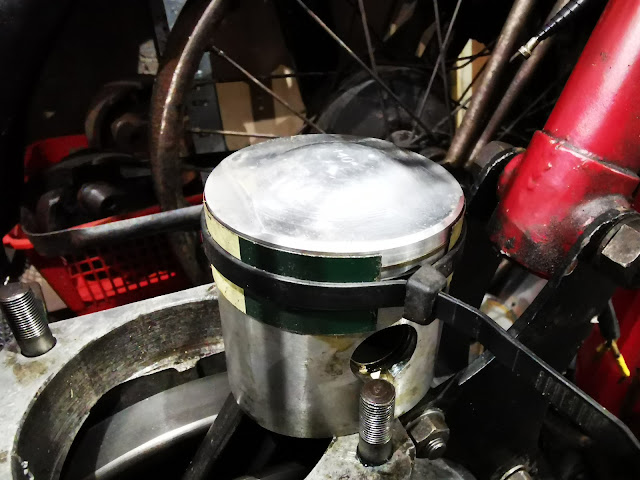 See? all fitted with no drama, though since writing this I remembered I had intended to fit the engine plate covers before the barrel went on - access is a bit more restricted now.

That's Morris SAE50 in the bore. Next job is to time the ignition, finish fitting the magdyno and the chain cover and start preparing the cylinder head.